Apple and A24 present a third (brief) preview of what in Spain we will know as the ‘Macbeth‘by Joel Coen, this being the first film he has directed alone and without the help of his hitherto inseparable brother Ethan. A story of murder, madness, ambition and intrigue that will be released in North American theaters within a month, on December 25, and then, three weeks later, on January 14, 2022, will be released worldwide on Apple TV +.

Joel Coen’s brave and creative reading of the Scottish play is, according to Apple herself, a work full of severe chiaroscuro and captivating rage. It is a film of overwhelming anguish that examines, with fascination, a world devastated by greed and unbridled ambition.

Denzel Washington, in a very introspective register, plays the man who wants to be king, and a Machiavellian Frances McDormand is his Lady. Both offer meticulous interpretations of jaded characters, a couple who end up plotting a political murder and maddened by guilt, after hearing the evil predictions of a trio of “fateful sisters” (played by Kathryn Hunter).

Despite being influenced by the bleak visual design (and screen format) of the classic 1940s adaptations directed by Laurence Olivier, and by the bloodthirsty medieval folly of the ‘Throne of blood’ Akira Kurosawa’s tale, Coen’s tale of noise and fury is unmistakably his. This version reflects the current moment through a terrifying story about an amoral assault on political power that, like its protagonist, mercilessly advance towards hell.

Bertie Carvel, Alex Hassell, Corey Hawkins, Harry Melling and Brendan Gleeson round out the main cast of this A24 and IAC Films production for Apple Original Films.

Joel Coen is the writer and director of this new adaptation of the famous play by William Shakespeare. In addition, Coen is also a producer alongside Frances McDormand and Robert Graf. The film has in its technical team Ellen Chenoweth as casting director, Carter Burwell as composer, Mary Zophres as costume director, Lucian Johnston and Reginald Jaynes as editors, Stefan Dechant as production designer, or Bruno Delbonnel as director of photography. among others.

Click here to see it on YouTube.
This and other videos you can find on our Dailymotion channel,
or in the section of Movie trailers and videos of the web. 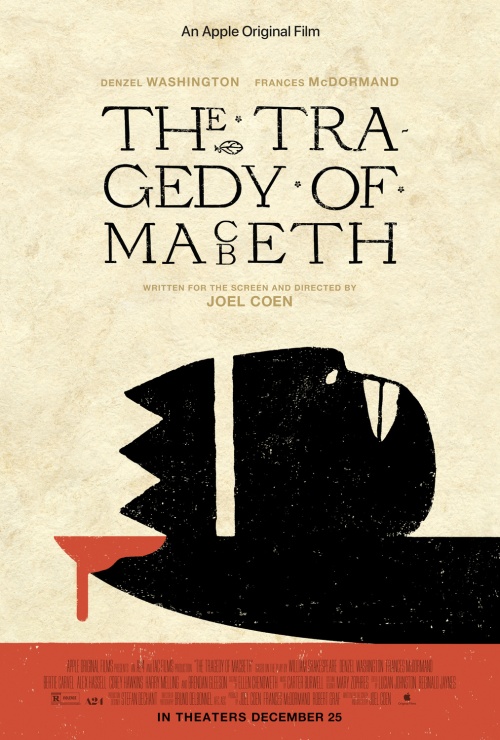