A modification of WhatsApp is hitting hard in the download of APKs: the one called as WhatsApp Android with iOS theme It is a mod that quite faithfully imitates the look of the iPhone messaging application. Of course, under this aspect there are notable security and privacy risks.

The WhatsApp application is similar on Android and iPhone, although each one has its own aesthetic aspect. With the official app there is no way to change the design, but popular modifications such as GBWhatsApp or WhatsApp Plus allow it. And currently a modified version of WhatsApp with an iOS theme is circulating, an app that puts mobile phones that install it at risk. We have analyzed the APK to verify it.

A modified version of WhatsApp with an iOS theme 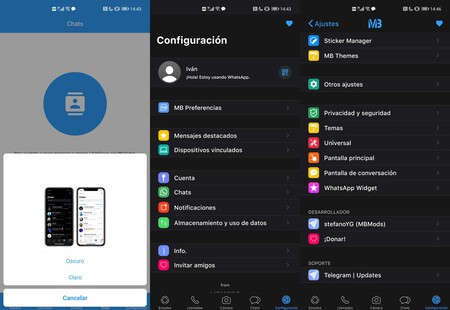 Perhaps you have searched for the WhatsApp iOS application on Android and have come across several APKs of dubious origin, which is just what happens: the official app cannot change the theme. Therefore, our recommendation is that you refrain from installing a messaging application that is not original, both because of the risk of being infected by malware and because of the possibility that WhatsApp ends up blocking your account.

The WhatsApp application for Android with the theme of iOS is based on the latest version of GBWhatsApp, an adaptation of some developers called “FouadMODS”. The mod is version 9.05 (specifically, FOUAD iOS), includes a theme with an interface similar to that of the iPhone and, on the rebound, it installs a Trojan and malware capable of injecting ads (malware): this is revealed by the analysis of Virus Total. What’s more, the app asks for permission to install APKs, a mechanism that opens the door to the download of any malicious software (in theory it is to install themes and plugins).

As we usually do whenever we talk about modified applications that manage highly sensitive personal data, our recommendation is that don’t download any WhatsApp mods, whether or not it includes the iPhone theme. Surely your account will not end up blocked (FouadMODS modifications integrate various anti-blocking systems), but your mobile will probably end up flooded with ads. All for an aesthetic aspect that does not provide tangible advantages to WhatsApp either (mods do offer some useful options).

Analysis in Total Virus of WhatsApp Android with iOS theme

We have tested the WhatsApp mod with the iOS theme and the look is very accomplished. However, our recommendation is that you do not install it: the risks that your mobile phone is infected, or that your account is in danger, are high.