The Seven Seas superyacht, about 86 meters long, it sold a few weeks ago after spending more than 10 years in the hands of the film director Steven Spielberg. The boat was built in 2010 by the Dutch shipyard Oceanco, to later be transferred to the renowned filmmaker.

The Seven Seas has a estimated price of $ 200 million, and is capable of accommodating up to 20 guests without problems, which can be distributed in its 9 luxurious cabins; who will also be served by the 28 members of the crew.

As expected, the boat has many luxuries and comforts for passengers to enjoy sailing days to the fullest, such as a fully equipped gym, a helipad, two cinemas and a spa and massage room. In addition, it has a striking glass elevator that takes you to most of the decks. 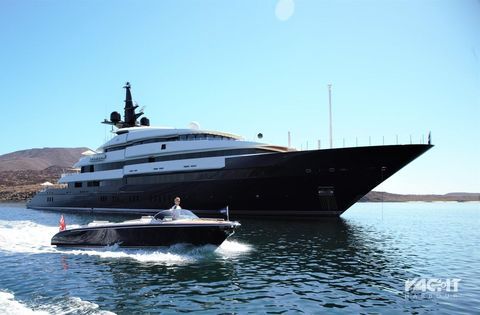 As if this were not enough, the yacht includes 3 auxiliary boats to transfer passengers. All of the first level and with very comfortable interiors with leather details.

This beautiful superyacht has a steel hull and teak decks, and can travel to a maximum speed of 19.5 knots (35 km / h), while the cruising speed is 16 knots (29 km / h), all thanks to two powerful MTU engines.

In recent years, it was common to see Steven Spielberg sail aboard the Seven Seas through the Mediterranean Sea, off the coast of France, during the realization of the renowned Cannes Film Festival.