After the significant correction in the previous week, Bitcoin remains in consolidation mode. A temporary jump above the $ 46,000 mark had not proven sustainable on Sunday. Instead, at the beginning of the week, it is initially a further three percent downhill.

As long as this is not the case and Bitcoin remains comparatively stable at the current level, the horizontal resistance at around $ 46,000 and the 200-day line, which runs just below it, will remain within striking distance. If we succeed in conquering these two hurdles in the long term, an important step towards a rebound would be taken after the sharp correction in the previous week. 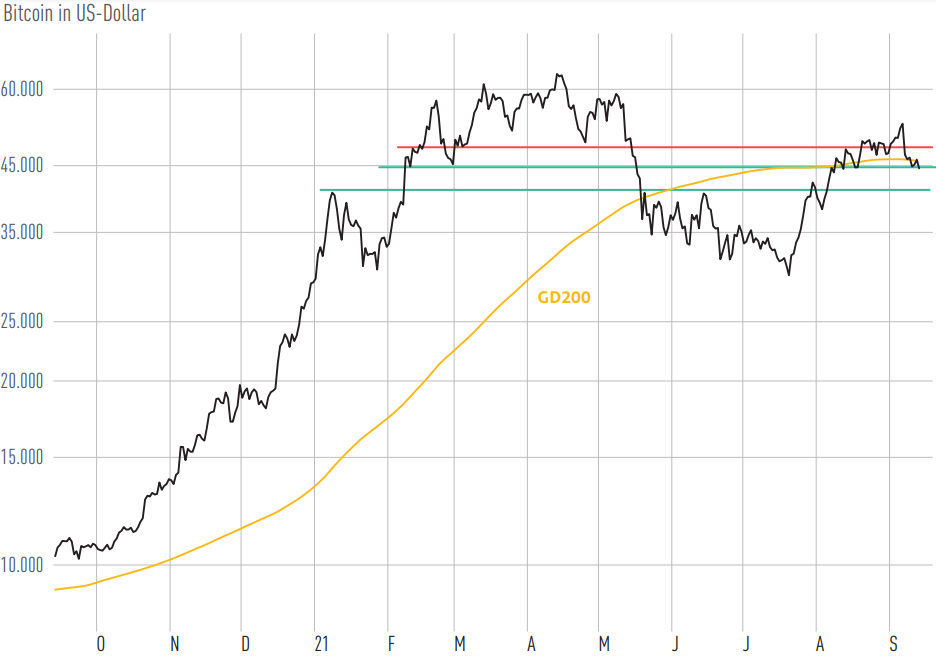 Historical patterns give courage for the future

Although the dynamic price recovery has been dampened in the short term since the end of July, the long-term outlook has not changed, according to industry experts. Crypto investor Lark Davis recalled via Twitter that Bitcoin was traditionally rather weak in September and often good for an upward breakout in the final quarter. He therefore still believes that an increase to $ 100,000 by the end of the year is possible.

Remember more often than not #bitcoin has a red month in September and a big price move in Q4. BTC can still hit 100k by end of year.

Crypto analyst Filbfilb also sees a lot of room for improvement in Bitcoin and refers to a graphic from the trading portal Decentrader. There, the price development of Bitcoin after the halvings in 2013 (red), 2017 (blue) and between 2020 and today (green) is superimposed. The expert sees strong parallels to the share price development in 2017 – which gives hope for further price gains and new highs if the correlation continues.

In the short term, the situation on the Bitcoin chart has clouded over, but that is no reason to bury your head in the sand. In the long term, the SHAREHOLDER sees the digital reserve currency still in the fast lane. Invested investors therefore stick with it. The brave can use a stabilization at the current level to get started.