After the flash crash on Tuesday afternoon, the deep red signs clearly dominate the crypto market on Wednesday morning as well. Bitcoin is trading around 14 percent weaker at around $ 45,000 on a 24-hour basis. Some large altcoins even lose more than 20 percent.

A few hours before a law came into force in El Salvador on Tuesday that gave Bitcoin legal tender status for the first time, the crypto market collapsed within minutes. Bitcoin briefly slumped to the $ 43,000 range, but from there quickly started a rebound to $ 47,500 (THE SHAREHOLDER reported).

In the meantime, however, the bulls seem to be running out of breath, because on Wednesday morning the Bitcoin staggered again towards $ 45,000 and the important chart marks that are there. In addition to the horizontal support in this area, this is above all the 200-day line, which it now threatens to fall below in the long term.

Even a concerted buying campaign, for which numerous Bitcoin fans all over the world had arranged to meet via Reddit and Twitter to celebrate “Bitcoin Day” in El Salvador, fizzled out in the night without any effect. 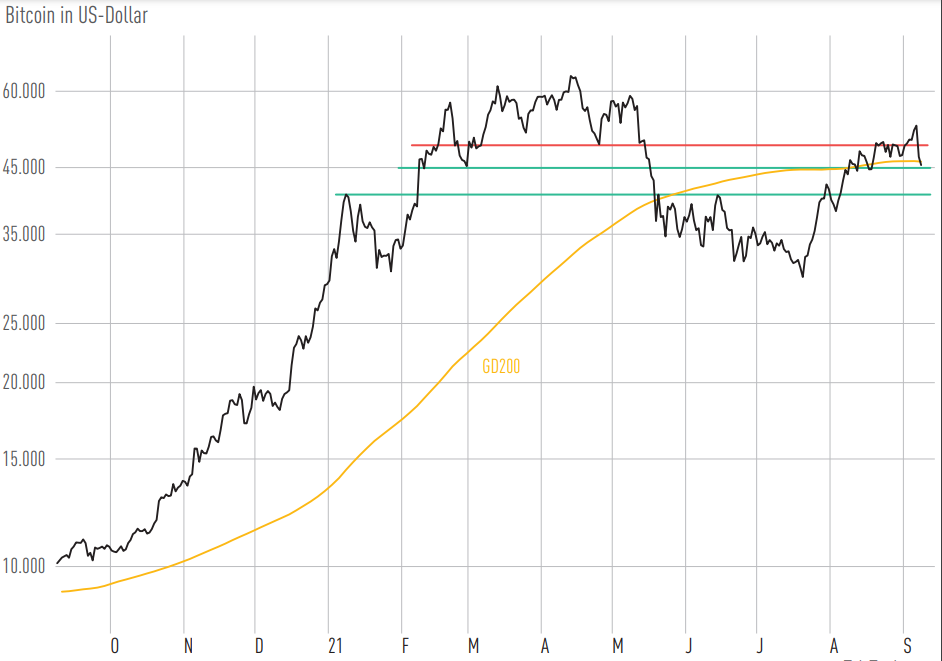 Meanwhile, the search for the causes of the sudden price collapse is ongoing. Industry experts say that extreme leverage positions are partly responsible for this. According to information from the portal CoinDiffer positions in the derivatives market with a volume of $ 3.54 billion were liquidated. It wouldn’t be the first time that the implosion of heavily leveraged positions turned a normal correction into a flash crash.

Amount of Liquidations in the past 24 hours by exchanges in total $ 3.54 was liquidated!

In the past 24 hours, 330,243 traders were liquidated. The largest single liquidation order happened on @HuobiGlobal #BTC $ BTC value $ 43.7M

The severe setback does not only affect Bitcoin, but has cost the entire crypto market almost $ 400 billion in market cap. There is not a single winner among the 20 largest digital currencies on Wednesday morning; instead, losses in the double-digit percentage range are more the rule than the exception.

It hits particularly hard XRP, Binance Coin and Uniswap, which lose more than 20 percent over a 24-hour period. With most coins, the partly significant price gains of the past week have now been consumed.

The sharp correction is undoubtedly a setback for the recently clearly bullish chart image and the optimistic sentiment for Bitcoin and many Altcoins, but they have always been part of the volatile crypto market. This does not change anything in the long-term outlook for Bitcoin and Ethereum, which is why THE SHAREHOLDER sticks to his positive basic assessment and initially sees no need for action.