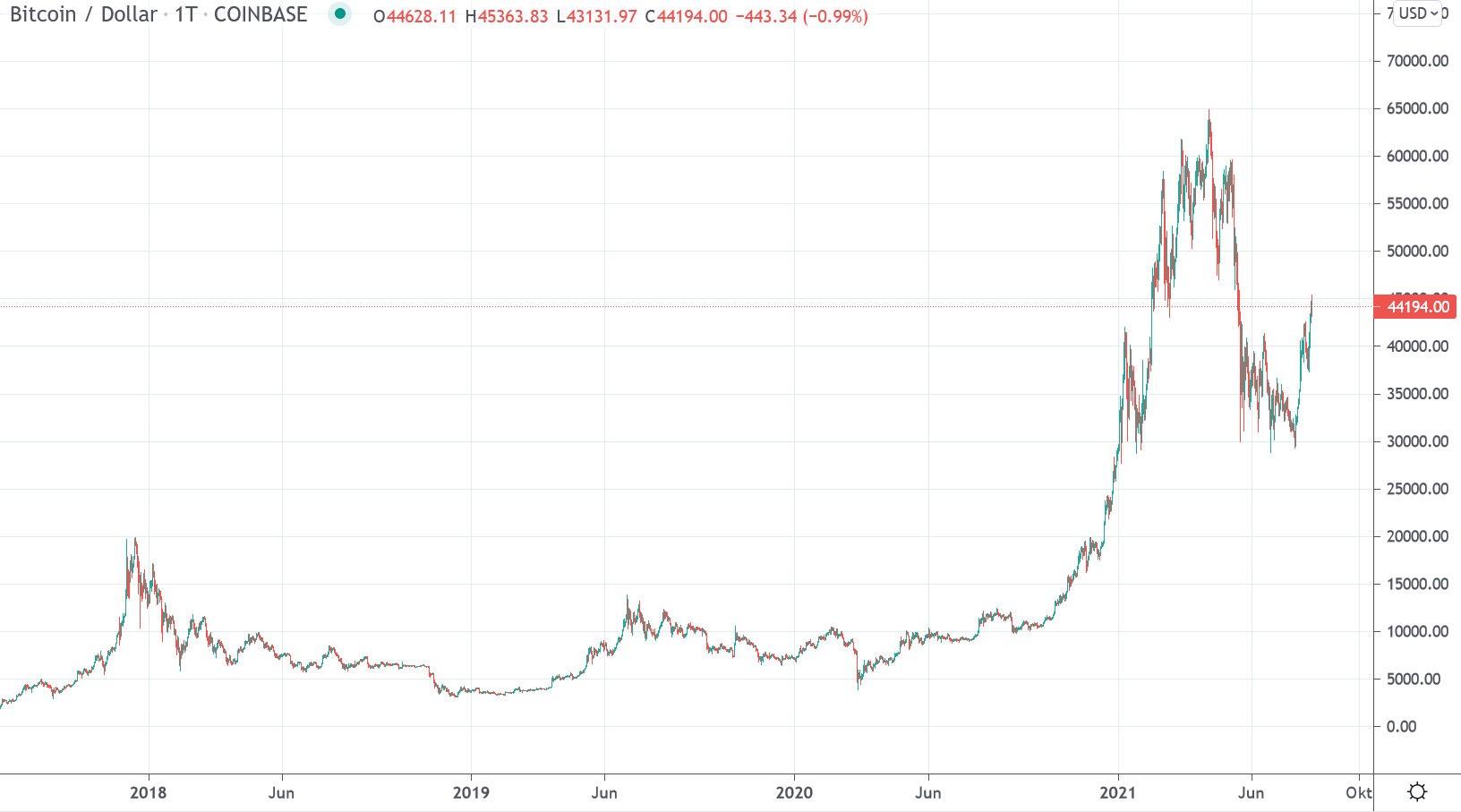 At the beginning of the reporting week it looked as if the newly climbed price area above the 40,000 mark could not be defended. The strong upward movement of the previous week was followed by an initial correction on Sunday, which brought the price back to USD 39,149 by Monday. On Tuesday, Bitcoin went down again from the market at USD 38,191. The first purchases began on Wednesday, bringing the price back to USD 39,722, just below the USD 40,000 resistance zone. A strong signal was sent on Thursday. At the beginning of the trading process, levies led the price below the lows of the previous trading sessions and thus triggered some “stop-loss” orders. Within the day, however, there was a strong countermovement, which led back to USD 40,888 – and thus over the resistance zone. The bulls took advantage of these good technical conditions on the following two trading days. On Friday, a daily closing price of USD 42,869 was achieved, which was already higher than the highs of the previous week. At the weekend, the positive momentum continued on Saturday and again brought a higher closing price at USD 44,637. On Sunday, profit-taking at the end of the week led to slightly lower price levels than the day before.

Breakout from the upper area of ​​the three-month price corridor 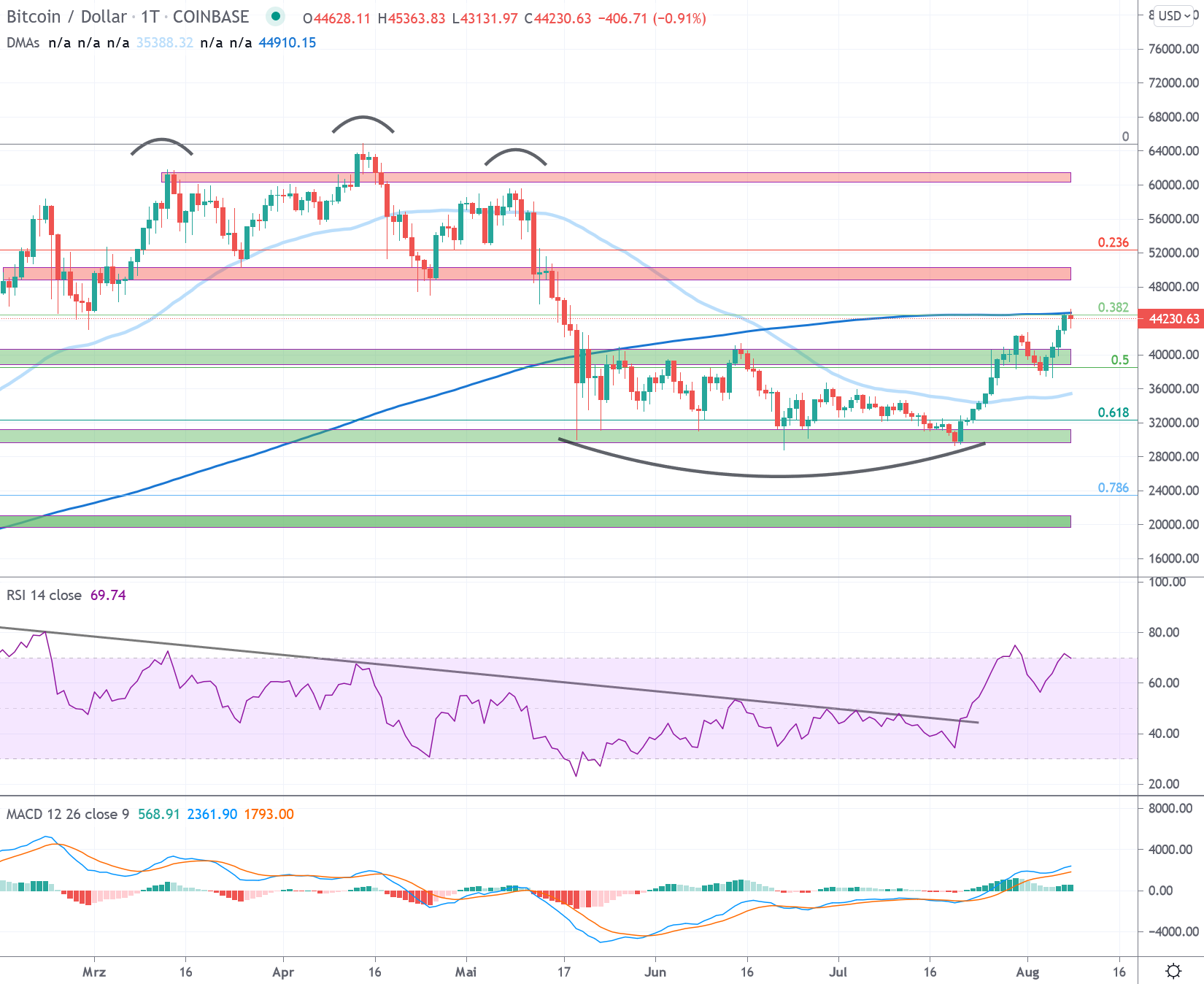 Since the breakout caused by the important 14,000 resistance at the beginning of November, things have happened in quick succession. With the breakthrough through the old all-time high at USD 20,000, the upward trend was strongly accentuated, which caused the Bitcoin price to mark its new all-time high just below USD 65,000 on April 14th. The rapid upward movement has so far been characterized by 3 corrections, each of which found its lowest point around the 50-day average (light blue line). The fourth correction, however, led significantly below this for the first time and so there was also a breach of the trend line, which has served as a support since the beginning of the year, shaped by the respective daily lows. In the past few weeks, this has resulted in an accelerated downtrend, which has led to important support areas. As a result, the price consolidated in the corridor of USD 30,000 – 40,000.

For the first time, we are above the price corridor of USD 30,000 – 40,000 that has persisted for 11 weeks. A “round bottom scenario” in the area of ​​the 0.618 Fibonacci point, which is calculated between the start of the rapid upward trend and the new all-time high, has manifested itself in a strong upward movement.

The impressive countermovement that followed the last failed attempt to break through the USD 30,000 support zone certainly came and shapes the current positive market environment. Within 9 trading days, the upward movement reached the USD 42,000 resistance zone. The subsequent correction found its low at USD 37,000 and led the price back to the 200-day average at USD 43,792 at the end of the week.

The price events in the reporting week, including the “retest” of the USD 37,000 zone, confirm the positive environment that has been strengthened again. At the moment the 200 day average is used as resistance. As long as the onset of price declines do not lead back to the zones below USD 42,000, the next test of the 50,000 resistance zone is likely.

Approaches to a healthy consolidation 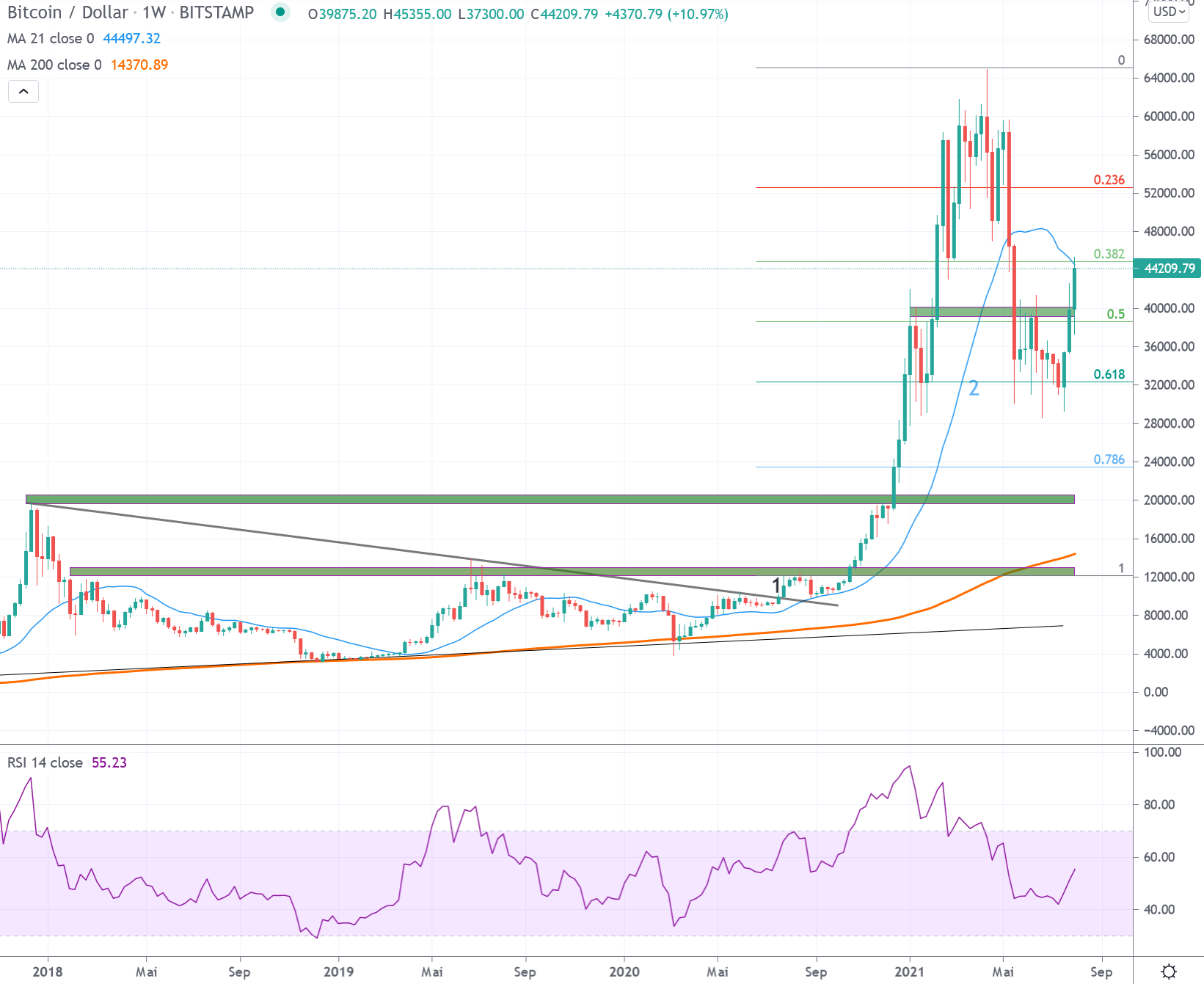 Since this first overcoming of the bearish trend, the signs of a valid trend reversal have intensified. With the breakthrough through important resistance zones and a continuous development above the 21 week average (2), the chances of reaching the all-time high set in 2017/18 increased noticeably. This was done in mid-December 2020. This was followed by a strongly accentuated price finding above this historical level, which in mid-April produced a new all-time high of USD 65,000. A consolidation initiated since then ended in a veritable price slide that brought Bitcoin back to the USD 30,000 mark in just two weeks.

With the price movements in the past year, a good foundation was created to sustainably climb new spheres beyond the all-time highs reached in 2017. The break of the USD 20,000 mark impressively demonstrated the strength of the upward movement that has been establishing itself since October. The rapid rise in the price was now suddenly interrupted with a fall, which brought Bitcoin even below the 21-week average (2) that had been reliable bull or bear market phases in the past.

It remains to be seen how sustainable the current correction phase will be. In the past, Bitcoin had equally experienced setbacks of> 50% in bull phases. The price has consolidated in the interesting 0.618 Fibonacci zone since the start of the bull market. The upward movement of the past week reduced or even negated the risk of a shoulder-head-shoulder formation. Sustainable price activity above the 40,000 support zone and regaining the 21-week average over the near future is necessary for a sustained positive picture. A “make it or break it” situation can be expected from USD 52,000. Here the market decides whether a renewed attack on the all-time high should take place or whether the countermovement towards the all-time high ends in a “bull trap” like in January 2018.