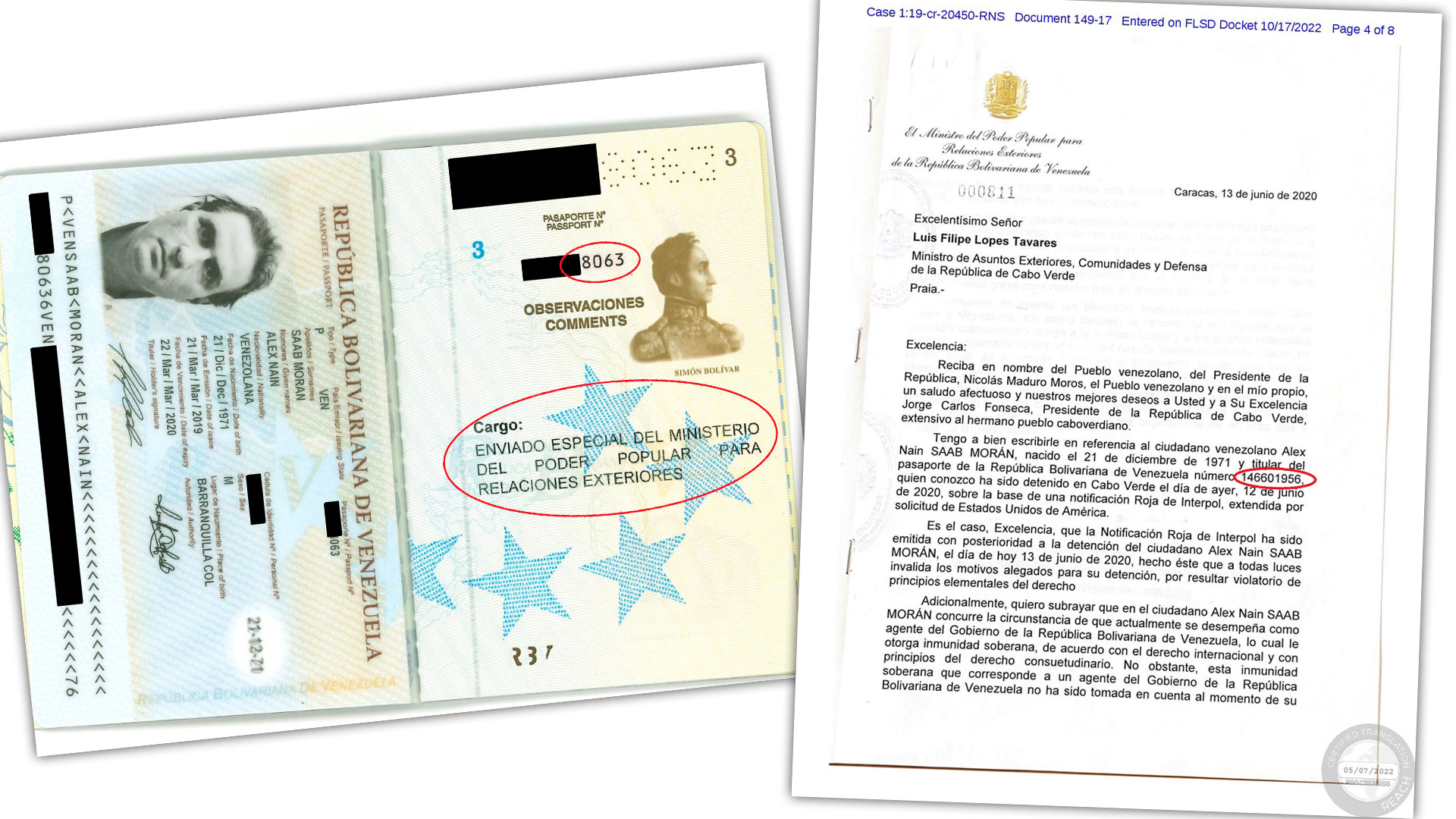 The lawyers of alex saabthe figurehead of the Venezuelan dictator Nicholas Maduro who is imprisoned in the US, committed a unusual mistake in the last hours. Seeking to add arguments in his favor, they exhibited the supposed diplomatic passport that the businessman had at the time of his arrest. However, when contrasting this document with the claim made by the Chavista dictatorship to Cape Verde, it appears that their numbers do not coincide: the one shown by his lawyers ends in 8063, while the one recorded by Foreign Minister Jorge Arreaza is 146601956.

“Alex Saab’s alleged ‘special envoy’ passport appears in a new motion to dismiss. But there is a problem: the Venezuelan foreign minister does not mention him in a letter protesting his arrest in Cape Verde. Quote another passport, with a different number”, said the journalist from AP Joshua Goodman on his Twitter account, while sharing the images that prove his claim.

For his part, the communicator Roberto Deniz He echoed his colleague’s publication and stated, also on the social network: “Alex Saab’s lawyers just got a strike. On the one hand, they show the alleged diplomatic passport that Saab had at the time of his arrest, but the number does not coincide with the one Jorge Arreaza referred to in his claim to Cape Verde one day after Saab’s capture”.

Alex Saab’s lawyers just got a strike. On the one hand, they show the supposed diplomatic passport that Saab had at the time of his arrest, but the number does not coincide with the one Jorge Arreaza referred to in his claim to Cape Verde one day after Saab’s capture https:// t.co/oyUj4YKNaO

Businessman alex saabconsidered the figurehead of the dictator of Venezuela, Nicholas Maduro, He served a year in prison last Sunday in the United States without a date for the start of his trial for money laundering.

The start of the trial of this businessman of Lebanese origin born in Colombia and nationalized Venezuelan for conspiracy to launder money was initially scheduled for last Tuesday, October 11, but was postponed without a date. 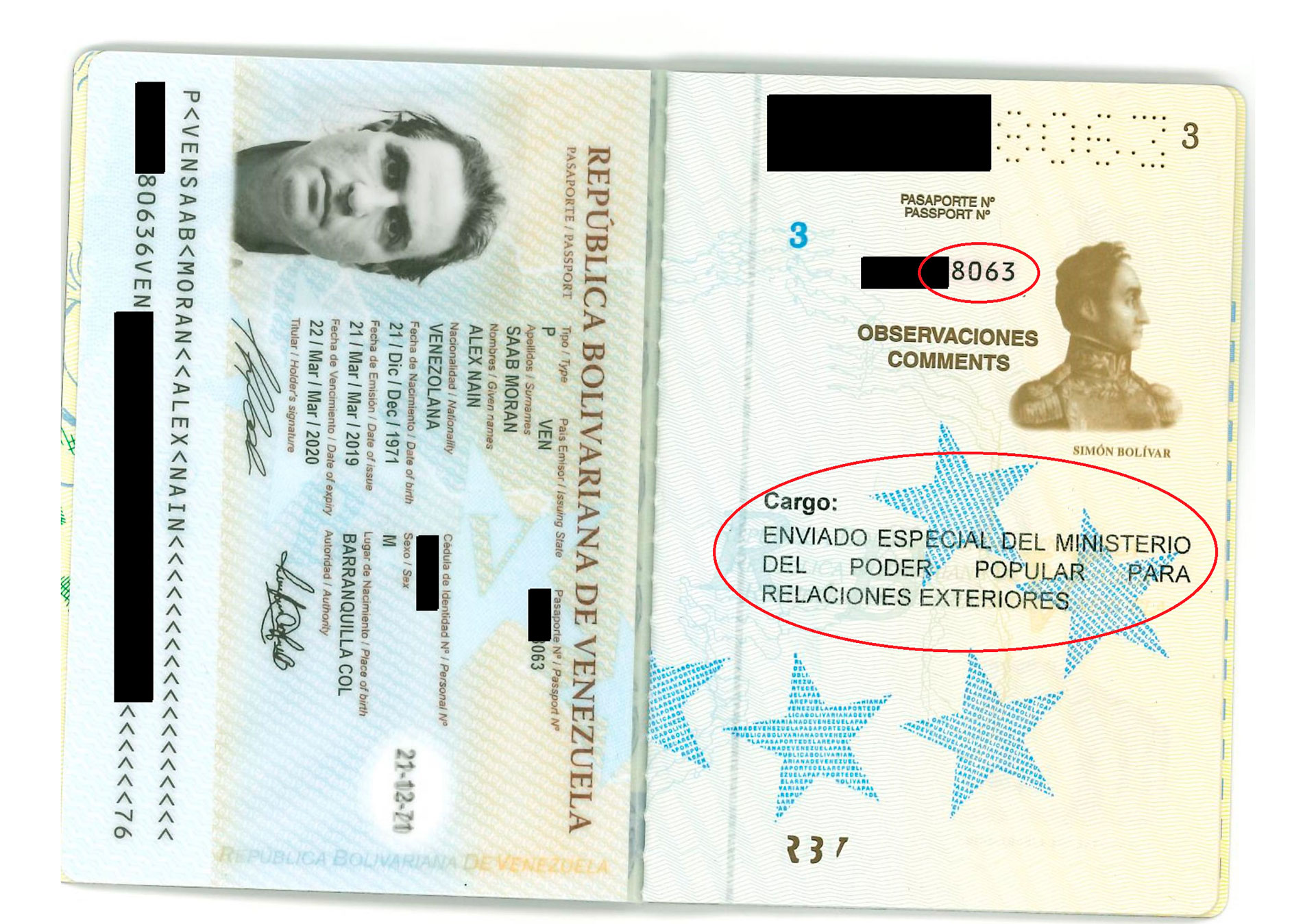 The passport number shown by Saab’s lawyers is 8063

Until now the process against Saab is focused on elucidating whether, as the defense alleges, he held a position in Venezuela with diplomatic immunitywhich, if accepted by the court headed by Judge Robert N. Scola, could free him from trial.

Last May, a US appeals court rejected an appeal on the grounds of immunity filed by Saab and referred the case to the trial court in Miami.

Saab, 50, was extradited to the US on October 16, 2021 from Cape Verde, a former Portuguese colony in West Africa where he was arrested in 2020 as a result of a international arrest warrant requested by the American justice.

According to the indictment, between 2011 and at least 2015, Saab and his partner Álvaro Pulido, who is at large, conspired with others to launder the proceeds of a bribery-based corruption ring. aimed at obtaining contracts to carry out public projects and fraud to the foreign exchange control system in Venezuela. 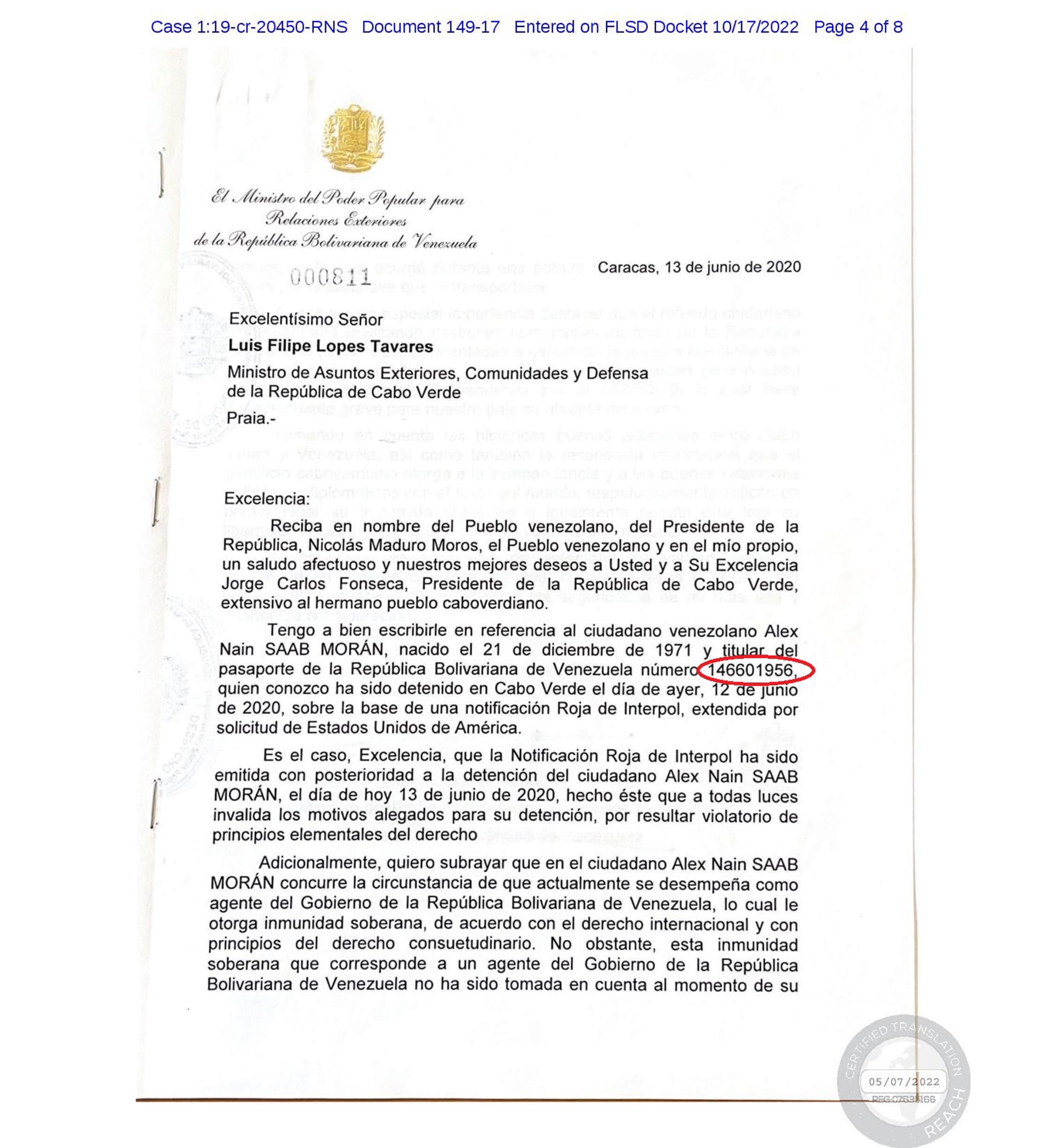 The passport number that Arreaza recorded is 146601956

Saab and Pulido are accused of transferring from Venezuela, through the US, approximately $350 million to accounts they owned or controlled in other countries, according to the Prosecutor’s Office.

The businessman pleaded “not guilty” in November 2021 and faces a sentence of about 20 years.

On February 28, Maduro said in a virtual intervention before the United Nations Human Rights Council that the Saab trial in the US “is riddled with serious vices and aberrant distortions.”

The “kidnapping” of Saab was the reason that the Venezuelan regime gave for suspending in October last year the dialogue it was holding in Mexico with the opposition.

Who is Alex Saab, the keychain seller who became the figurehead of Nicolás Maduro and ended up extradited to the US
The Maduro dictatorship ordered the arrest of Roberto Deniz, the journalist persecuted for his investigations into Alex Saab
The Chinese regime defended Alex Saab, Maduro’s figurehead 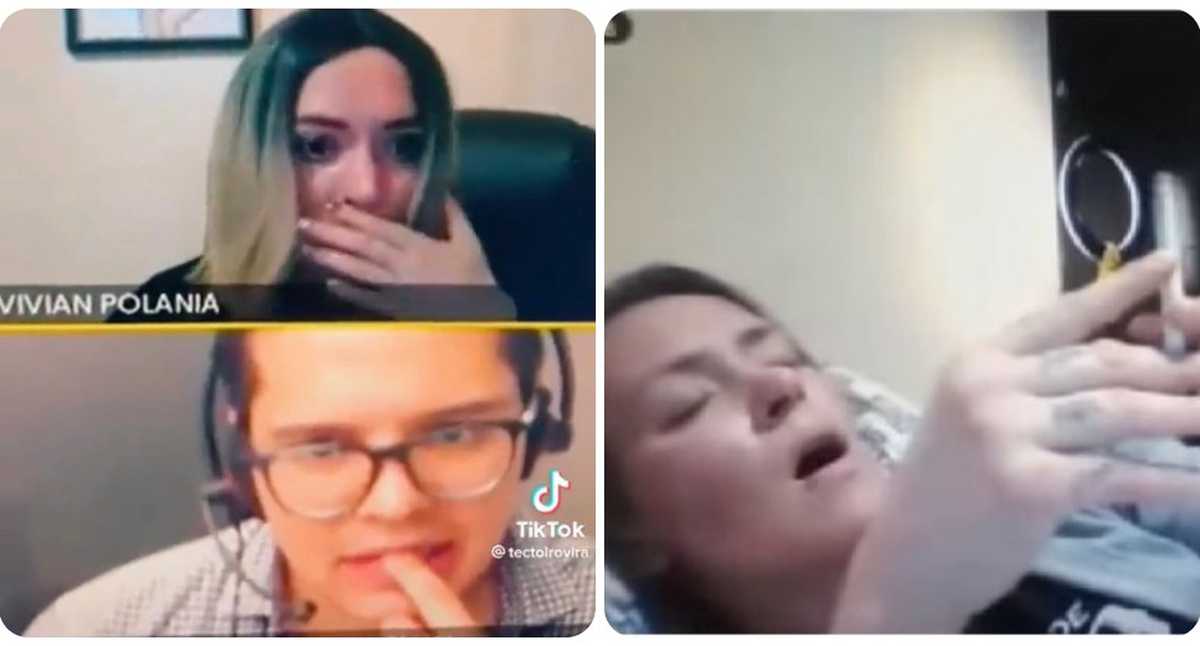 the slip of the judge who wore naked in a hearing

They evacuate the makeshift camp in Ciudad Juárez where Venezuelan migrants had been waiting for more than a month to cross into the US. 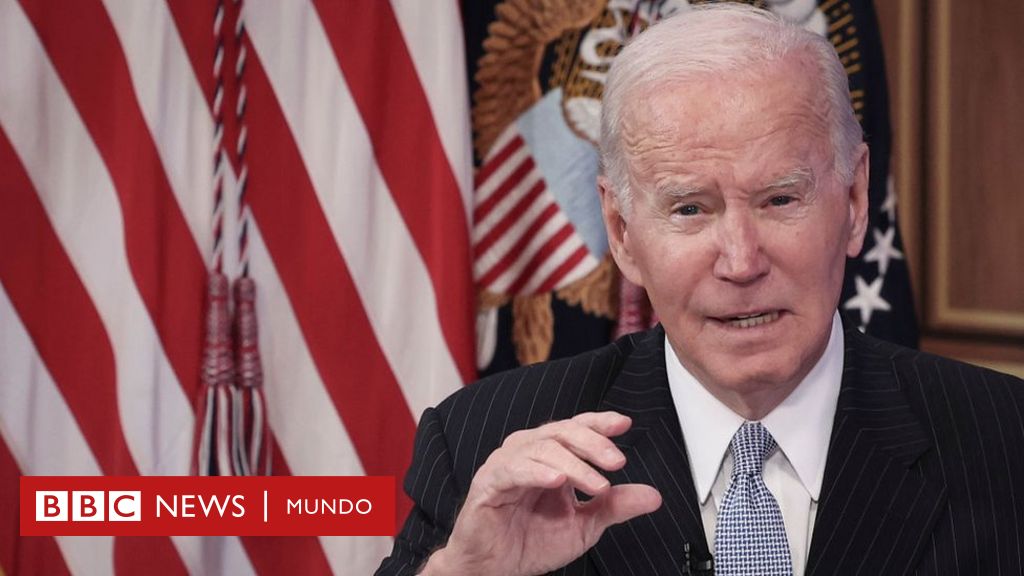 An impeachment against Biden and 3 other things that can happen now that the Republicans control part of the US Congress. 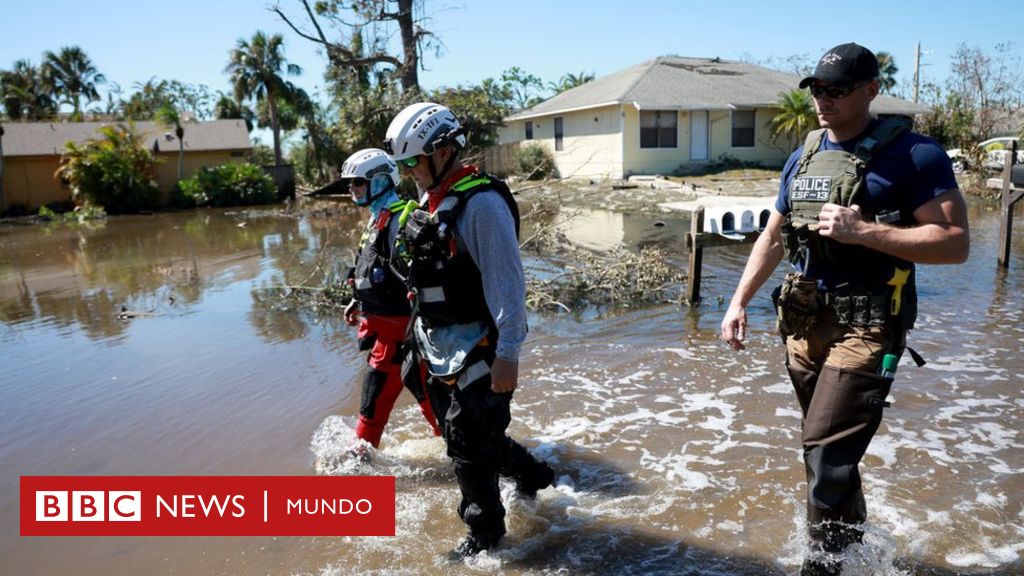