The 2022 Silverstone Grand Prix is ​​perhaps the best race Sergio Pérez has provided in his 12-season career in Formula 1, because the second place achieved by the Red Bull driver was a mixture of hands, guts and precision. An instant classic.

Checo Pérez has had epic performances since he arrived in 2011: Malaysia in 2012, where he came close to beating Fernando Alonso, his first win of 2020 at Sakhir, even the most recent at Monaco, but there are elements that could put Silverstone slightly higher.

The way in which Checo Pérez carved out the return was brutaleach place recovered from the 17th place in which he fell, after contact with Leclerc in the second start, was with pace and patience, 34 laps on medium tires at 110 per cent capacity, and the end, what an end! .. that will be worth some oil paintings, which we will soon see for sale in racing art galleries.

Sakhir was equally epic, even sentimentally ecstatic for being the first opera by a virtuoso who had never owned an instrument with a masterpiece. He also came from behind and prevailed in the modest Racing Point, with one pass after another to take the lead and with an icing on the cake provided by the misfortune of George Russell in the Mercedes that suffered providential punctures. Yes, a poem for fans of the Mexican, but…

Silverstone was the work of a world-class driver, a true driver at the top of his game and above those who are called the most talented. Today, as it has been for a long time, Checo Pérez not only claimed a place on the podium, but in the elite of the elite, something that some European rankings and critical acres spare him with foundations as solid as cards holding up a building.

The difference between Silverstone and Sakhir is that Checo Pérez gained the step in the winner’s circle millimeter by millimeter with chilling maneuvers, but full of sportsmanship over Charles Lecler and Lewis Hamilton.

Everyone needs a little hand from Goddess Fortune, and if Carlos Sainz does not say so, who won despite having missed several opportunities, Checo Pérez’s came on lap 39 when he was trying to open enough space to enter the pits without losing. fourth place with Lando Norris and Fernando Alonso. That’s where “San Esteban Ocon” came out, who with his abandonment caused the entry of the Safety Car and gave the Mexican a “free” stop in the pits and was able to stay in P4 and also with the possibility of a restart launched behind the three leaders.

And so it was that, on lap 42, Perez-Hamilton-Leclerc they caused a collective apnea in Silverstone and in each place where the race was seen on television. It was a fierce battle: Checo attacked Charles Leclerc, who with hard tires made a driving show to contain him. The fight was still going on between the Red Bull number 11 and the Ferrari 16, when Lewis Hamilton blew up the stands by passing them both.

Checo Pérez responded immediately inside Hamilton and they went tire by tire, until on lap 46, finally, the man from Guadalajara reminded the seven-time world champion that he can never be calm with him aside, because he gives him a fight and can win, just remember everything that happened in 2021. 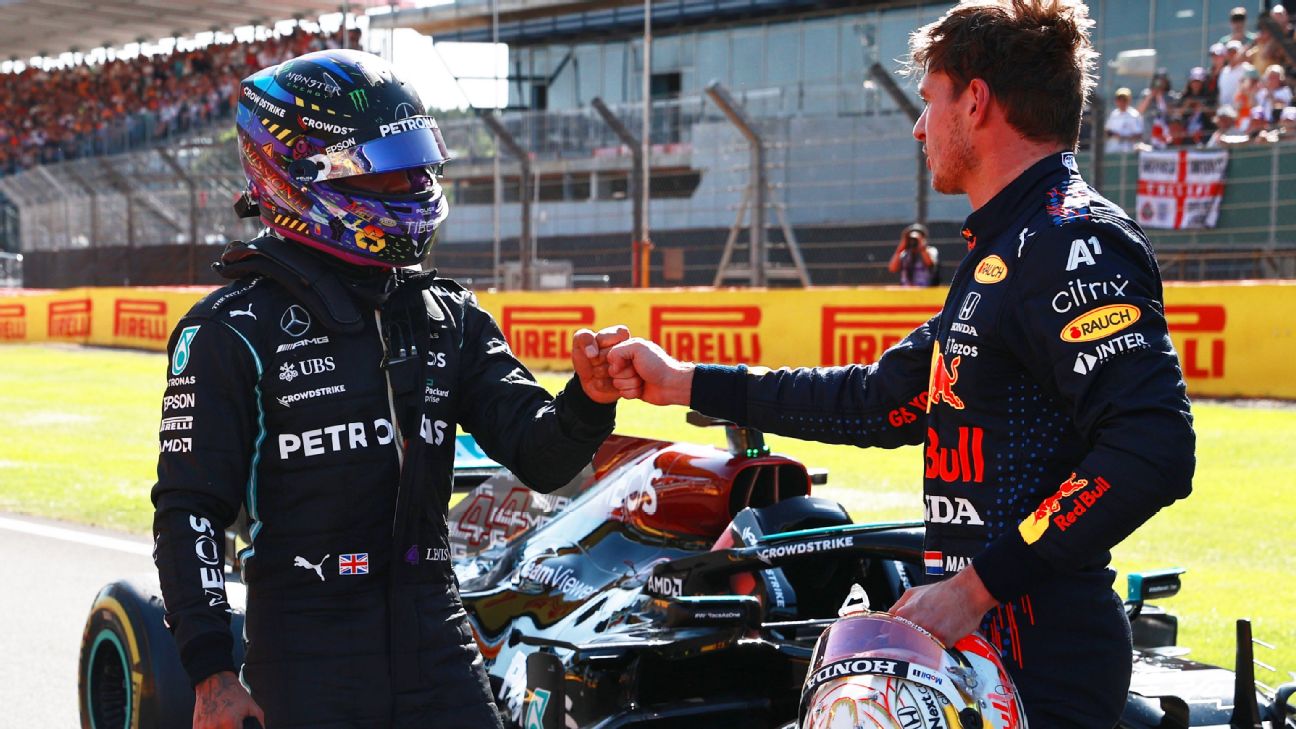 The 2021 Formula 1 season is decided at the Abu Dhabi Grand Prix, the weekend of December 10-12 live on ESPN Deportes/ESPN+, where you can also watch the practice and qualifying sessions.

They were minutes where what was done by that trio of great drivers made the world of F1 hold their breath, jump nervously and pull their hair. That level of competition and getting ahead of it is what could take away the “maybe” to qualify Silverstone as the best driving piece that Checo Pérez has delivered in Formula 1 so far, and despite not having been a victory, as craft and DNA sample remains forever.

On Youtube it is easy to find an epic duel, old-fashioned, without DRS, bare hands between the Ferrari of Gilles Villeneuve and the René Arnoux’s Renault at the Dijon Grand Prix, France in 1979. Few traces of F1 on video cause more admiration and show the talent of two classics and it is not a fight for first place, that race was won by the other Renault by Jean-Pierre Jabouillebut no one remembers him.

All proportions saved, the maneuvers of Silverstone 2022 will remain in the collective unconscious of Formula 1 and will receive clicks ad infinitum on all platforms, because that moment is already an instant classic, a blink of danger, handling, sportsmanship and quality. A moment that in the end was won by the Mexican Checo Pérez in Red Bull and that allowed him to continue as second in the championship in a Grand Prix where everything seemed lost.