The machine gun American M60 It is known worldwide for its film appearances, where used by a single soldier from the shoulder or the hip, it spit fire endlessly, an image far removed from reality.

Immortalized countless times in movies about the war of Vietnam or in the hands of Sylvester Stallone characterized as Rambo, the M60 machine gun was adopted by United States Army in 1957. 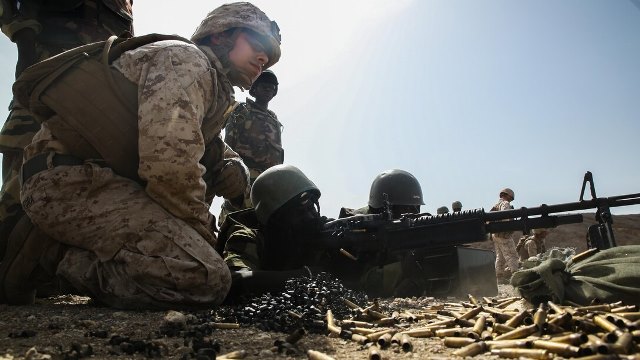 US Marines train Senegalese soldiers with the M60 in 2017 (USMC)

The M60 is a gas-operated general-purpose machine gun, fed by 100-round belts held together by disintegrating links, chambered in the 7.62x51mm, which fires with the breech open and is usually operated by two people they distribute ammunition and spare cannons.

It entered service in 1959 and was rapidly deployed among units deployed in Vietnamwhere he quickly gained the support of “the Pig” (the sow) due to its weight of more than 10 kilos and the speed with which it swallowed the ammunition (rate of 550 shots per minute).

Among its features was the barrel change system (an aspect always forgotten in the cinema) since sequences of 200 rapid shots overheated it and made it necessary to replace it using asbestos gloves to avoid burns since it did not have a handle. It had a folding bipod welded directly to the barrel, although it was also mounted on tripods and mounts for vehicles, helicopters and boats, a use with which it has remained until today.

Its weight, limited reliability, and the need to replace the barrel relatively quickly led to its decline in popularity, despite the 1970s introduction of the version. M60E3.

In the 1980s it began to be replaced by the M249 (Squad Automatic Weapon or SAW, a machine gun chambered in the lighter 5.56x45mm caliber. designed by the Belgian FNH. However its greater firepower and range (up to 1,100 meters) kept the M60 mounted on vehicles in service.

The Marine infantry it was given another chance and the aforementioned lighter M60E3 variant was adopted, with a front pistol grip to improve grip and with the bipod attached to the receiver instead of the barrel, among other improvements.

The navy seals they continued to trust it, and in the 1990s the manufacturer Saco Defense developed another variant from the E3 with greater reliability, shorter barrel and redesign of the operating system and adopted as Mk43 Mod 0 and marketed as M60E4.

However, its luck as a squad weapon was cast and in 1994 the US Army launched a replacement program in which it competed with the M240 (US name of the GPMG, also of the Belgian FNH), which finally ended it. substituting, above all for its greater reliability, remaining in service in reserve units and on vehicles as well as in the Navy Seals.

M60E6 in its current configuration (author)

The current version marketed by U.S. Ordance is the M60E6with a weight of 9.3 kg., a rate of fire of 500 shots per minute that allows better control and precision, a redesigned barrel change system that does not require the use of gloves, as well as multiple internal and barrel improvements. feeding system, which reduce failures and the usual Picatinny rails for the installation of vision elements and accessories.

In 2014 it was selected by the Danish Army and is offered as a conversion kit for previous versions, an option used, for example, by the Colombian Armed Forces. (Jose Maria Navarro Garcia)

Cover photo: Typical image of the M60 in Vietnam (US Army)

Copyright © Grupo Edefa SA Total or partial reproduction of this article is prohibited without prior permission and authorization from the publishing company.