Google has announced that in the coming months its own wallet will arrive in Mexico: Google Wallet, an option that will allow people Shop anywhere NFC payments are accepted.

The country will be part of the global launch for both Android and Wear OS and will initially have support for payment cards, loyalty cards, and will include other platforms latersuch as transit tickets, events, boarding passes, car keys and even digital IDs.

Google points out that this function is promoted by the need for people to use their smartphones to store credit cards, debit cards and make purchases, in addition to the digitization of other documentssuch as car keys, digital IDs and even vaccination records.

for now no specific date for its integration into Android or Wear OS, but it will be released in the coming months, as it will arrive “soon”, according to the company, in more than 40 countries.

The service was only announced at Google I/O 2022 in May of this year, turning the Google Pay app into a Wallet, thus offering a fairly complete option in terms of functions for compete directly with Apple Wallet. 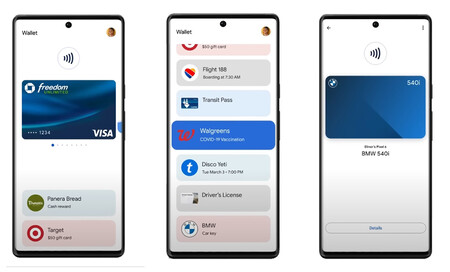 On this platform, a large number of documents can be stored on the device and add additional featuresas if there is a flight that we must go to, Wallet will notify about delays and door changes, and in concerts, alerts about tickets or even hotel keys.

Google points out that you can pay with Wallet in all those stores that accept Google Pay and have partnered with hundreds of stores, suppliers, agencies and airlines to create digital versions of cards or tickets from the app.