If we have to talk about a game that never goes out of style, this is, without a doubt, Minecraft. The Mojang sandbox still has millions of users from all over the world, counting, above all, on a particularly young audience. Therefore, Microsoft has had no choice but to find a way for players to have fun and be safe at the same time while playing online. And, although it has taken 11 years to arrive, finally the Microsoft title will have moderation functions and a new ban system. That’s how it works.

The new Minecraft update, 1.19.1, introduces a new moderation system through which specially trained Microsoft personnel will be in charge of monitoring user activity in public worlds and, if they detect any sign of bad behavior, they will expel players who violate them. The duration of the ban will be directly proportional to that of the violation of the terms, and may even be a final expulsion of the build sandbox. In the coming months, Microsoft will establish new expulsion rules, such as temporary bans for those who are not repeat offenders or commit minor infractions. 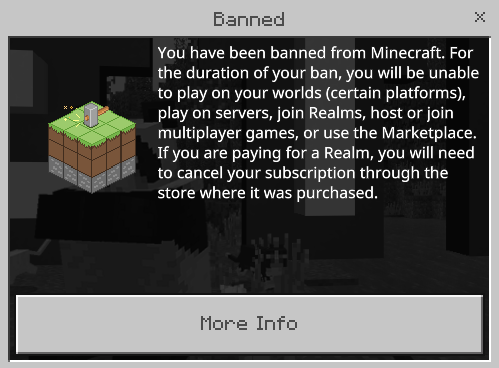 The moment a user is banned from the game, they will automatically stop being able to connect to the game servers, join Realms, host events, join any of them, and even get banned from the market. You will also not be able to access the worlds of Minecraft Earth and, in the case of Xbox, not even your own created worlds. In other words, once banned from Minecraft, the game will be almost unusable. Yes indeed, private worlds will not be moderated.

If we believe that we have been unfairly expelled, and we have not breached any normal, we can request a review at this link.

Reasons for expulsion, or ban, from Minecraft

In the end, the standards of behavior that Microsoft has established they are no different from any other online game. These rules are summarized in good civic behavior, being respectful of others. Among others, the main rules that Microsoft has imposed and that can lead to expulsion from the game are:

Of course, this new moderation system, with its corresponding sanctions, is a good thing. And we hope that it will come to more Microsoft games so that we can once and for all put an end to these cheaters who only harm the game.