Tall. Calm. Take a deep breath and finish reading the article, that only the condensed essence fits in the headline and whether it has caused you amusement, indifference or indignation, it has its reason. Not everything is black or white. In fact, I am intermittently using Ubuntu 22.04 LTS since its release and, With few exceptions, I think it’s a great launch: it looks great, it goes great… What more can you ask for? Several things, to tell the truth.

But I’m not here to go into everything you can ask for or not ask of Jammy Jellyfish. I didn’t even install it because I felt like it… or actually I did. However, the desire passes quickly due to the discomfort of using a desktop other than the usual one -I have everything I need well synchronized, but something is always missing- and what remains is the duty, which is also divided into several tasks.

Thus, while a few days of use would have been enough to satisfy my curiosity about Ubuntu 22.04 LTS, I keep it installed, first, to make myself a solid idea of ​​the status of what remains the number one Linux distribution on PC, At least for the moment; and derived from the above, because it helps me to update the tutorials that we publish after the release of a new LTS version of Ubuntu and that have been delayed due to the redesign of MuyLinux, among other reasons.

This, on the contrary, is an opinion post that you may not share, but that I had to get out yes or yes. And it is that the gelatinous jellyfish it brings many good things, but also some that I have not liked at all and of all the ones I have come across to date, the management of the software is by far the worst. And no, the story is not just about Snap, although it has a lot to do with it… by force, of course.

What’s more, I’m going to stop commenting in the following paragraphs, to simply recount what I consider to be the worst experience with software management of any other version of Ubuntu to date. At least that I remember. Someone correct me if I’m wrong about something.

As always, the process is quick and easy; and, as always, the first thing after logging in for the first time on the desktop, is to update the system. Using what? Opening the applications menu, there are two that should work: the typical “Updates” and the Ubuntu application store, that is, Ubuntu Software, that is, the Snap Store. But I better wait a bit to see what jumps first.

And what jumps first is… the old “Updates” wizard, ready to get the job done with just a click. It finishes the update and asks me to reboot. I reboot and when I go back to the desktop, I run the same wizard again to see if there is anything left lying around. And something remains. But once updated, it doesn’t ask me to reboot again. So I continue with my things. Specifically, I open the app store to install a few…

… And I find that the updates tab tells me that, yes, there are more updates waiting. Which? Those of the Snap packages: the one for Firefox, Ubuntu’s default web browser; but also that of the application store itself, the Snap Store, and the dependencies of both. I don’t know if if I had waited longer, UbuntuSoftware I would have run some notifications to let me know, because keeping the browser updated seems like a critical task to me. 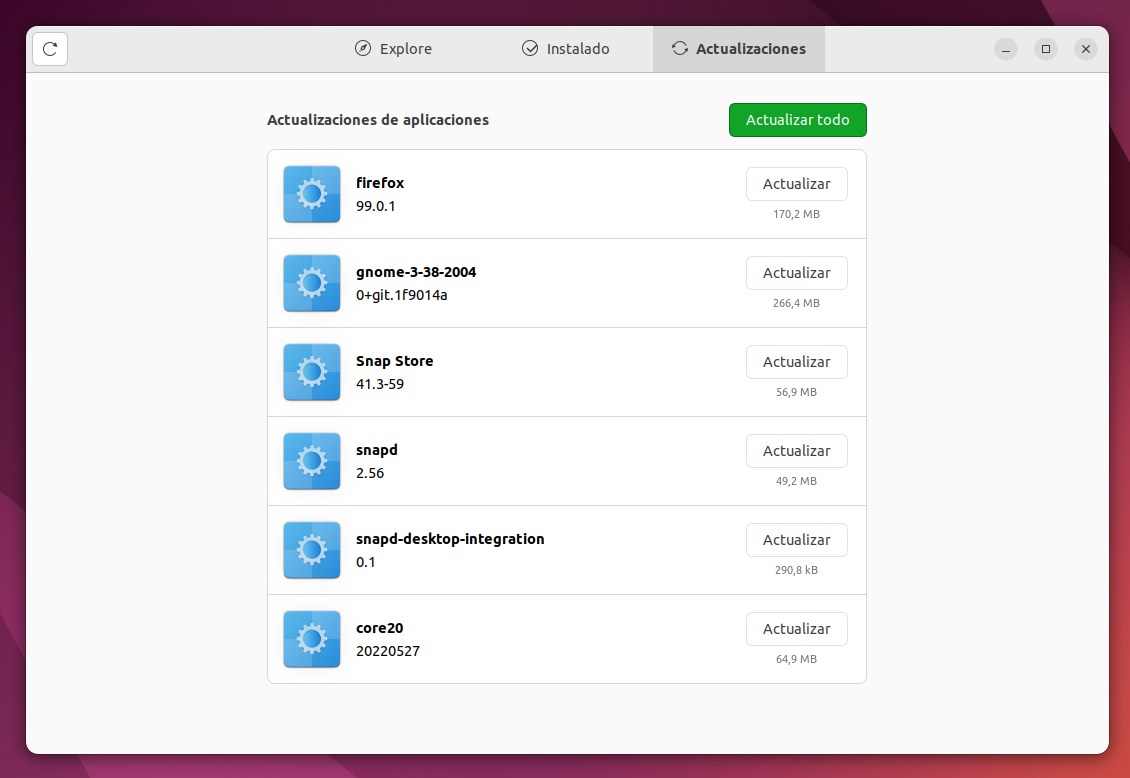 Ubuntu Software, that is, the Snap Store

In any case, it is a big botched thing that at this point I thought would already be solved: Two ways to update, essential, independent and incompatible with each other? Really? And this does the “Linux for human beings”? Really? Well, silly me, because writing these lines I remembered that something like this also happened with Ubuntu 20.04 LTS, but I’m not even referring to the same thing. 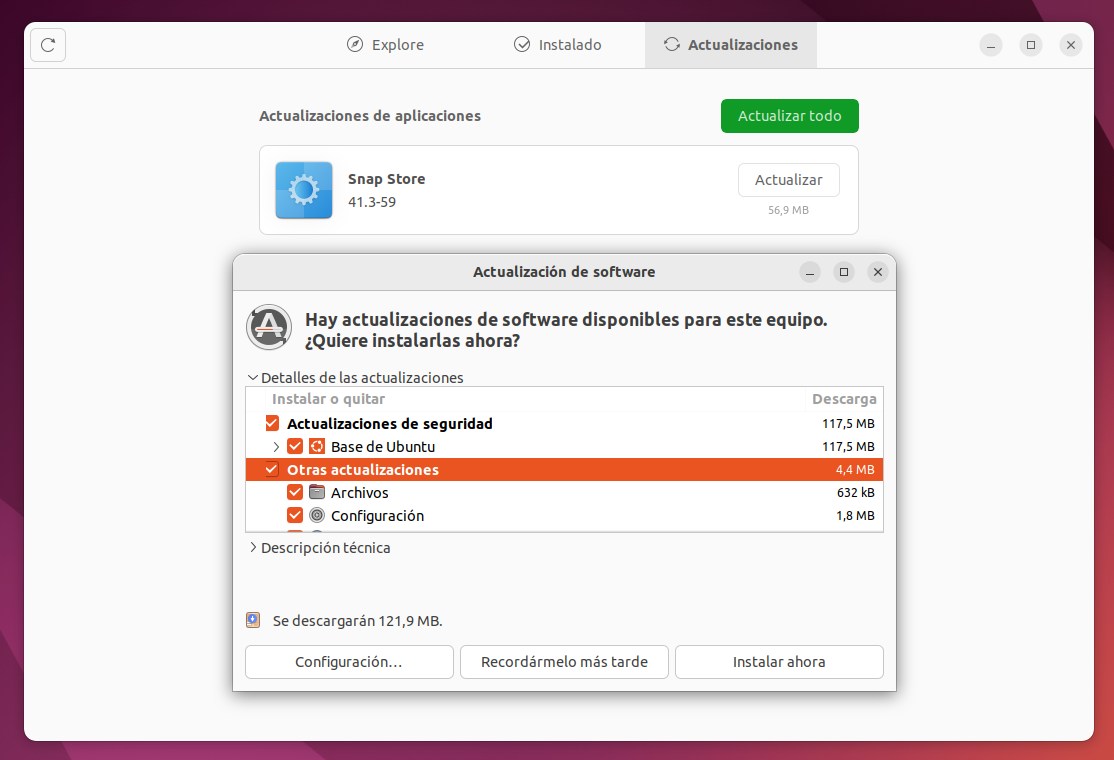 It just so happens -or maybe not- that, always in my opinion, Ubuntu Software was the great bungling of Ubuntu 20.04 LTS, an inconsistent imposition based on Canonical’s commitment to implement its software distribution service at any cost, be able to replace the previous option with the desired quality or not. And it is not. At least for the moment.

I was complaining in that other article about the lack of Flatpak support, or that Ubuntu Software prioritized Snap applications ahead of those available in the current system repositories. But is that inconsistencies are just as bad as those “behaviors”. Because, in fact, the same thing continues to happen: the priority in the packages offered is Snap and Flatpak is not there, nor is it expected.

While prioritizing its own packet format is understood without explanation, the same could be said about the absence of Flatpak, but no, the official position does not dare to go so far, that is, to deny its most direct competition. On the contrary, stupid arguments is the only answer we have obtained not only from Canonical, but from his very boss.

In fact, if we go further back in time, I remember that Ubuntu Software started its life as Snap without even offering support for installing applications in Deb format, although it fixed it quickly. 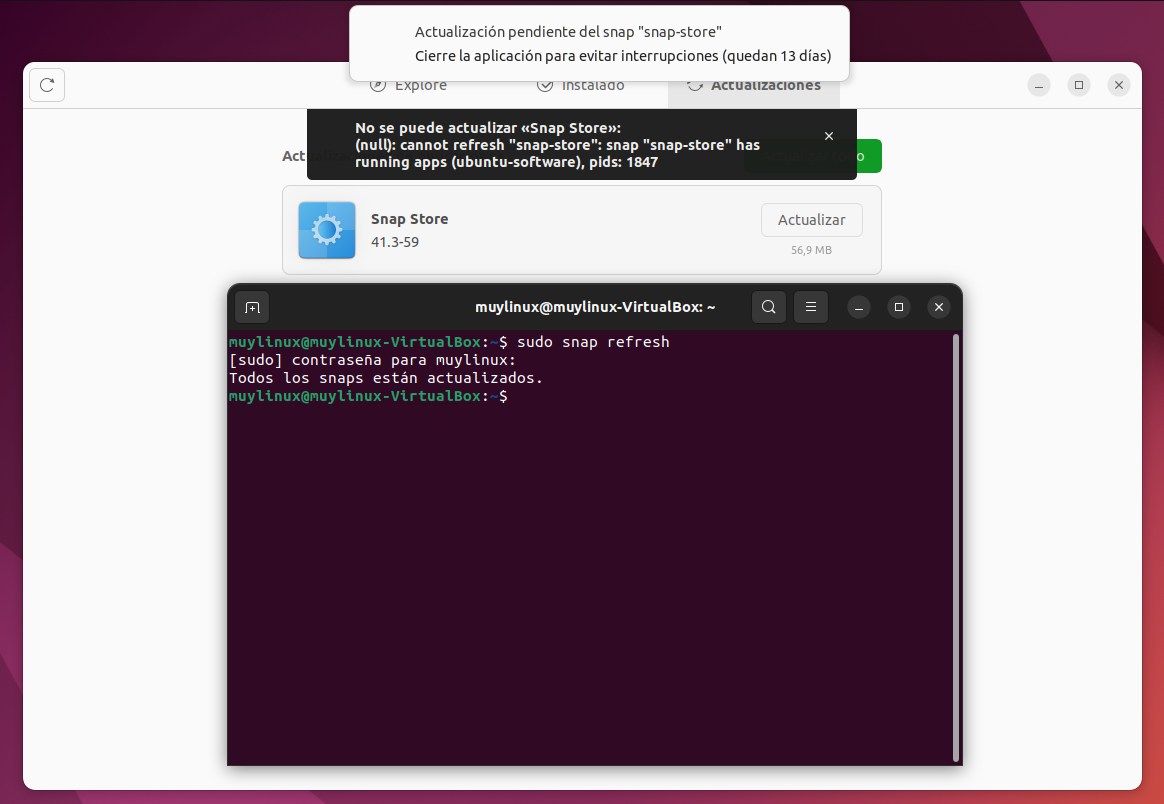 What has not been fixed in this time is the rest. So we can agree that aspects such as prioritizing Snap is reasonable or at least understandable and that my rejection of this procedure is mere opinion. But their refusal to implement Flatpak support is a clear disadvantage, because they are denying their users a rich source of software; and separating the updates into two clients is directly absurd, especially for the newcomer, one of Ubuntu’s target audiences.

In case anyone is wondering, I have nothing against Ubuntu or Snap per se, are all concrete criticism that seems nonsense to me. Many of you already know that my main system is KDE neon, which is based on Ubuntu LTS, and it works very well. In neon I use the current Ubuntu repositories, several PPAs, Snap, Flatpak… and I manage everything through Discover, updates included. It doesn’t matter how many updates appear and where they come from, because with one click I solve it.

Why can’t Ubuntu do the same? Because Canonical puts its interests before those of its users. It’s that simple. Because just as they package practically everything in GNOME, they could do it with GNOME Software, where it is possible to use all software sources in harmony… wait! They already do! Ubuntu Software is already included in the Ubuntu repositories, but they prefer to develop and pre-install Ubuntu Software because… I don’t know why, beyond the desire for control or relevance.

Who remembers the Snap messes beyond Ubuntu and how Canonical committed to keeping Snap support in GNOME Software? What did they do it for? So that users of other distributions could have easy access to the Snap Store, but deny theirs access to Flathub and other Flatpak sources? Then they will be surprised that they do not want to know anything about Snap, even if it is not only because of that, but because of its centralized model.

I return to the question I raised before: why does Ubuntu offer two ways to update, essential, independent and incompatible with each other? It’s just like that, eh?: the update assistant and Ubuntu software share the updates in Deb and Snap formats, respectively, both contain essential applications, which must be updated as soon as possible, and are incompatible with each other, because what they update one cannot be updated by the other.

Is this a botch or isn’t it? But the fact is that it is also a bad job of botching, when they could solve it by replacing that horror of Ubuntu Software with GNOME Software, which are absolutely the same, and kill two birds with one stone: the same interface to update everything, they put Snap by default and let Flatpak to be installed by users who know it. Everyone happy. But no, better that the user eats a poor experience.

From left to right: Ubuntu Software, GNOME Software, and the Update Assistant… damn me!

Finally, I repeat the question whose answer I haven’t had the patience to wait for: what happens if you only install the updates that appear in the common wizard? Does Ubuntu Software launch a notification or something at some point, if you don’t enter there is no tutorial? I mention it for what has already been mentioned, forgive the redundancy: whoever uses Firefox, will want to have it well updated. For safety, more than anything.

By the way, a clarification: I talk all the time about Ubuntu Software, although I also refer to it as the Snap Store. It’s the same, actually. To the user it appears as Ubuntu Software, but the package is called Snap Store, which is also what Snap’s global store is called. In case someone is confused.

To all this, one of the mandatory tutorials will be software management, seen what has been seen. The solution that I have liked the most is to remove Ubuntu Software and install GNOME Software, so I manage everything from there. However, it is not without its former, because although it integrates everything (Deb, Flatpak, Snap), its update process is… very heavy.

Be careful, because this can also be my opinion, nothing favorable with the offline updates or deferred updates. They are more secure, yes, but they are a total nuisance to me, as I told them when Discover adopted them. I was taking them off even before an option was added for it. However, there may be those who prefer them.

That said, that GNOME Software is similarly incapable of updating all updates in one go leaves me cold. Yes, you can update the ones that come in the form of Flatpak and Snap first, but then you have to hit it again for the rest (see the different blocks in the image above). Seriously?