Euthanasia is one year old. The question is one: how many euthanasias have been practiced since the entry into force of the law, on June 25, 2021? The answers are 17, and not all the autonomous communities have been willing to provide this information, before the Ministry of Health collects the data in a structured way.

Fifteen of the seventeen have responded to this newspaper. The result of the sum of the euthanasias practiced in this year of entry into force of the law is 174in the absence of data Asturias, La Rioja, Ceuta and Melilla. 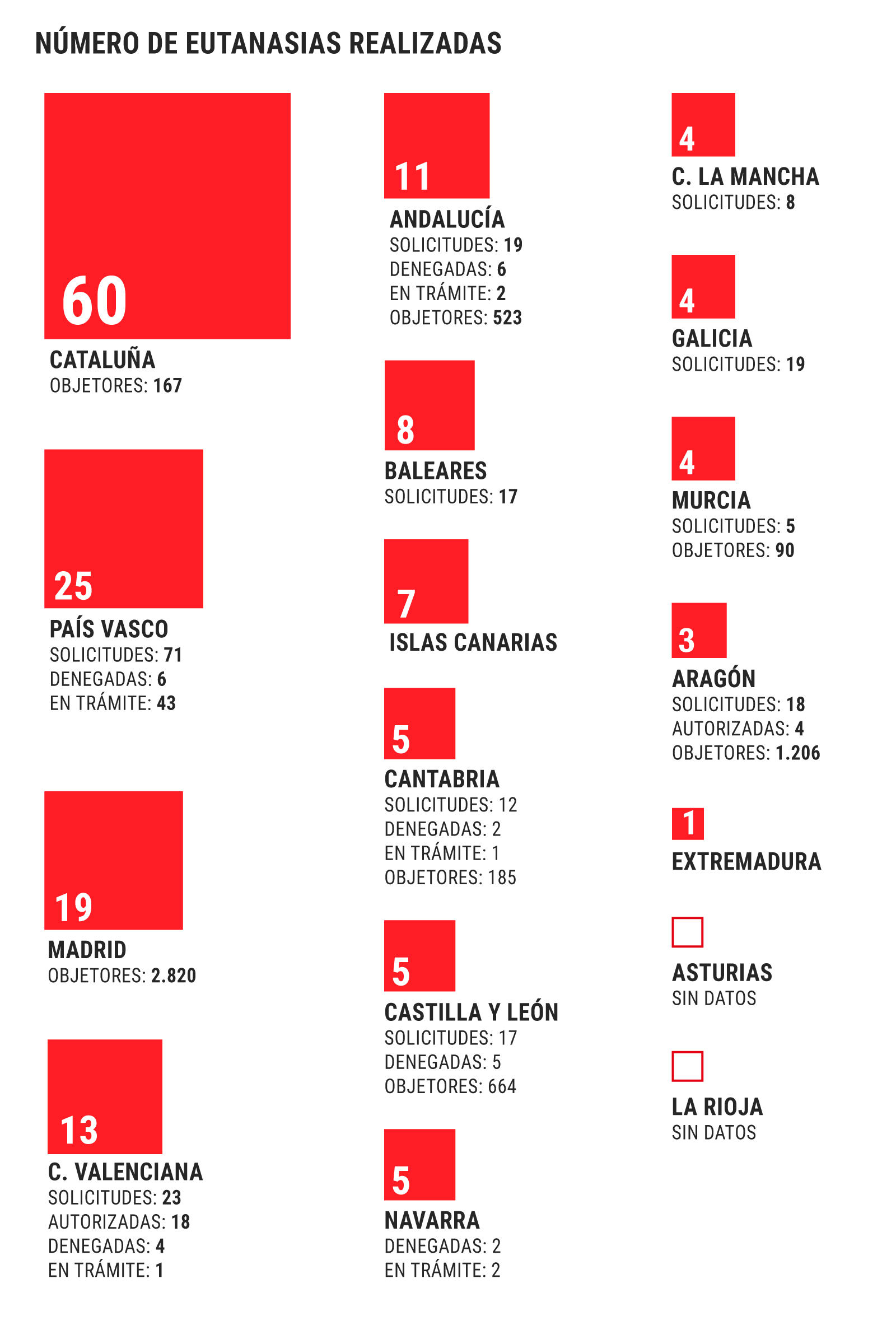 “Around a third of euthanasia requests are never carried out,” points out Javier Judezdoctor, vice president of the Association of Fundamental and Clinical Bioethics, and researcher of the laws that regulate euthanasia in other countries. The reason? “Some patients die before their request is resolved, others revoke it and some requests will be rejected because they do not meet the authorization requirements.”

The relationship between carried out and requested by autonomous communities is as follows: Cantabria received 12 requests for euthanasia, made 5, four people died before processing the request and two were denied. In Navarra there have been nine requests, of which five have been carried out, two have been denied and two are in process. Aragon has received 18 applicationsthey have approved four, but have only carried out three. In Galicia the relationship is 19 requests and four euthanasias performed. In Castile-La Mancha four of the eight requested have been executed. Murcia has received five requests for euthanasia and has carried out four.

The Valencian Community details that they have received 23 requests, distributed between the province of Valencia (14) and Alicante (9), of which 18 have been authorized and four have been rejected. Catalonia it has carried out 60 euthanasias out of 137 requests received, 78 have been approved and 37 people have died during the processing of the request, nine of which already had approval; 5 have been revoked, and four denied. Basque Country It has received 71 requests, of which 25 cases have concluded with the execution of euthanasia, while 22 people have died with the procedure initiated and six requests have been rejected.

Balearics received 17 requests, they have formalized 13 of which 9 are from Mallorca; 1, from Menorca, and 3, from Ibiza and Formentera. He has performed eight euthanasias, of the 10 requests with a favorable resolution. While, Castile and Leon received 17 requests, has made 5 and has rejected 5, while they have one request in process.

Júdez also warns about the provisional nature of these figures, as they correspond to a first year “with a system that has started from scratch and, therefore, with very little implementation time. It is very likely that there are different speeds of demand-response between autonomous communities. It is a stage of filming, start-up, trial and error…”.

In addition, he warns that it will be necessary to be attentive to the “monitoring table” of the information on euthanasia that comes out of the Ministry of Health: “Tell me what you measure and I will tell you what you value”.

But, as far as we know, “the disparity between communities in the application of the law is enormous”, as recognized by José Francisco Díaz, national coordinator of the Bioethics Group of the Spanish Society of Primary Care Physicians (Semergen). “There are some communities that have tried to quickly develop all the infrastructure required by the Law – guarantee and evaluation commission, registration of objectors, training for health professionals, etc. – and others that are going much slower. In the first case, has tried to provide support to professionals, facilitating contact with responsible doctors and with medical consultants, thus making the work of primary care doctors easier”, points out the doctor.

Catalonia and Basque Country These are the communities that have offered more detailed information about the benefit. Together they add up to 85 euthanasias carried out, more than half of the total, and in their data they coincide that most of the euthanasias have been carried out in the home of the person requesting it: in the case of the Basque Country they have been 17 of 25 and , in Catalonia, 33 out of 60.

For this year’s qualitative assessment they have given their vision Maria Jesus del Yerro Alvarez and Jesus Olivera Pueyopresidents of the Euthanasia Guarantee and Evaluation committees of Madrid, on the one hand, and of Aragon, on the other, with a privileged responsibility to respond, for example, to what have been the problems/doubts/lack of knowledge of the health workers who have responded to these requests for assistance.

Del Yerro Alvarez answer this question with a long list of points. To begin with, “there are doubts about the fulfillment and knowledge of the different documents that are requested and that must be sent to the Guarantee and Evaluation Commission. They are also not clear whether, by declaring themselves an objector, they are obliged or not to collect the patient’s application or which is it the request to appoint a responsible doctor. Or what to do in cases of incompetent patients, that it is the legal representatives who make the request; how to request medication to help in dying if the responsible doctor is a primary care physician; how the consulting physician is sought and appointed or the sequence of actions provided for in the law”.

from Aragon, Olivera Pueyo summarizes: “The biggest doubts and problems have arisen when channeling the requests of the people who have taken advantage of this benefit. The LORE was launched, but adequate training for health professionals was lacking. Many professionals were unaware of the Law. It is necessary to continue with continuous training on the LORE, and on the accompaniment at the end of life in general”.

The LORE establishes very clear response times in each phase of the process. However, in this first year, in some cases there have been difficulties in adjusting to what has been set.

Del Yerro Álvarez acknowledges that “it has not always been possible to meet the established deadlines, delaying the appointment of the responsible doctor after the patient’s request, in the event of conscientious objection. Other frequently missed deadline is the communication to the Guarantee and Evaluation Commission, which takes more than 24 hours, after the favorable report of the medical consultant”.

On the other hand, the person in charge of Madrid points out that “not all documents are attached or there are errors/omissions in its completion, which delays the opening of the file until the documentation is complete”. Although it clarifies that in the case of the Guarantee and Evaluation Commission of Madrid “in all cases, the the established deadlines”.

His counterpart in Aragon, Olivera Pueyo, admits that “initially there was some difficulty Furthermore, since the necessary dynamism was not available for the fluid operation of all the steps of the Law, especially when the people who requested it suffered from advanced terminal illnesses, some of them died waiting for the benefit to be applied”.

Remember that “the LORE establishes between 35 and 40 days to respond to each request. The response time for acceptance or denial in the General Commission of Guarantees and Evaluation (CGE) is only 7 calendar days. This period is adjusted so that a pair of a doctor and a lawyer can prepare a report. In addition, if the duo does not reach an agreement, a meeting of the entire CGE is necessary to make a joint decision and all this must be done in a time less than a week“.