He told Extra: “It was a lot of kismet and a lot of connections, but that’s where we met.” After months of speculation, Chris Pratt and Katherine they became official on Instagram in December 2018 and got engaged in January 2019.

Before popping the question, Pratt decided to go the traditional route of asking Schwarzenegger’s father for her hand in marriage.

Of course her father is the action movie star Arnold Schwarzenegger. Arnold has a close relationship with Pratt, with Katherine recently posting a photo of them smoking cigars together for Father’s Day. She captioned the photo, “My boys! Happy Father’s Day to my wonderful/fun-filled dad Opa, and my amazing and loving husband. I’m so thankful. We’re all so lucky to have you both!”

Katherine and Pratt have welcomed two daughters so far: Lyla Marie in 2020 and Eloise Christina in 2022. Following Eloise’s arrival, the couple posted a joint statement on Instagram, writing, “We are so excited to announce the birth of our second daughter… We feel beyond blessed and grateful.” The happy parents kept things private for the first month, but now they’re finally ready to share Eloise with the world…with a trick. 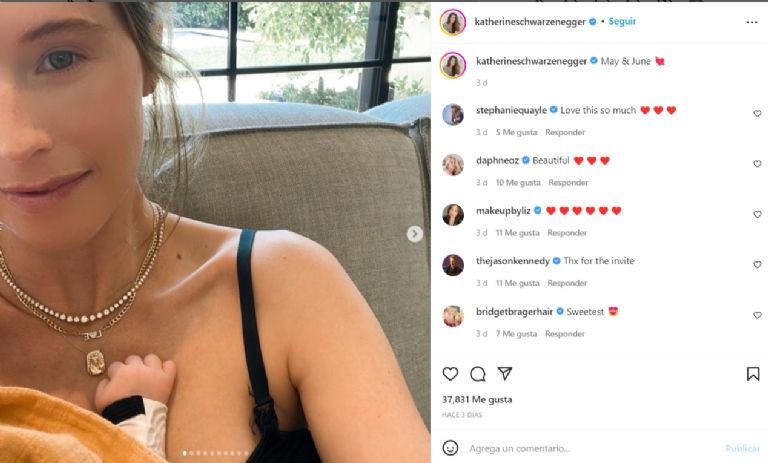 On Sunday, June 19, Katherine Schwarzenegger posted a photo of her life since welcoming Eloise Christina. Along with some snapshots at home and a photo of Chris Pratt from behind, two of her photos show glimpses of Eloise: one of her hand and one of her legs. There is also a photo of the hand of her oldest daughter, Lyla.

Schwarzenegger has previously spoken about keeping his kids off social media, telling TODAY’s Hoda Kotb in 2021, “I think one of the greatest gifts my parents gave me and my siblings is the gift of privacy and having a really normal upbringing, or as normal an upbringing as possible”.

As the couple has probably said many times in church, Amen! As mom vloggers and family YouTube channels often go too far in sharing their children’s privacy, Schwarzenegger and Pratt’s attitude about kids on social media is more than refreshing.