The first season of The Kardashians, reality-series produced by Hulu and distributed in Italy by Disney +, and I’ve been inconsolable ever since. I started what I thought was the natural continuation of Keeping Up with the Kardashians convinced it would have been the usual, very pleasant, brain-clearing, and instead we just lacked that I had to follow the various episodes equipped with pen and paper to keep in mind the life lessons that the K clan gave me every time. In an era populated by “important series”, “essential books”, “courageous films”, I am here to argue that there is nothing more right, fun and intelligent to interpret the spirit of the time than observing and listening to the “three sisters (plus two half-sisters, plus a matriarch) who have made a pact ”(cit.). Clearly this statement risks appearing a bit thrown out if not supported by plausible facts and arguments, so here is an excerpt, a compendium – unfortunately partial – of the teachings of Kim, Khloé, Kourtney, Kris, Kendall and Kylie: yes, only of the them, because if there is one thing that we have now understood is that in there men do not really matter a shit.

Taking off your jacket is for peasants

I have always hated hangers, jackets thrown on the bed, hangers, and I think the Kardashians think like me: the jacket must always be worn, whether you are in the car, in your mother’s villa, in the restaurant to scofanarti a cheese and pepper (or rather, a “cacìpepi “, but we’ll come back later), in a recording studio. In summer as in winter, in autumn as in spring, whether it’s a trench coat or a down jacket, taking it off indoors is a rude and dated gesture – with all due respect to the armpit.

“We don’t need to baby people“ 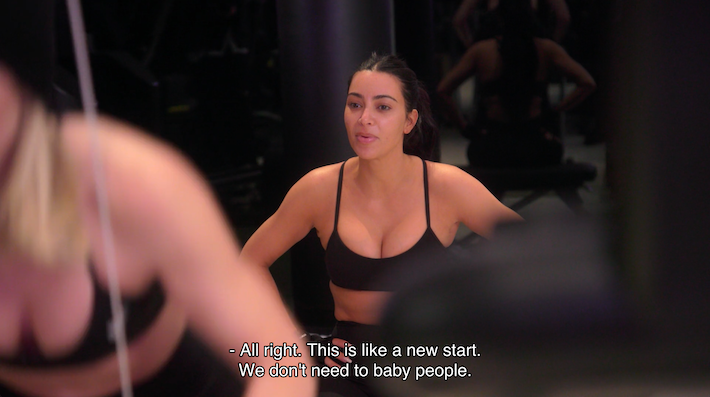 This sentence was a real epiphany, but what am I saying, a new moral rule. Between a series of abs and a series of squats (this time without a jacket, although Khloé does not give up a cap), the sisters come to a single conclusion: men should not be treated like children. Indeed, not only men: people in general. We are vaccinated adults (hopefully) and we need to stop babysitting: whoever has ears to hear, you mean you; as for the others, bye bye.

The incontrovertible need to be multitasking

Time is short, the hours are numbered and there are so many things to do: you have to take an example from Kim, who – while consoling a potential death sentence on the phone – takes the opportunity to get a semi-permanent nail polish. They both cry, especially her, but at least the Shellac dries up in the meantime.

Like Kourtney and Travis Barker: almost ninety years in two and kilometers of tongue thrown in the mouth in any place or situation, alone or in company, without any shame. He cheers very hard lemons, always, in any case and at any age.

Don’t be afraid to test yourself

On the sixth time that Kris Jenner tried to say “cacio e pepe”, punctually mistaking pronunciation and accents, I thought “Oh well Kris, put your heart in peace, it doesn’t matter.” But she continued, undeterred, so satisfied with her “cacìpepi“: The times have become at least fifteen, and the matriarch-momager he never gave signs of surrender.

The real friends are seen at the moment of the infusion

Did you think that Kendall-health-freak-Jenner on vacation with best friend Hailey Bieber in Miami was all about beach, party, drinks on the sunbed, shopping and swimming in the ocean? No: the two of them shut up in the hotel to shoot each other with healthy infusions of vitamin C, because «wuesta yes that is true friendship». Side note: obviously I checked the feasibility of the thing in Italy, and for now there seems to be only one guy in Latina who offers a similar experience. Anyone wishing to launch into this business, know that he can count on my total moral and economic support.

We all need encouragement

If life itself requires recklessness, let alone go shopping at the supermarket: every time I bring the cart back to its place, I hear Kris Jenner’s voice giving me strength, “You are doing amazing, sweetie!Exactly as he instilled courage in a Kylie unprepared to face the dangers of everyday proletarian life. I would like to sample it, the voice of Kris Jenner, and put it as a ringtone, because even answering the phone of these times is a heroic act.

As banal as it is sacrosanct: there are few examples of real and sincere family support like that among the members of the Kardashian clan. Everyone is there for each other, regardless of skirmishes, quarrels and discontent: we advise each other, we support each other, there is no room for jealousies (Kim who “steals” the cover of Vogue America to Kendall, with Kendall commenting “I’m really happy for her”), grudges, long faces. An applause to Kendall, who after arguing with that worm Scott Disick and letting some time pass, is keen to clarify the situation: “Because you are still part of our family and I care about you.” Well, good, encore.

The importance of a good vaginal bath

You know what one is yoni steam? No? Bad. Kourtney docet: there is nothing more lustful than letting an infusion of «roses and stuff»To get rid of toxins. ‘A steaming vagina? It’s a bit disgusting to hear it », Khloé comments separately: the world is divided, you decide which side to take.

Which in Italian sounds a bit like “Fuck me once and it’s your fault, screw me twice and it’s my fault”: to tell the truth, the times Khloé was screwed by basketball player Tristan Thompson are no longer counted, but anyway . Getting stubborn in wanting to make the relationship work with a man unable to keep the pea in his pants is the fastest road to hell, and after yet another betrayal / scandal, Khloé decides (hopefully) that’s enough, it’s over. Although she is devastated, our heroine also does the beau geste to pack his stuff in a box: a cathartic gesture indicative of moral superiority, a little thing that cannot be learned overnight and that abounds in the family. ChapeauKhloé.