The American star becomes one of the testimonials of the vegetable meat brand: but who will be convinced? 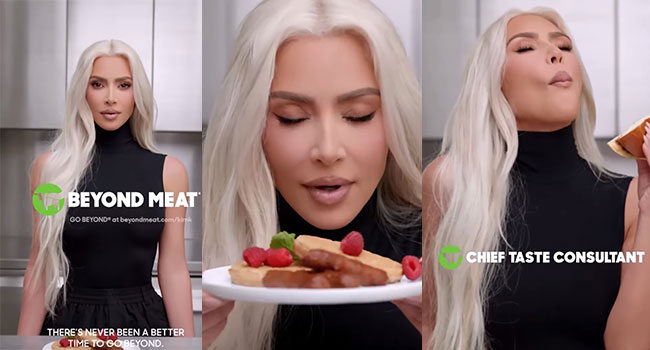 “Chief consultant for taste tests”: this could translate the new “assignment” that the TV and social media star Kim Kardashian has accepted from the American company Beyond Meat, which produces plant foods that mimic meat.
The entrepreneur appeared in a video posted on the company’s Instagram channels and on her own. Kim Kardashian, as of this writing – has 314 million followers.

The reactions of the public

“I believe so much in Beyond’s mission – says Kardashian in the video – that I decided to contribute my greatest skill: taste”. The model, long platinum hair and black tank top, appears while some chefs present Beyond Meat dishes to her in silver plates, in particular burgers, nuggets and vegetable sausages. “This plant-based meat is not only incredibly delicious – explains Kardashian in the video – but it’s better for you and for the planet. It’s a small change that can make a big difference. Now that I am the official taster there is no better time to go further ”.

The video has totaled, at the time of writing, May 26, 2022 – more than 1 million views and a huge amount of comments. Some of them, however, have highlighted a couple of aspects. The first: the model seems to taste absolutely nothing. The bun she is holding in the first part of the clip is not bitten, there are no images showing Kim Kardashian putting any of the products in her mouth and – according to some – the images would clearly show that the model is pretending to chew.
The second point that emerges from the comments is Beyond’s choice of Kardashian as a testimonial: she is not vegan, some write, and above all she is not known for having particular culinary skills or skills in this field. Instead, major US vegan magazines such as Live Kindly or Plant Based News enthusiastically commented on the video.

It is clear that the choice of the Beyond Meat brand is to show its product and convey its message to the disproportionate number of people who follow the American VIP of Armenian origins. Even Kardashian’s choice of words leaves no doubt, there is talk of “small changes to one’s habits”: the point is to make as many people eat less meat as possible, showing that this gesture is also performed by very famous people. The “veracity” of the tasting (for the lack of which there could be reasons related to the contract that the model has stipulated and in which there could be clauses even of an aesthetic nature related to her image or safety) is not the point as well as not his expertise in culinary matters is. The fact is: how many people will be persuaded to try “meat without meat” from the video of one of the most famous people in the world (famous for being famous)?