Few movies have waited as long to hit screens as “Top Gun: Maverick”. The film that became one of the biggest blockbusters of that decade in 1986, could have had a sequel immediately, but its protagonist, Tom Cruiseundertook other projects before meditating on the idea of ​​bringing back to life a character that became iconic in his career.

It was in 2010 that the news of a sequel reached the American newspapers, but in 2012 a tragic event sent the entire project to zero: Tony Scott, the director of the film, passed away. It took 5 more years for Tom Cruise to make the project official with a new director and a new cast, which in 2018 added Jon Hamm, an actor with experience in action movies, but remembered mainly for the role of the narcissistic and manipulative Don Draper from “Mad Men”.

For Jon Hamm to be part of the sequel to “Top Gun” is a fact difficult to believe, because like many teenagers in the 80’s he was a fan of the film. But, in addition, for everything lived on the set thanks to an unusual filming experience led by Tom Cruise. The actor told us like this:

WATCH THE INTERVIEW WITH JON HAMM ON VIDEO: 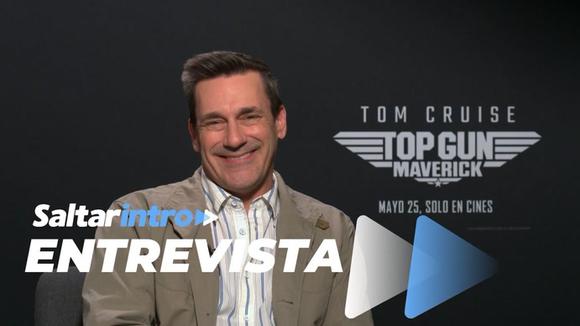 LOOK: Tom Cruise: meet some of the exclusive cars that adorn his garage

—You were a teenager when the first “Top Gun” movie was released, what was your relationship with this iconic film in those years?

I saw the movie in the summer of 1986, when I was 15 years old. I remember that all my friends wanted to see her, we saw her over and over again, we talked about her and repeated her phrases. Basically, we wanted to be in that movie, because it was so cool. That’s just what movies and their stars were at that time, and they still are: people look at movie stars and see the stories because they’re somehow aspirational. I didn’t want to be a fighter pilot after Top Gun, but I did like to imagine it. That time has passed, and thirty-odd years later, I am part of the sequel to that story and work with some of the same characters, it is a tremendous honor for me, it is something that I still cannot believe is happening to me.

—Currently it is very common to use CGI and technology to recreate scenarios, but in “Top Gun: Maverick” you were on a real aircraft carrier, around real helicopters and ships and all these military elements that look so good in the movie. How was the experience of filming in such spaces?

As amazing as it looks in the movie, it was really cool, because you don’t see that kind of stuff anymore. I think we’ve gotten to the point where we don’t see stories of real people in this style. If they do, usually those people are wearing a cape or throwing a hammer at someone. “Top Gun: Maverick” is like looking back, but I think it also reminds people of how great it can still be to make Hollywood movies.

Tom is a wonderful guy. I know him more off screen than I do on screen and he is a generous person and a generous actor. He loves his job, he loves making movies, he’s tremendously enthusiastic and that enthusiasm is contagious, it’s a really nice energy to have around, because all Tom wants is for everyone to be great and you know he’ll work just as hard for it as you do and That’s great.

—You have already made films of this genre before, but what has been the most interesting thing about seeing the work on the set of an icon of action cinema like Tom Cruise?

Just seeing him lead the team. Tom is the first on set and the last to leave, he works harder than anyone and that work ethic carries over from top to bottom, from cast to crew and to everyone; everyone wants to do the best job they can because they know how important it is to this guy and no one wants to let down a leader like him.

What you should know about the premiere of Top Gun: Maverick in Peru