in January hbo max played with our feelings by announcing that ‘Fenomenoid’ would arrive on the platform at the beginning of the year, in the end that did not happen and after almost half a year, we already have the animated series produced by Steven Spielberg.

At the moment the series is in the catalog as ‘Freakazoid’ and we will only be able to see the first season with 13 episodes that include his original latin dubin addition to being able to select the voices in English with subtitles in Spanish.

The series was initially created by Bruce Timm, producer of ‘Batman: The Animated Series’, but was later taken up by Tom Ruegger with Steven Spielberg. ‘Freak’ was the Steven Spielberg’s third collaboration with Warner Bros. Animation after the successes with ‘Tiny Toons’ and ‘Animaniacs’.

Its premiered in the United States in September 1995 and was canceled during the middle of its second season on June 1, 1997. In total it only has 24 episodes of 22 minutes duration. 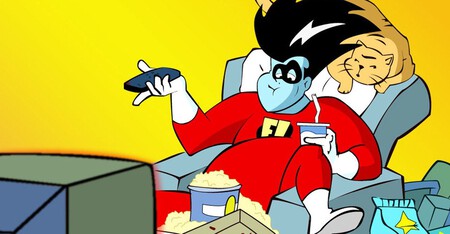 Unfortunately the series was a failure for Warner due to its low ratings in the United States. In the case of Mexico ‘Fenomenoid’ was broadcast on open television on Azteca 7 With a good response from the public and similar to ‘Don Gato’, it became one of those beloved series that failed with the neighbor to the north.

‘Fenomenoid’ was not without controversy, in 2003 Mike Alfred, creator of the ‘Madman’ comic revealed that Bruce Timm mentioned to him that his character was an inspiration to create the seriesmentions that he was “flattered” at the time, but when the product came out he never received any recognition, credit or compensation.