Dinosaurs were the stuff of museums and specialists until, in 1993, Steven Spielberg showed that it was possible to bring them back to the face of the earth, at least on screen. The filmmaker who had already molded the mythical “shark” a few decades earlier, adapted a science fiction and adventure novel by Michael Crichton and generated a “dinomania” on a planetary scale. It had several effects: it spawned a blockbuster as big as a Tyrannosaurus rex, it raised the bar for the “monster” subgenre in film, and it started a franchise that would run for decades with no intention of going extinct. Rather the complete opposite.

The plot of the first installment of “Jurassic Park” – which gave Spielberg millionaire revenues the same year that “Schindler’s List” gave him several awards – is very simple. It does not differ too much, in its main tensions, from movies about catastrophes or cataclysms. A millionaire manages to clone Jurassic dinosaurs and create a theme park on an island with them. When he makes the first tour, as a test, the security systems fail and the antediluvian animals take over the territory.

That common thread takes the viewer on an unparalleled journey, where the reptiles take almost all the limelight. Except, perhaps, for the megalomaniac John Hammond (played by the Englishman Richard Attenborough), the tycoon who, in his attempt to build the largest theme park in all of history, ends up generating a kind of cataclysm on a scale. At some point, he embodies the madness to which human ambition can lead.

The impossibility of competing with the lizards is perfectly understood by the other actors Sam Neill, Laura Dern and Jeff Goldblum, who just have fun in their respective roles. At some point, they are aware that the public wants to see the computer generated creatures. Reviewer Todd McCarthy of Variety sums it up aptly: “It may be one-dimensional and even clumsy in story and characterization, but it definitely succeeds in what it counts for: thrill, suspense, and a stupendous recreation of the gigantic reptiles.” 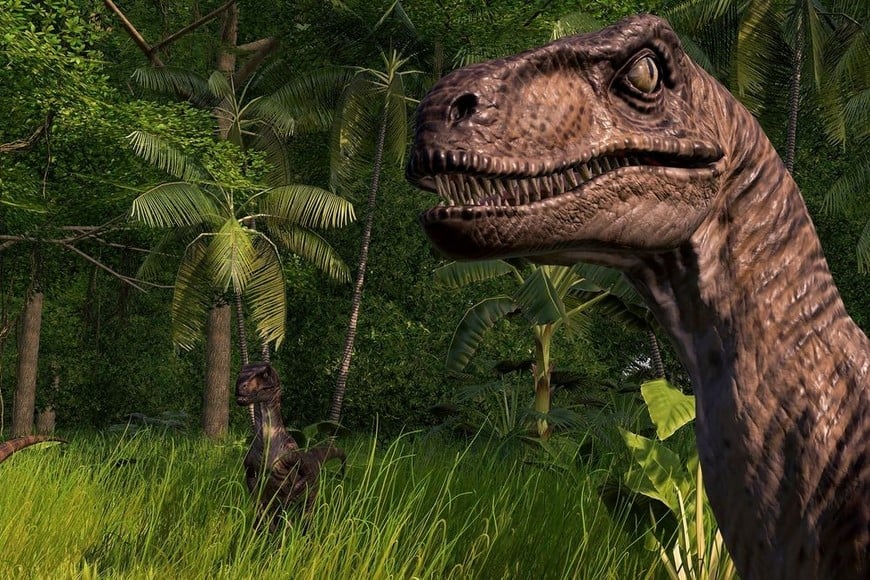 The almost one billion dollars that “Jurassic Park” obtained was an incontestable argument. The studios decided to give continuity to the story and thus created a franchise that managed to sustain itself over time. In 1997 “The Lost World: Jurassic Park” came to theaters, again with Spielberg behind the cameras. Although it entertains a lot (after all, it is about Spielberg) it lacks some of the inspiration that its predecessor possesses. The director flirts more than necessary with special effects and pays little attention to the plot, which detracts from it.

Joe Johnston (who had directed the solid “Jumanji” and “October Sky”) took over from Spielberg in 2001 to continue the franchise in “Jurassic Park III.” A film that leaves aside the reflective elements (Ian Malcolm’s character is not there with his phrases like “God creates the dinosaur, God destroys the dinosaur. God creates man, man destroys God. Man creates the dinosaur” ) and a sense of humor (“Mr. Hammond, I have decided not to endorse your park”) to put the whole axis into action. The search for a lost teenager on the island populated by dinosaurs barely serves as a link between irregular scenes. In spite of everything, the public responded in a massive way and the commerciality of the phenomenon was maintained. 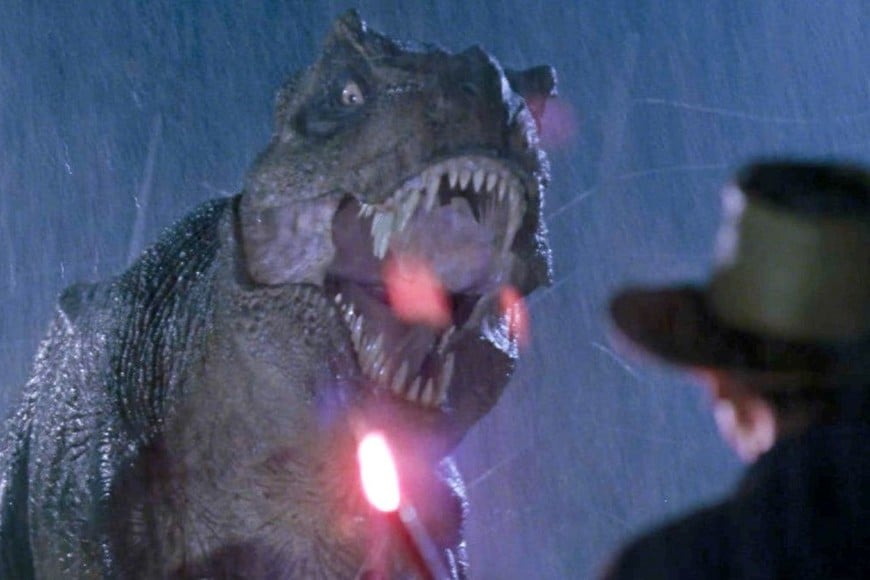 In 2015 Universal, Amblin and Legendary entrusted Colin Trevorrow (the creator of 2012’s ingenious “Safety Not Guaranteed”) with the Spielberian legacy of the great lizards to redirect the fate of the franchise.

“Jurassic World: Jurassic World” places the action two decades after the events of “Jurasin Park”. Now Isla Nublar was turned into that theme park that Hammond had somehow envisioned. But the “versions” of the antediluvian giants they use are conveniently “domesticated.” But, once again, ambition wins the fight and a genetically altered dinosaur manages to escape. Aware that the surprise effect of the origins no longer has a margin, Trevorrow bets on the show pure and simple.

Among the successes of this late revival of the saga is the incorporation of Chris Pratt and Bryce Dallas Howard, who manage to give their characters the energy that corresponds to the level of demand. Although they lack the scathing point of view that Ian Malcolm (Jeff Goldblum) and Alan Grant (Sam Neill) gave in the predecessors. As Variety critic Scott Foundas noted, “It captures only a small part of the wonder and awe of the original film.” 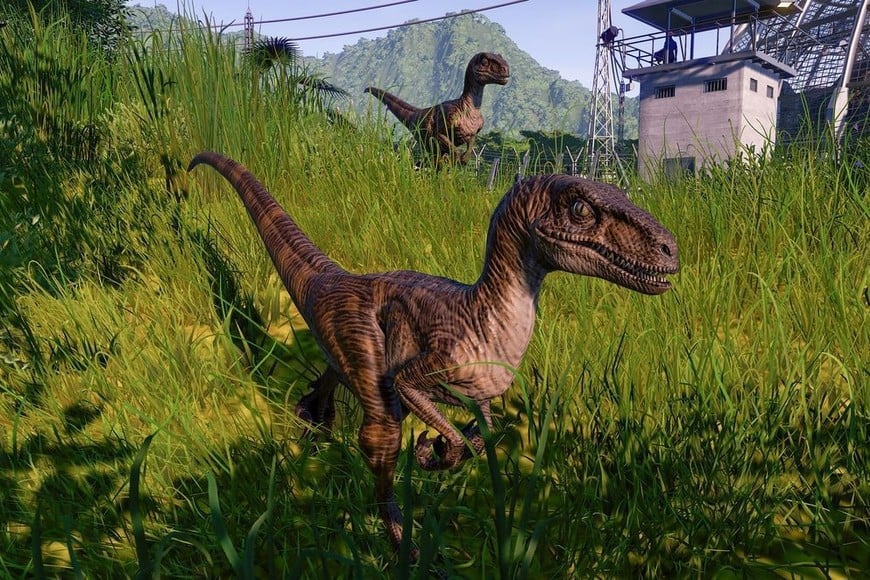 “Jurassic World: The Fallen Kingdom” was, in 2018, the film that allowed to continue the universe of dinosaurs. This time the Spaniard JA Bayona (creator of the terrifying ghost story “El orphanage” and “The Impossible”, where the horror is much more palpable in the form of a tsunami) has the responsibility of keeping the pulse of history. Now the theme park is gone and dinosaurs roam freely in its ruins. Interestingly, a Dinosaur Protection Group has emerged (something unthinkable in previous installments of the saga) that must act when a volcanic eruption threatens to extinguish life on the island.

Bayona does not seek to provide his film with innovations. He rather tries to go back to the source, Spielberg style to resolve the scenes and make the suspense work in the best way. He manages to combine the use of new visual techniques with the spirit of the monster movies of the ’50s (“Godzilla”, “Tarantula” and “Them!”). He goes where the public wants, without wasting time. Watching the film is, as critic David D’Arcy points out, riding a roller coaster. You know that you will find pure adrenaline and for that you put on your belt.

“Jurassic Park” was released in June 1993. When the 29th anniversary of that milestone in commercial cinema is completed, in June 2022, the launch of “Jurassic World: Dominion” will take place. Now, after the destruction of the island, dinosaurs live and hunt alongside humans all over the world. That complex balance will redefine the future of the earth and will force both species to show who has the capacity to dominate the planet.

Colin Trevorrow directs again and Chris Pratt and Bryce Dallas Howard act. There will be a nostalgic charge with the presence of Laura Dern, Jeff Goldblum and Sam Neill, who played the scientists Ellie, Grant and Malcolm who had to give their opinion on “Jurassic Park” in the first installment of 1993. An attempt to return? to the sources? The only sure thing is that the dinosaurs, 65 million years later, continue to dominate the world, at least the world of cinema.