Welcome fans of arnold schwarzenegger. After the articles on Jean-Claude Van Damme and his best films, Bruce Willis and Steven Seagal, it’s time to visit the ten best films by the Austrian actor.

Arnold Schwarzenegger with Sylvester Stallone They were the two actors who made me happy the most. Going to the cinema to see his films was an event. They were the superheroes of that time. Most of the time they played normal people in extraordinary situations, which gave the film greater epicity.

Without further delay, I am about to choose his ten best films, come with me and leave your opinion on the list in comments and make your own if you want.

There has been room to put the film that finally brought together the two action movie stars of the 80s. They had already coincided in the Mercenary saga but with a Schwarzenegger as a cameo. Here the two are protagonists. It is not even remotely one of the best films of both actors, but we finally see the two colossi together and that already adds up many points in their favor.

2013 film where the best of the film lies in the intact charisma of the two stars. Otherwise a distracting popcorn action movie. Stallone turned Escape Plan into a saga, but I don’t recommend watching it.

I love this movie, with Arnold in full swing of his success. However, it was still far from big budgets and the film in that sense feels poor in several aspects. The staging is also weak, more typical of the television medium of the time than of a science fiction movie. Arnold here is already beginning to win over the public with his cynicism and judgmental phrases.

Of course it will not go down in history but the charisma of the Austrian actor makes us remember this film and it goes into the top ten.

Perhaps my favorite buddy movie. Enormous rapport between Arnold Schwarzenegger and james belushi. A film directed by the great Walter Hill. I understand that for the new generations this film may seem simple and even bad, but for me it is a must-see.

Scenes like the one I leave you below are already the history of the Austrian giant’s cinema.

As the main anecdote, it should be noted that this American production was shot in the very Red Square in Moscow, which meant that the Cold War was becoming a thing of the past.

I have already talked about it on the web in the retroanalysis I did at the time. It is the film that catapulted the Austrian bodybuilder to stardom. It is not exactly a recognizable Conan if you are a fan of the comics but the intention is appreciated and the film entertains. And it has one of the best soundtracks in the history of cinema.

The Austrian’s work is commendable and praiseworthy for the professionalism he exudes, considering that he came from the world of bodybuilding.

Film unfairly reviled by critics and audiences. Although in recent years there are those who already speak of it as a cult film. It is not a term that I like to refer to this film, which I consider a little gem, directed by the great John McTiernan.

Be that as it may, it seems to me a great story of action and adventure with one of the best performances of Schwarzenegger. And it is that the evolution that Jack Slater suffers when jumping from the screen to the real world is very well worked by the actor.

There are many cameos and metacinema that enhance a proposal that was not understood at the time. Here we start with top notable high movies.

It is difficult for me to place this film so far from the podium, which I consider masterful. james cameron in its best version giving us the best James Bond movie. And again Schwarzenegger proving to be a great actor, wasting charisma.

Great your partner, a spectacular Jamie Lee Curtis that would even steal the show from the Austrian actor himself at certain points, giving us hilarious moments that culminate in this iconic scene.

“I’m not worth the cost of a bullet.”

I know that for many it will be an affront to see this film off the podium, and you are right, but for me the four remaining films are very dear and therefore couples in position.

I admit that Terminator is very cool and masterful. I would highlight above all, in addition to James Cameron, the work of Stan Winston in the design of the Terminator and that great opening theme of Brad Field.

But the story of a man who travels back in time to save a woman who will engender the leader of the human resistance is also surprising. A masterpiece of the genre.

I have a soft spot for this movie. In general, for almost all adaptations of Philip K Dick. This film is a science fiction classic that has left us images to remember with the already famous three boobs.

Arnold plays Douglas Quaid, dissatisfied with the destiny of his life, he longs to live adventures and go to Mars so he goes to the company Memory Call. This company offers the possibility of traveling to impossible places by inserting false memories in the mind. So Quaid travels to Mars as a secret agent who saves the planet and stays with the girl, a movie dream that contains much more than it seems.

The soundtrack is mythical and Canal Plus used it as the headline for soccer matches on Sundays.

Ufffffffff. What can I tell you about this wonder. To begin with, it shows us that John McTiernan is the top five of the directors of that time. What a way to narrate. To this we must add another great role of the Austrian filmmaker who is initially prey here to end up being the hunter.

I also want to highlight the design of Predator, I don’t want to get involved with the anecdote that Jean Claude Van Damme it was for a few days the Predator until it went out of production. 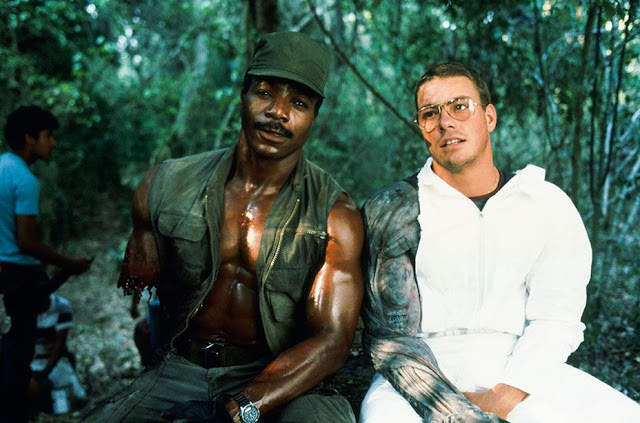 After the first failed design, Stan Winston was signed, who bequeathed us another creature for posterity.

Some time ago I told you about Jiu Jitsu and the plot so similar to Predator. We better not get into it.

What a gem. A milestone of science fiction and digital effects. At the time of its release, with a budget of between 94 and 102 million dollars, it became the most expensive film ever made. Terminators 2 It had a lot of CGI, especially in relation to the T-1000, whose structure was made of “mimetic polyalloy” (liquid metal), which allowed it to transform into any human.​

In addition to the special effects, the film is a carousel of emotions, the bad guy is invincible, so the T-800 sent to protect the leader of the human resistance in the future can do little in close combat.

The film has left scenes to remember such as the death of Miles Dyson or the dream of Sarah Connor and No Fate.

This film greatly impacted me in the cinema, being perhaps, together with Mad Max, Fury Road, the best experience I have had on the big screen.

So far this list, now it’s up to you in comments. I read you