Eurovision, the live broadcast of the final. The last evening of the music contest will be staged at the PalaOlimpico in Turin on Saturday 14 May. Mika, Laura Pausini and Alessandro Cattelan present the event, exceptionally in Italy thanks to the Maneskin victory last year. The Roman band will be a guest and will perform with the song “Supermodel”. The Mahmood-Blanco duo are competing for our country, winners in Sanremo with “Broglie”. They will challenge the other 24 representatives of the competing nations. The Ukrainian band Kalush Orchestra is favored, with the song Stefania in the original language.

Eurovision 2022, the lineup of the final: the Czech Republic opens, Maneskin super-guests, waiting for Mahmood and Blanco

The live broadcast of the final

22.26 – Belgian footballer Jeremie Makiese, who left the Royal Excelsior Virton (Serie C team) to sing at Eurovision, shows up in a silver jacket and his black voice with applause. l “Miss You” is a hit. He sings in English, but he’s from Antwerp. At home he achieved success thanks to the talent “The Voice”.

22.23 – The fifteenth in the lineup is Azerbaijan. Nadir Rustamli sings “Fade to Black”, seated on a staircase mounted on the stage for the occasion, on which he even lies down. After a slow start, he pulls out a voice that dishevels his hair.

22.20 – Sparkling dress, black helmet of a diva of yesteryear and the compliments of Cristiano Malgioglio. Monika Liu charms with her elegance. The Lithuanian sings Sentimentai, first for a long time in the charts of her country. It is the only case of this edition in which the artist as well as interpreter is the only author of the piece.

22.16 – The German Malik Harris takes the stage at Eurovision thanks to his victory in the Germany 12 Points contest. The song is called “Rockstar” and is sung in English. A 360-degree artist, he starts playing the piano, then moves on to percussion and ends up in the center of the stage playing the acoustic guitar. In his song there is also a rap part.

22.12 – It’s up to the highly anticipated Kalush Orchestra, Ukrainian band that sings “Stefania”, entirely in their mother tongue. They are the favorites and not only because they represent the country to which everyone feels closest at the moment. The song is fun and flows well. Rap and pop mix, accompanied by instruments played great. At the end of the exhibition the appeal for Mariupol.

22.05 – The very blonde S10 sings “De Diepte” in her mother tongue, Dutch. Dark, simple, clean out. Like her voice. The song seems to be able to aim high. The public appreciates and accompanies it. In the Netherlands she is one of the most followed artists and we do not find it hard to understand why. Good.

22.00 – It’s time for Chanel Terrero, a Cuban naturalized Spanish. The singer (and actress) performs with “SloMo”, her first single with which she triumphed at the Benidorm Fest. In her look, she is very reminiscent of Beyoncé, especially for her backside that she puts in plain sight without fear. Together with her, a corps de ballet follows her in the decidedly demanding choreography. Her voice, however, does not lack her. The final sparks close the show in a big way.

21.55 – It is finally the turn of the hosts. Mahmood in a black dress. Blanco, who walks in when the exhibition has begun, in a white dress with glitter. The chemistry is the same as in Sanremo, the “Chills” arrive again tonight. Accompanying them is a piano, on which Blanco climbs for his solo. In the end, I hug her. Now we just have to cheer.

21.49 – Guitar, voice and a paper house that holds her prisoner, but from which she manages to escape. 22-year-old Rosa Linn sings for Armenia. Her song is called “Snap” and is an invitation to get rid of all the pain we carry inside of her. In her scenography, many white post-its, which match her outfit.

21.40 – It’s up to those who are already the moral winners of the festival. Subwoolfer (Norway) beat the competition thanks to their stage presence. Two yellow wolves in suits, three fully masked dancers. And the song “Give That Wolf a Banana” isn’t that bad either. The choreography is destined to conquer TikTok. Applause for them, like in the semifinals. 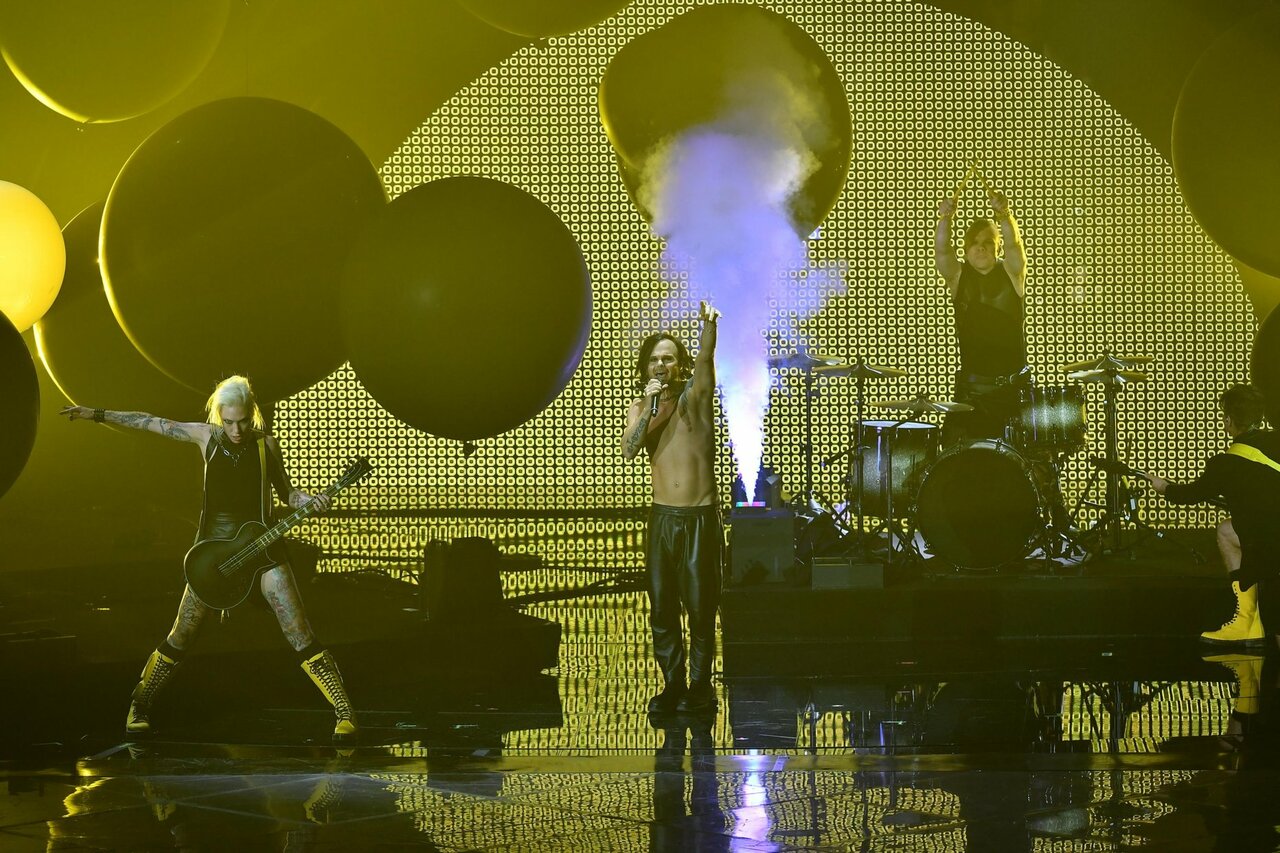 21.37 – The first of the big five to take the stage is France. The Blues team is made up of multi-instrumentalist Alvan, accompanied by the Breton singing trio Ahez, three girls who have known each other since high school. They sing in the regional language Didgeridoo. Their “Fulenn” has Arabic rhythms and involves. On stage, fire and flames, literally. Also this year the transalpines can hope for victory.

21.34 – Last year Switzerland lost head to head with Italy, who won Eurovision with the Maneskin. And the pain of that defeat inspired Marius Bear’s “Boys do Cry”. Seriously, the blonde Swiss brings a ballad that is aiming for victory again this year. No particular choreography, Marius just needs a leather jacket and his voice to convince.

21.29 – On stage it’s The Rasmus’ turn and it is immediately “but what do the 2000s know…”. The Finns bring rock to Eurovision with “Jezebel”, a song that perhaps does not convey the emotions of the super hit “In The Shadows”, which made them famous. But the performance is pleasant. Appreciated the choreography inspired by the horror film “IT”.

Rocking hell that was good wasn’t it! 🔥🎈🇫🇮 #Eurovision pic.twitter.com/j3ydQrFhHN

21.26 – After two songs to dance, it’s up to the Portuguese Maro with her warm and enveloping voice and a song that touches deeply. “Saudade saudade”, another song sung in English, is dedicated to the late grandfather. And the transport of him shows.

21.20 – The spanish vibes of the Romanian Wrs are back, who won the final with “Llamame”, whose refrain immediately enters the head. The of him is a song dedicated to love, suffering and obstacles that a relationship can often encounter also due to external influences. The voice is there, the performance always has a somewhat borderline effect.

21.15 – The Czechs We Are Domi open the evening, who on Thursday were the last to perform in the second semifinal. A burst of electro-pop energy, their “Lights off” (in English) is one of the most engaging songs of this Eurovision. The promoted singer Dominika dances and involves the audience.

21.06 – Now the flag parade. All the finalists parade on the stage with flags.

21.00 – With the performance of Give peace a chance by John Lennon, in Piazza San Carlo with the Rockin’1000 to give life to a sort of Fourth Estate of Peace, the final of the Eurovision Song Contest opened, welcomed by the applause from the Pala Olimpico. Laura Pausini sings her medley. In row Welcome, Le cose che vivi, Io Canto, La solitudine and Box, her latest single. 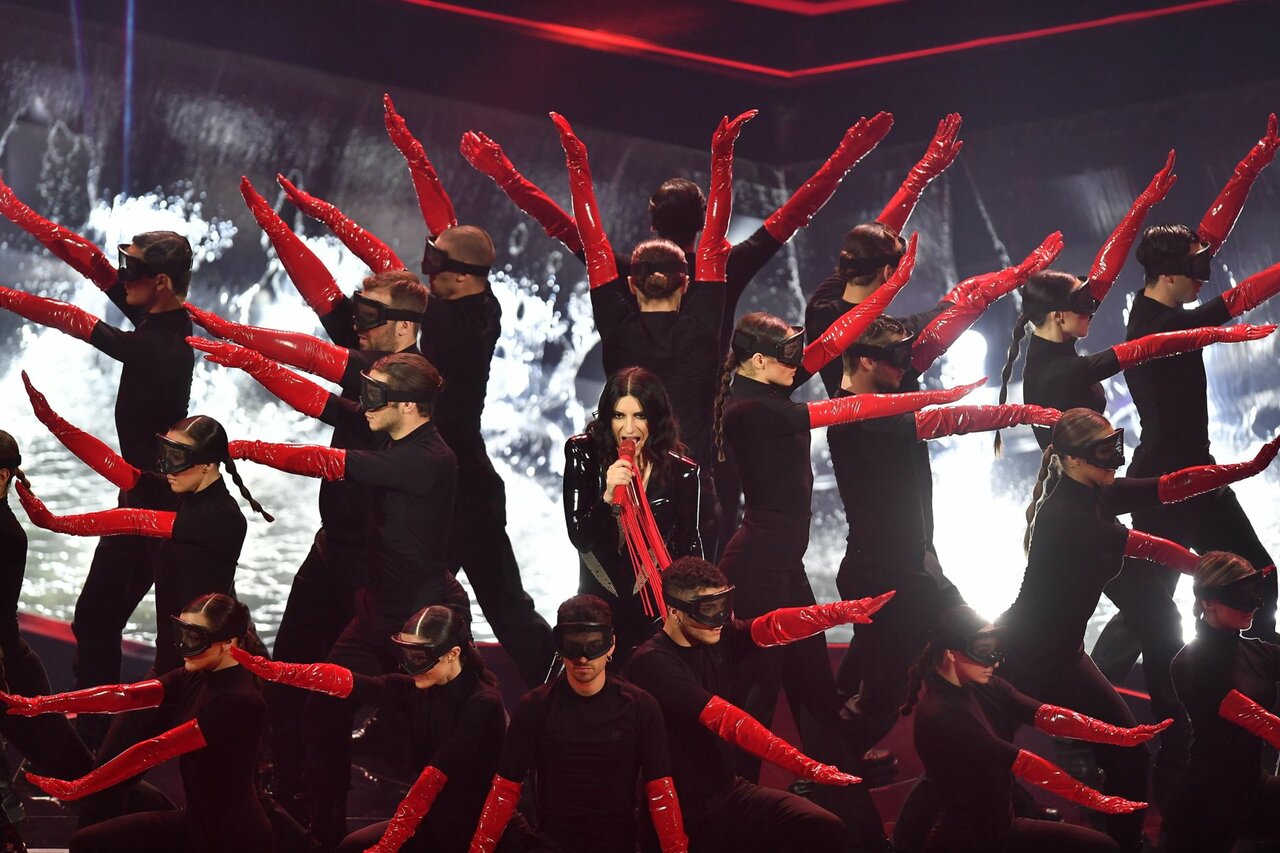 20.55 – «Very soon in the Eurovision final, the continent and the whole world will listen to the words of our land. I believe that, in the end, this word will be “Victory!” ». Ukrainian President Volodymyr Zelensky says this in a video message on Telegram to support the Ukrainian band involved in the race. «Europe, vote for the Kalush Orchestra, at # 12. Let’s support our compatriots, let’s support Ukraine! », Is Zelensky’s invitation.

20.50 – Yellow skirt and electric blue jacket, blue yellow make-up. Cristiano Malgioglio chooses the colors of Ukraine for the outfit of the final evening as a commentator on Rai1 of the Eurovision Song Contest 2022.

The lineup of the final

What time do Mahmood and Blanco sing?

The performance of Mahmood and Blanco is scheduled at 21.54. According to the strict schedule of Eurovision, the wonderful “Chills“it will be heard by all of Europe in the first half of the evening. From that moment on the rest of the continent could decide to reward the winning song of the last Sanremo, giving Italy an incredible encore after the Maneskin victory last year.

The judgment is made up of 50% by the public who express themselves via televoting and for the remaining 50% by a jury of experts. The results are added together and decree the final winner. Each viewer can express a maximum of 5 preferences. Here’s how to vote: