The Crew-4 mission has started, which includes Samantha Cristoforetti, an Italian astronaut of the European Space Agency (ESA) who will be engaged for almost six months on the International Space Station (ISS) for the Minerva mission. With her on the Crew Dragon Freedom capsule are Commander Kjell Lindgren, Pilot Bob Hines and Mission Specialist Jessica Watkins.

Everything went according to plan and the Crew Dragon departed from ramp 39A of the Kennedy Space Center (Florida) powered by a Space X Falcon 9 rocket and docking with the Space Station is expected around 02:15 this night. For AstroSamantha it is the second mission, after Futura, of 2014-2015. As they left, the astronauts greeted the families and Samantha Crisotforetti sent a kiss to her children before the Tesla took her to the launch pad. 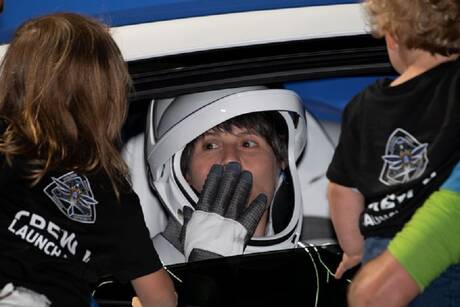 Astronaut Samantha Cristoforetti greets her children before making their way to the launch pad (source: ESA via Twitter)

Towards the launch pad accompanied by the notes of Jovanotti

On the way to the launch pad, there was also the rhythm and the charge of ‘Credo positive’ to accompany Samantha Cristoforetti. Jovanotti’s song is in fact the only Italian in the music playlist that the astronaut has chosen, together with his NASA colleague Jessica Watkins to cheer the journey by car to the launch pad 39A of the Kennedy Space Center

. The list, published by ESA on Spotify, includes 23 highly successful songs, united by references to space and women’s determination: from Jamiroquai’s’ Cosmic girl ‘to Alicia Keys” Girl on fire ‘, passing through’ Starship ‘ by Nicki Minaj, ‘On top of the world’ by Imagine Dragons, ‘Fly away’ by Lenny Kravitz and ‘Run the world (girls)’ by Beyonce.

The journey to the Space Station
The journey to reach the Space Station will last at least 16 hours and everything will be managed autonomously by the computers of the Crew Dragon capsule, but if necessary the astronauts can take control of it at any time. The launch also marked a new re-entry success of the first stage, in its fourth use, which after pushing the rocket in the first few minutes completed a controlled descent, leaning on a floating platform called ‘A Shortfall of Gravitas’ in the Atlantic Ocean. .
The docking maneuvers to the Harmony module are expected to complete tonight at 2:15 am Italian time, while the hatch is scheduled to open around 3:45 am.

The seven crew members of the Space Station will welcome the four astronauts of the Crew Dragon, including AstroSam’s colleague, Matthias Maurer, also from ESA, who arrived on board in November 2021 with the Crew-3 mission and who soon I will have to return to Earth, after 6 months in orbit.

Cristoforetti’s entry on the Space Station will mark the beginning of the European Minerva mission. In the months that he will spend on board, the astronaut will have the role of leader of the American orbital segment, which includes the US, European and Canadian modules and components of the Station. The Italian astronaut will work on numerous scientific experiments, six of which of the Italian Space Agency (ASI) and will help complete the installation of the 11-meter long European Robotic Arm (Era), which will be used to move loads around the Russian section of the Iss: an operation that could include a spacewalk, currently unconfirmed.

Saccoccia (Asi), AstroSam symbol of Italian excellence
Space exploration is one of Italy’s spearheads and astronauts are among its most evident symbols: the president of the Italian Space Agency (ASI) notes this on the sidelines of the launch of Crew-4, the mission that will bring Samantha Cristoforetti, Italian astronaut of the European Space Agency (ESA), for about six months on the International Space Station (ISS).
“The exploration of space, both human and robotic, has always represented one of the spearheads of Italy’s role in international space activities”, observes Saccoccia. “The astronauts – he continues – are evidently the most visible symbol of this Italian excellence! The return of Samantha Cristoforetti this year on the International Space Station, obtained through our negotiations with ESA in recent years, also symbolically underlines the importance that for some time our country has been focusing on space activities “. AstroSam will be engaged for about 6 months on the ISS as part of the Minerva mission, in which she will conduct dozens of important scientific experiments. “Good luck – concludes Saccoccia – and good luck to Samantha for this new, extraordinary adventure for her!”.