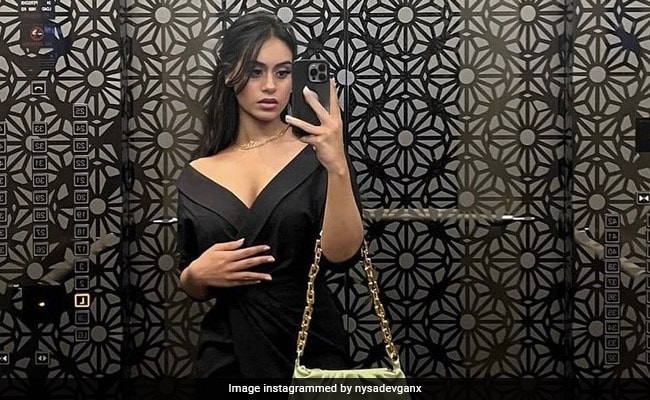 There is a lot of discussion on social media of Kajol and Ajay Devgan’s daughter Nyasa Devgan. New pictures of Nyasa become viral on social media as soon as they arrive. Being the daughter of Kajol and Ajay, people are also very excited to know about Nyasa. In this sequence, a latest photo of Nyasa has surfaced on the internet, in which she is seen with her friends. Nyasa can be seen in a very glamorous style in this photo. After seeing this photo, people have once again become crazy about her stylish looks.

This beautiful picture has been shared from Nyasa Devgan’s fan page, in which Nyasa is seen in a very glamorous avatar. In the picture, you can see Nyasa wearing a satin short cream color dress on the right side. In this picture, all the friends of Nyasa are looking ahead and they are standing behind and posing while looking at the camera in front. Nyasa is looking very graceful and elegant in her look. Social media users are giving their reactions fiercely on this photo of Nyasa.

Commenting on the photo, one social media user wrote, “Gorgeous Nyasa”, while another wrote, “Summer Girl”. Let me tell you, recently Nyasa Devgan walked the ramp for Bollywood’s famous fashion designer Manish Malhotra. During this, she was seen in a very stylish outfit, some pictures of which also went viral.