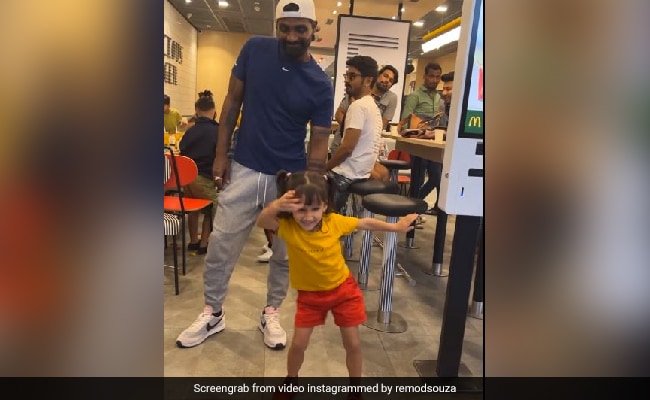 This little dancer made a splash on Pushpa’s song

Allu Arjun’s Pushpa created a ruckus everywhere as soon as it was released. The songs of the film also created a lot of buzz on social media. Its song ‘Sami Sami’ also created a lot of uproar on social media, and it was well liked by the fans. Many videos were also made on this song and this video also became very viral. Now Remo D’Souza has shared a video in which he is seen with DID’s contestant Adyashree. This little dancer is doing a wonderful dance in this video. She is doing Rashmika Mandanna’s perfect steps on Sami Song. Adyashree is winning a lot of hearts of fans with this video.

Remo D’Souza is also enjoying Adyashree’s dance very much. This video has got more than three and a half lakh likes in just three hours and fans are constantly commenting on this video. A fan has commented ‘So cute.’ One fan wrote, ‘Nice dance baby ne, Nice Remo sir.’

Let us tell you that Remo has directed many films along with dance choreographer. He started his career in the year 1995. In 2000, he did choreography in the film ‘Dil Pe Mat Le Yaar’. Along with this, he has directed many films like ‘Flying Jatt’, ‘Race 3’, ‘Faltu’, ‘ABCD’, ‘ABCD 2’, ‘Street Dancer’. Let us tell you that he has also been seen as the chief judge in the reality show ‘Dance Plus’.