Due to the opening of the film ‘Attack Part One’, due to less screens, even five crore rupees could not be done. To attract the youth, John himself wrote a story that the new generation of youth have already seen on the big screen in many English films. Lakshya Raj Anand, a young director from the family of director Siddharth Anand, has started his innings as a director with this film, but his first film will compete with ‘RRR’ at the box office. 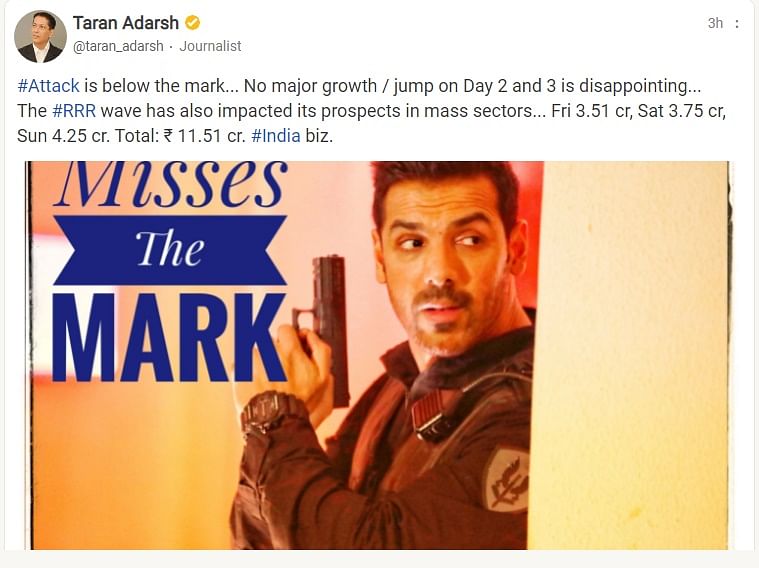 The collection of Lakshya Raj Anand’s John Abraham starrer ‘Attack Part One’ did not show the same jump on Saturday as compared to Friday. The film earned Rs 7.47 crore on Friday and Saturday collections. According to the initial figures of Sunday, the film earned only Rs 4.30 crore on the third day of its release. Although the collection of the film has been around Rs 11.80 crore so far, but it is not considered enough considering the distribution rights of the film.

Although the recovery of the film ‘Attack Part One’ is said to have been done from the satellite and digital rights of the film, but the film’s not doing good business at the box office may have an impact on the branding of John Abraham. After the film ‘Satyamev Jayate 2’, this seems to be his second successive film which could not do well at the box office. His film ‘Pagalpanti’, which was released just before the Corona transition period, was also a flop.

‘Satyamev Jayate’, ‘Dhoom’, ‘Batla House’, ‘Parmanu’, ‘Welcome Back’ and ‘Race 2’ are counted among the most successful films of John Abraham’s career so far. Is. The director of the film ‘Attack Part One’, Lakshya Raj Anand and John Abraham first met about 13 years ago during the making of the film ‘New York’. Then Lakshya Raj Anand was working as an assistant director in that film.