Fortnite: Battle Royale has received during the course of this Tuesday morning February 15, 2022 a new patch for the current one Season 1: Back of Chapter 3. The Epic Games game has been updated once again to bring us the version 19.30 which this time adds new features such as new and improved gyroscope controls, the removal of the initial mode selection screen and more. As always it also brings fixes and corrections to all platforms the game is available on. below we summarize the details most relevant and the changes that have been included with the 19.30.

We have started disabling matchmaking in preparation for the v19.30 update, and server downtime will begin soon.

Thanks to patch 19.30, and in collaboration with Julian “Jibb” Smartspecialist and creator of the rapid movement of the stick, Epic Games has added optional new gyroscope controls in Fortnite that are now available for all supported platforms. Until now, only the Nintendo Switch and Android mobile versions had gyroscope-based motion controls, however, as of today the PlayStation 4, PlayStation 5 and PC versions they also include more complete gyroscope controls.

They also include fast stick movement, which allows pointing the right stick to quickly move the camera in that direction. To give you a better idea of ​​these concepts, you can watch Jibb’s video below or read more about this feature on Epic Games Blog.

The other relevant change we have with Fortnite update 19.30 is that Epic Games has decided bypass the initial game screen that appeared on PlayStation, Xbox and PC and that allows us choose how we want to enter to play (that is, if we want to go to Save the world, Battle Royale or Creative mode). 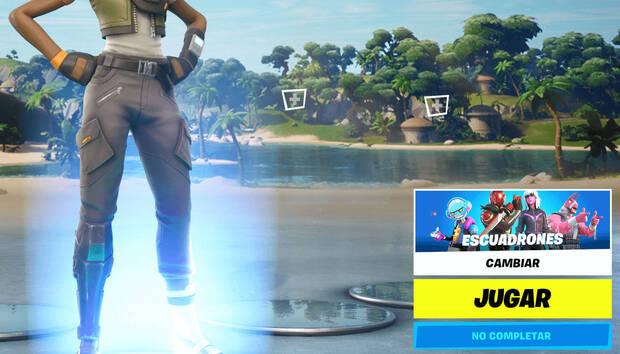 Specifically, Save the world and Creative mode now are located in the “From Epic” row on the Discover screen, along with options like Squads, Impostors, the Creative Hub, or the Battle Lab. If you’ve recently played Save the World or Creative, they’ll also appear in the “Recently Played”, in the “My Library” tab. However you can add both modes to Your favorites to access them more easily whenever you want.

This update brings some general changes and fixes for the game, as always we can extract them from the Trello from Epic and from the press releases. They are the following:

All cosmetics and skins of patch 19.30

Naturally this version 19.30 of Fortnite also brings us a lots of new cosmetic items and skins that dataminers are responsible for collecting. Over the next few days we can have them in the in-game store if we want to acquire them with turkeys. Here below we show you the news in this regard:

Images of all new cosmetics/shop bundles added in v19.30 (posted since we now have mappings)#Fortnite #FortniteLeaks pic.twitter.com/CPwlDvZkWF— iFireMonkey (@iFireMonkey) February 15, 2022

Remember that you can visit our complete guide to know the best tips and tricks and easily overcome all the challenges of the season. Fortnite is a Battle Royale that is free to PC, PS4, Xbox One, Nintendo Switch and devices Androidyou can read our analysis.