There are very interesting numbers in the study released by the Federal Institute of Telecommunications on user preferences in terms of applications, services and online businesses during the pandemic. The results have both qualitative and quantitative findings, but in those that are nationally representative, the IFT has found that Mercado Libre has a 63.7% preference of Mexican users.

That number is more than double Amazon’s purchase preference of 30.3%.

Mercado Libre vastly outperforms Amazon in all age groups as seen in the following graph: 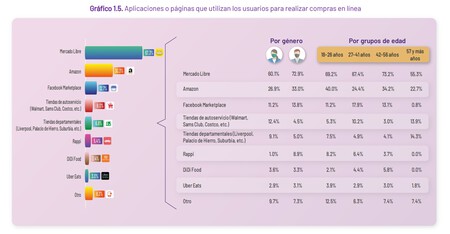 In times of COVID-19, 20.5% of fixed internet users said they had made some online purchase according to the study.

It is notable that the predilection for Mercado Libre increases in people between 42 and 56 years old, while the segment where Amazon is most popular is between 18 and 26 years old. It is also noteworthy that while Mercado Libre has a wide advantage over Amazon, the latter has almost triple preference over third place, Facebook Marketplace.

Self-service stores occupy fourth place as they are all grouped together. The IFT includes Walmart, Sam’s Club and Costco in the group, followed by department stores such as Liverpool, Palacio de Hierro and Suburbia. Since the study deals with apps or pages for online shopping, Rappi, DiDi Food and Uber Eats were also added as options, with these platforms occupying sixth, seventh and eighth place respectively.

The e-commerce preference report is so detailed that it also includes the average satisfaction rate for each platform. Although Mercado Libre is the favorite, in reality Amazon is the one with the highest satisfaction rate. They are followed in order by DiDi Food, Facebook Marketplace, Mercado Libre, self-service stores, department stores, Uber Eats and Rappi.

The issue of delivery platforms is interesting because according to IFT statistics, Rappi is the most used app although paradoxically it is the one with the worst satisfaction index.

Regarding products that are most purchased in electronic commerce in Mexico, the first occupies it, and by a wide difference, Clothes and shoes. It is followed by electronics, appliances, pantry, accessories and cosmetics. 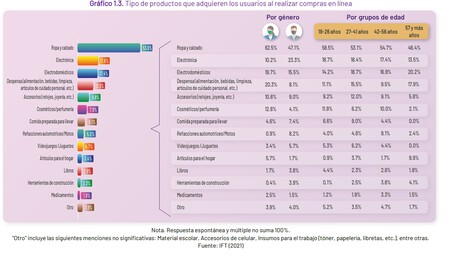 The same IFT study revealed that TikTok is more used than Twitter in Mexico, but it is still surpassed by Instagram. WhatsApp is the most used app with a 95.7% preference and it is followed by Facebook with 86.8%, Instagram with 36.4%, TikTok with 23.2% and Twitter with 20.2%.