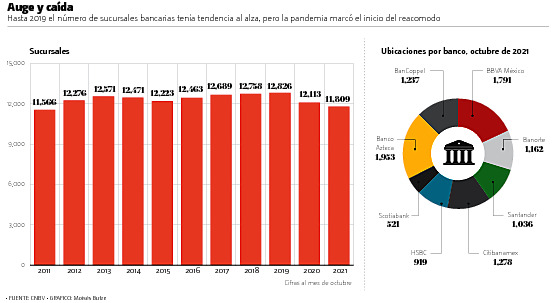 From October 2019 to the same month in 2021 the banks 1,117 branches closed in the country, as the number of facilities was reduced from 12,826 to 11,809, which represents a decrease of 7.9 percent, according to the National Baking and Stock Commission (CNBV).

This places the physical banking infrastructure at the same levels as they had in 2010, and this is the most pronounced drop in the number of branches since it has been registered.

In this period, the beginning and worst moment of the economic and health crisis due to covid-19 occurred, in which credit institutions were forced to close in some parts of the country and give a greater boom to their digital strategies to carry financial services to more clients.

Sector executives indicated that although the strategy of the banking institutions is to reduce the number of branches in the face of the digital phenomenon, these will continue as one of the main means of communication with their customers.

For Pedro Valenzuela, director of customer experience at Banregio, the branches should be kept as a business center over carrying out transactions, since customers come to them to answer questions about their assets.

“Many people not only come to the branches to transact, they also come to talk with their executives. So the evolution of the branch should be an area to understand the needs of customers, expand businesses and assets, giving them a good approach to carry out business, “he explained.

Sergio Hinojosa, executive director of digital for Banco Santander, assured in this regard that in the coming years they do not expect branches to disappear due to more technological solutions than banks apply in their services, given the need for “face-to-face” care.

“We see quite clear segments of the population where there are those who love to do everything from the cell phone and who hope that everything can be done through this channel, but there are also those who like it and expect face-to-face treatment and they like to go to the branch, potentially later they can move to the digital world, but now they wait and need that attention ”, explained the manager.

According to the 2021 Annual Financial Inclusion Panorama of the CNBV, banks concentrate 75 percent of the country’s bank branches, where Banco Azteca is the largest with 1,953 units that together with BanCoppel did not stop growing despite the pandemic.

The state with the largest number of branches was Mexico City, where 1,828 were concentrated; while at the municipality level it was Guadalajara, Jalisco, with 380.

The percentage of the population with access to at least one branch at a distance of 4 kilometers was 77 percent, which represents 19.6 percent of localities in the country.

In the international context, at the end of 2019, the CNBV reported that the number of commercial bank branches for every 10,000 adults was 1.4 for Mexico. This figure is higher in other countries such as Brazil with 1.9, Honduras with 1.8 and Colombia with 1.4; and lower in countries like chili with 1.3 and Peru with 0.7.