Today, November 25, the winner of the second Polkadot parachain auction was known, resulting in the winner Moonbeam, After that madness that he had in the first edition where despite leading the table during almost the entire auction, Acala Network ended up as the winner of the tender. Although this time Moonbeam was the winner, we believe it is convenient to review the event again and the changes that occurred in the auction that took place between the 18th of this month and today.

First of all, we see it necessary to review what the Polkadot auction consists of, an event that is nothing more than a bidding assembly where those who want to take part as financing bidders, must place their DOT as collateral to support the blockchain project that they would like to see connected to the parachain space of the network, and in return receive a reward.

The auctions are developed under the modality of candle auctions, an auction modality that despite being the first in the list does not guarantee the winner because there is a secret bidding period during the auction that is the one that is taken into consideration to determine the triumphant project and avoid possible dishonest movements or last minute anchors.

In a complete review of this second auction, the network data referring to the DOT cryptocurrency should not be left out, currently at the time of writing this note, according to data from Polkastats 1,128,167,412.20 DOT have been issued, of which 53% (608,849,597.79 DOT) are currently in staking, a number no less important given that it represents 10% fewer coins in staking in reference to the end of September than the figure was 63%, of course a relevant difference without stopping considering the amount of DOT, which were less in circulation since then, time before they announced the start of the auctions and began the great bullish rally of the currency that took it to USD 55.09.

Regarding the DOT placed and offered in the auctions, if we perform a calculation with the official data from the polkadot auction page that indicates a total of 95,006,212 DOT placed in guarantee at the close of the second auction and we consider the total issued in the network we find that 8.41% of the coins have been moved to auctions, which indicates that part of the decrease in total staked that Polkadot has presented could have been moved to auctions or liquidated in profit-taking at the peak of USD 55, while the other 39% would be in the hands of the other holders and within exchanges.

In this second opportunity, as we mentioned at the beginning, the great winner of the auction turned out to be Moonbeam, And they also made it known from Polkadot via twitter:

Moonbeam will be onboarded at block # 8179200 [Dec. 18] at the beginning of lease 6 with the other first 5 auction winners. Over 200K network stakeholders locked up DOT in favor! Https: //t.co/ZFSzeAhc4x pic.twitter.com/JMEE3sitaL

The project that turned out to be Polkadot’s second parachain without considering Shell, was Moonbeam, winning with a total of 35,759,931 DOT received in guarantee of financing, at the time of writing this note, this amount would represent USD 1,431,827,653.00 and 37.64% of the DOTs that have been put up for auction among all the projects, including Acala, the winner of the previous auction.

It is also worth noting regarding Moonbeam that the increase in coins received for financing since the beginning of this second tender until now, when it has been named the winner, turned out to be 4.26%. 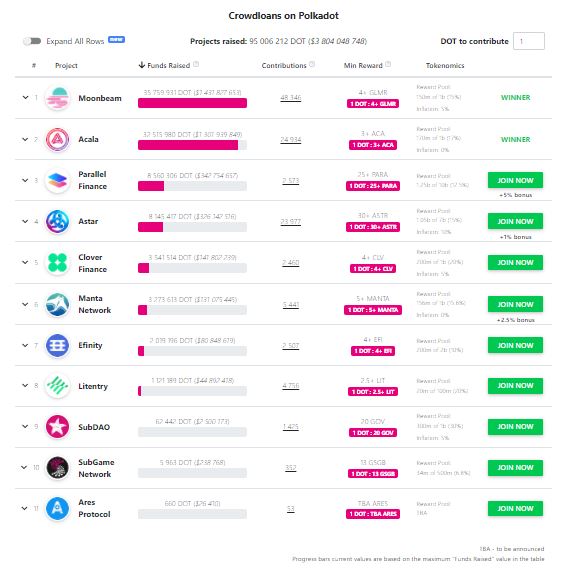 One before and one after

With respect to the other projects, which will be disputed in the next auctions for their parachain place on the Polkadot blockchain, it is worth noting the fact that yesterday when the auction ended, Parallel Finance received a significant number of DOTs for financing that led to it being placed in the second box, above Astar, the project that historically since the auctions began had remained behind Acala and Moonbeam. The increase of Parallel Finance in relation to the start of the auction until the end was 36.61%, with a large part of it between November 23 and 24, and registering as the highest that has occurred so far.

Astar for its part, which after being relegated to third position after the increase seen in Parallel Finance, it is also necessary to point out that it also had an increase of 6.65% of DOT received for financing but despite this not enough for keep second position. Regarding the fourth and fifth position of the auction table, Clover Finance and Manta Network, are competing for the position for a little more than 300,000 DOT, both each have had an increase of no less than 5.78-6.28% of DOT received regarding the start of the auction.

Finally, to put more perspective, the average income or increase in DOT has been 11.91% among the first five projects, from the beginning of auction number two until now, the end of it.

Incidents in the DOT listing

Currently, DOT is as we mentioned above, lateralizing in a lower zone of the range of USD 40-45, the price is at the Fibonacci level of 50%, which shows strength on the part of the bulls in maintaining the price. price at least above USD 35 and close to USD 40, Given that in the previous decline that the price followed the retracement of Bitcoin, the lowest price level that it touched was USD 37.53, a price zone above the 38% level of the Fibonacci retracements, if it still remains above that level. DOT chart level, accompanied by its fundamentals, are bullish, which is why this area is very important to defend otherwise the price could fall to USD 30. 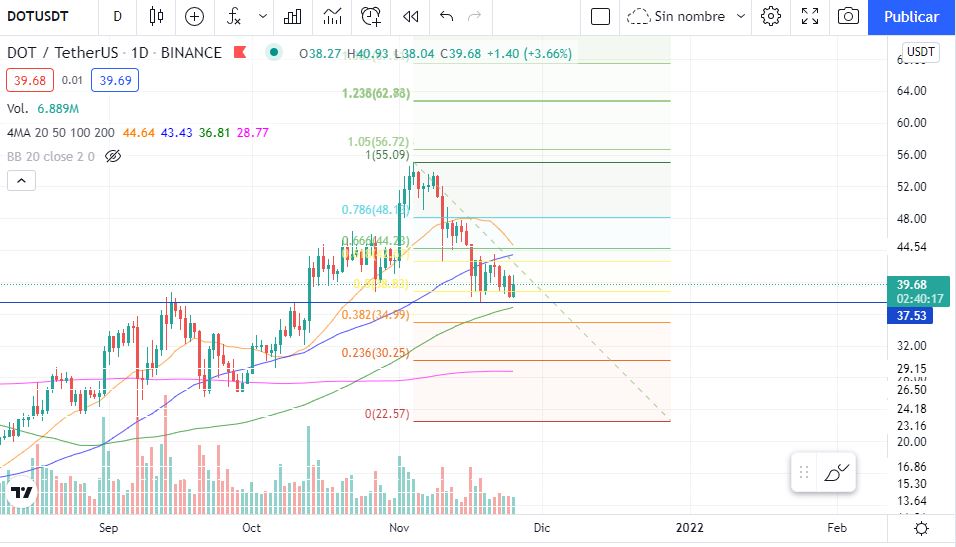 In the event of an increase in its price, it can be noted that In USD 43 there is quite a strong resistance to overcome because it is specifically in the golden pocket area, a profit-taking area for traders, and that it is likely that the price will seek that specific area because it is the crossing area between the MA 20 and the MA 50 days in case of maintaining the price lateralizing, and considering that moving averages work as price magnets.

It is important to note that you should not consider this as an investment recommendation or trading operation, it is only an informative and technical note that the editor makes according to the behavior of the movements that occurs in the market, and does not expressly represent the overview of Cointelegraph in Spanish.