François Ozon’s cycle includes UNDER THE SAND, SWIMMING POOL, 5 X 2 and SITCOM, films from the late 1990s and early 2000s, whose author has been noted for his stories melodramatic and contemporary. Denis Villeneuve’s selection is made up of MAELSTROM and COSMOS, one of his first works.

MUBI presents VISIT, OR MEMORIES AND CONFESSION , by Manuel De Oliveira, personal and unpublished work for the public until his death in 2015. Within the world of animated short films, it will be exhibited THE BONES, by Chileans Cristóbal León and Joaquín Cociña, a ghostly tale and the world’s first stop-motion film.

Another great premiere is VOYAGE OF TIME, by Terrence Malick, a film that took more than forty years to make and recounts a journey through the evolution of the universe and life, with striking images.

The platform presents exclusive content such as PAPICHA, by Mounia Meddour Gens, and JUNIOR, by Julia Ducournau, both feminist films that support a struggle against repression and the objectification of women.

Stand out COLD WARby Pawel Pawlikowski, and SORRY WE MISSED YOUby Ken Loach, the first being an intense love story in the context of the Cold War; and the second, a critique of modern labor market practices.

THE FIERA AND THE PARTY, by Ismael Cárdenas and Laura Amelia Guzmán, is presented as a tribute to Jean-Louis Jorge and has notable appearances by Geraldine Chaplin and Luis Ospina.

VISIT, OR MEMORIES AND CONFESSIONS
Made in 1982 in the house where he lived for almost four decades with his wife, children and grandchildren. The fragile and deeply personal VISIT, OR MEMORIES AND CONFESSIONS, by Manoel de Oliveira, was finally seen by the public in 2015, when the director passed away at the age of 106. Oliveira always had an appetite for the grand and the intimate, sometimes simultaneously, and this film is a fitting elegy for a career we are still discovering and savoring – December 2

THE BONES
It premieres exclusively in streaming THE BONES, from the duo of directors Cristóbal León and Joaquín Cociña (The wolf house), just 3 months after its presentation at the Venice Film Festival, where it won the Orizzonti Prize for best short film. The short film produced by Ari Aster is a ghostly and fictional account of the world’s first stop-motion film. This myth about the origin of animation channels the transforming political energy of today’s Chile – December 8

VOYAGE OF TIME
Narrated by Brad Pitt and shown only in IMAX theaters, Terrence Malick’s VOYAGE OF TIME (2016) Odyssey comes to MUBI this month for its digital world premiere. A film that took more than 40 years to make and that the visionary American filmmaker describes as “one of my biggest dreams.” VOYAGE OF TIME take an ecstatic journey through the evolution of life and the universe with impressive wildlife and landscapes, as well as majestic images of the cosmos- December 17

PAPICHA
Mounia Meddour Gens’ debut film is set in Algeria in the 1990s as the country finds itself in the midst of a civil war. A feminist portrait full of energy and charisma that uses fashion as a metaphor and weapon against repression. He was part of the Un Certain Regard selection at Cannes in 2019 – December 1

JUNIOR
In the run-up to the arrival of Titane, MUBI presents Julia Ducournau’s debut film, JUNIOR (2011), 22-minute short where the protagonist is the victim of a strange metamorphosis, making a critique of the objectification of women in the most cronenbergian way possible – December 13

THE FIERA AND THE PARTY
Fascinating meta film directed by Israel Cárdenas and Laura Amelia Guzmán that works as a tribute to Jean-Louis Jorge. It stars Geraldine Chaplin, who plays an actress looking to shoot an unfinished film by the Dominican director. The participation of Luis Ospina stands out both as support for the duo of directors, as well as his role in the story – December 21

COLD WAR
Director Paweł Pawlikowski, winner of the award for Best Foreign Film with Ida (2013) reflects on the possibility of a love without borders in an ideologically polarized world by the cold war. This gripping black and white love story, exquisitely shot, was nominated for three Academy Awards, including Best Director – December 25

SORRY WE MISSED YOU, a devastating film with a shocking script, by politically committed British social realism author Ken Loach, a two-time Palme d’Or winner for I, DANIEL BLAKE (2016) and THE WIND THAT SHAKES THE BARLEY (2006). His latest installment makes a strong criticism of the ruinous practices of the modern labor market – December 26

A COSMIC TRACK: EARLY FILMS BY DENIS VILLENEUVE
We are pleased to present an exclusive look at Denis Villeneuve’s early works, showing his second feature film MAELSTROM (2000). Narrated by a fish, it is a playful, often laughing allegory that follows a woman who begins dating the son of a man she killed in a car accident. The special includes the anthology, COSMOS (1996) and AUGUST 32ND ON EARTH (1998). MAELSTRÖM – December 4. COSMOS – December 5

Cao Guimarães’ most intimate film, where he closely follows his wife’s pregnancy process. The result is a beautiful love letter to his wife and son. OTTO – December 7

In December, some films by provocative French author François Ozon, a prolific director best known for his contemporary interpretations of melodrama, are shown. This special begins with one of his best films, UNDER THE SAND (2000) starring Charlotte Rampling, followed by the mysterious and interesting SWIMMING POOL (2001), and then, 5X2 (2004) where he portrays a couple in reverse chronology from their separation to their infatuation. UNDER THE SAND – December 9. SWIMMING POOL – December 16. 5X2 – December 23th. SITCOM – December 12th

BRIGHT STAR
Premiered at Cannes in 2009, BRIGHT STAR, directed by Jane Campion (THE POWER OF THE DOG), is a period drama that focuses on the last three years of the British poet John Keats, seen from the female perspective of his muse, Fanny Brawne. – December 12th

PRELUDES: PARIS OPERA SHORTS
A NIGHT AT THE OPERA
Using archive images, Sergei Loznitsa revisits the gala evenings organized at the Palais Garnier in the 1950s and 1960s. These prestigious evenings brought together both personalities and ordinary people who came by the thousands from the Place de l’Opéra to witness this show – December 20th

LIFE ITSELF
Steve James’ film exposes the life of Roger Ebert, one of the world’s most renowned film critics, creating an honest and beautiful tribute not only to Ebert, but also to the profession – December 27

ALBERT NOBBS
Colombian filmmaker Rodrigo García directs this period film where we see Glenn Close act as a woman who lives her life as a man, named Albert Nobbs, getting several nominations for best actress. A film with impeccable aesthetics and beautifully photographed that tells us about the human condition and loneliness- December 28

SHE ‘S FUNNY THAT WAY
To close the year MUBI presents SHE ‘S FUNNY THAT WAY, the sitcom Peter Bogdanovich wrote with his ex-wife Louise Stratten. Released at the Venice Film Festival in 2014, it features a great cast, Owen Wilson, Imogen Poots, Kathryn Hahn, Will Forte, Rhys Ifans, and Jennifer Aniston, and includes a cameo by Quentin Tarantino – December 31 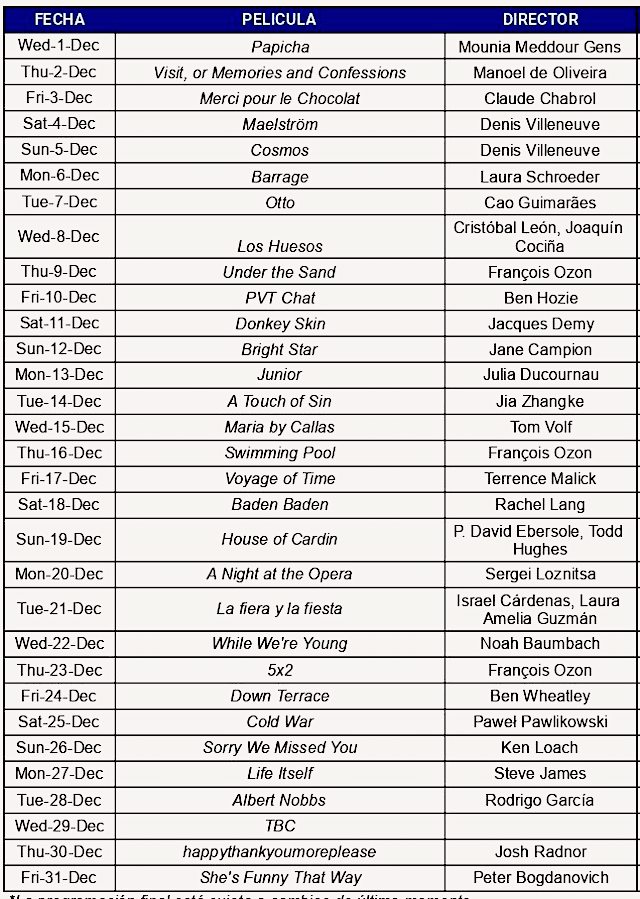 Subscriptions are the best way for readers to directly support independent journalism endeavors and help sustain a quality product.

Thanks to a contribution of just 250 pesos per month (the cost of a coffee), which is debited from any card via Payment Market, subscribers and subscribers access every Friday first thing in the morning to a cared and curated Newsletter with trend analysis and every Wednesday they receive recommendations for movies and series on our channel WhatsApp.

In addition, there are other benefits (such as three months free of charge on the streaming platform MUBI), exclusive videoconferences and significant discounts for all our courses and workshops.

Promotion: Those who join until the end of November will have access at no additional charge to the last 20 exclusive newsletters.

For more information you can write to us at OthersCinesClub@gmail.com