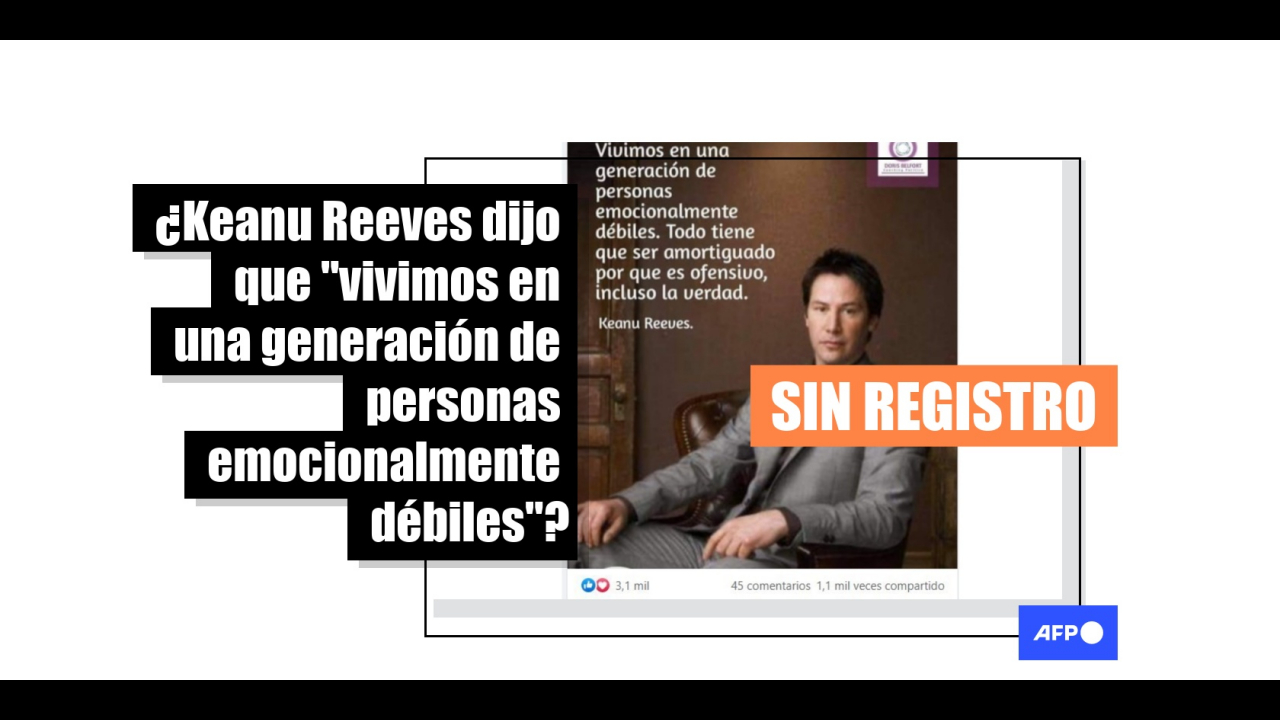 Publications that link actor Keanu Reeves with a phrase about the current generation of “emotionally weak people” and that everything must be “muffled because it is offensive, even the truth”, circulate at least since 2012 with more than a million of interactions in social networks, in several languages. However, the AFP verification team found no evidence to show that the words were spoken by Reeves, and the phrase also circulates without attribution to the artist and alongside images of other personalities.

“We live in a generation of emotionally weak people. Everything has to be muffled because it is offensive, even the truth.”, indicate the publications shared on Facebook (1, 2), Twitter (1, 2), Instagram (1, 2) and websites (1, 2) along with the name and / or photos of the actor, and with slight variations in the text.

The content has also gone viral in Portuguese (1, 2, 3), English and Italian. 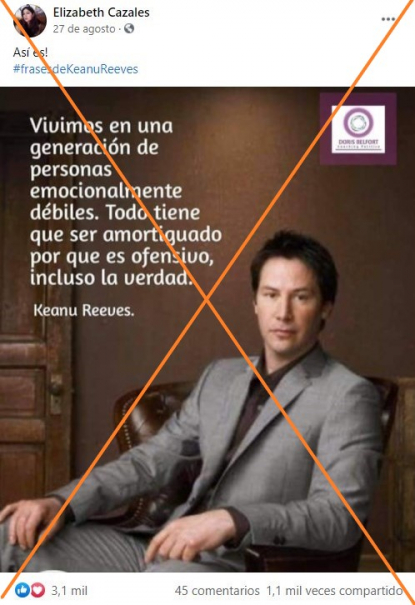 The phrase has been attributed to the protagonist of the movie “Matrix” or has appeared next to his image at least since 2012 in English and since 2016 in Spanish. A search on the CrowdTangle tool showed that content continues to be widely shared in 2021 as well, with more than 400,000 interactions on social media in multiple languages ​​this year.

Internet searches showed that the viralized phrase circulates in English also illustrated with the image of other personalities. It appears, for example, alongside photos of actors Tommy Lee Jones and Sam Elliot.


The text was also placed next to a photo of the artist Gene Wilder characterized as Willy Wonka, in the 1971 version of the film “Charlie and the Chocolate Factory”. Another that appears in the memes is the character of “V for Vendetta” (1, 2).

Screenshots of memes with phrases similar to the one awarded to Keanu Reeves, taken on September 30, 2021

A search for those words associated with the actors and characters also did not give rise to any record that this was the origin of this phrase.

Searches of the text in English and Spanish also showed several entries in which it appears without authorship award on Twitter (1, 2) and on Facebook (1, 2).

In one of the publications in English you can identify the inscription “Whisper” (whisper) in the lower corner of the image. A search of part of the phrase and that term in English led to an entry on the platform of the same name, where users can share messages anonymously.

The oldest entry found on that site, from 2015, has the phrase written in English on a picture of trees in the fog and does not mention the actor either. Similar messages, with the same text, were published in subsequent years on the platform (1, 2, 3).

Google searches for keywords in Spanish, Portuguese, Italian and English showed no evidence that Reeves said the phrase in press interviews or in public statements.

AFP did not find any official profile of Keanu Reeves on social media. In addition, the verification team contacted Rogers & Cowan PMK, the agency representing the actor, but no comment was received until the publication of this verification.

In the past, AFP Factual has verified other content that referred to Keanu Reeves (1, 2).