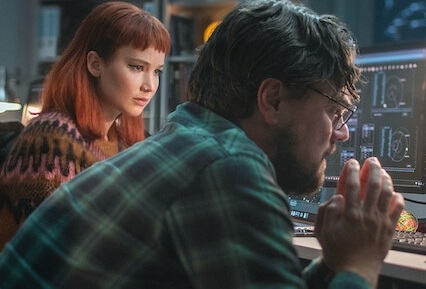 Netflix does it over and over again, it seems that it never tires of releasing new movies, and this time it announced “Don’t look up.” It is worth mentioning that this film has a script and direction by Oscar winner Adam McKay (The Big Short). Plus a cast that includes Mark Rylance, Ron Perlman, Timothée Chalamet, Ariana Grande, Scott Mescudi (Kid Cudi), Himesh Patel, Melanie Lynskey, Michael Chiklis, and Tomer Sisley.

We recently got to see the trailer for “Don’t Look Up,” and it certainly made an impact, for better or for worse.

What is “Don’t look up” about

Don’t Look Up tells the story of astronomy student Kate Dibiasky (Jennifer Lawrence) and her professor, Dr. Randall Mindy (Leonardo DiCaprio), who make the astonishing discovery of an asteroid orbiting within the solar system. The problem is that it is about to collide with Earth. The other problem is that nobody seems to care. It turns out that alerting humanity to the fateful collision of a rock the size of Mount Everest is considered inconvenient news.


With the help of Dr. Oglethorpe (Rob Morgan), Kate and Randall embark on a colossal media tour that takes them from the office of President Orlean (Meryl Streep) – who remains indifferent – and her flattering son and chief of staff. Jason (Jonah Hill), even airing on The Daily Rip, a lively morning show with hosts Brie (Cate Blanchett) and Jack (Tyler Perry). They have only six months before the asteroid hits, and their mission to navigate the complicated 24-hour news cycle and get the attention of the social media-obsessed public before it’s too late proves to be more comical than it is. they imagined. What must be done to make the world turn its head and decide to look up?

Do not look up, will it be one more film about the end of the world where in a heroic way they find a way to save it? We’ll have to find out when it finally hits Netflix screens.

Don’t Look Up opens December 10 in select theaters and December 24 on Netflix.