A Tijuana native will be a stunt double for Nicolas Cage 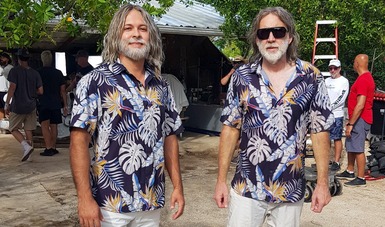 Tijuana, BC- Tijuana’s proximity to Hollywood, California, home to famous film companies, frequently offers collaborations and encounters that excite moviegoers on both sides of the border.

The Carlos Monsiváis Room of the Tijuana Cultural Center, an organism of the Ministry of Culture of the Mexican government, has given space and diffusion to the work of production companies, actors and filmmakers whose outstanding work has led them to appear in the Mecca of Cinema, such This is the case of Damián Vázquez from Tijuana, who will speak about his experience in Hollywood next Thursday, October 14 at this venue.

It will be at 6 pm when Damián Vázquez will offer the talk “The vocation of the double”, within the Independent Creators program. The Cecut invites the general public to learn more about the career of this Tijuana native and his appearances in international film productions. Admission to the talk is free with a maximum capacity of 150 people.


Vázquez has worked as stuntman, a stunt double, in various productions such as “Seized” by Isaac Florentine (2020) and “The Retirement Plan” by Tim Brown (2021), which led him to sign an exclusive contract to be stuntman Oscar- and Golden Globe-winning American actor, director and producer Nicolas Cage in his next film.

“Being the double risk of any actor who has been awarded the Oscar is the highest aspiration to which one can reach in front of the camera”, assures Damián Vázquez who also participates in the action film, currently in post production, “How I Got There ”by Zeyad Alhusaini.

Damián Vázquez is known among his collaborators and friends as “The Cobra”, he is a former lieutenant of the Mexican Navy Secretariat, has 20 years of disciplined work in Tijuana gyms and certifications in the use of different types of firearms , which has sustained his performance as a stunt dubbing actor in the cinema.

He has trained for his work not only in Baja California, but has also traveled to Phoenix, Arizona and San Diego, California in the United States in order to perfect his mastery in different sports disciplines, which allows him to replace actors in the dangerous scenes.