HomeGamingHearthstone: United in Stormwind, what will the expansion offer and why should...
Gaming

Hearthstone: United in Stormwind, what will the expansion offer and why should you play it? 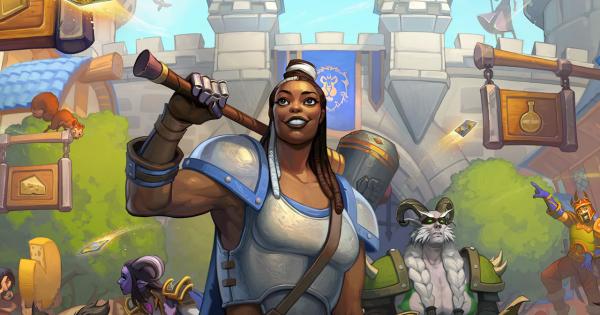 The world of Hearthstone it keeps expanding and very soon you will be able to enjoy a lot of new content. Blizzard delighted the followers of the Horde with Forged in the Barrens, so now he prepared a surprise for those who have always been with the Alliance: United in Stormwind, the new expansion of the card title.

Hearthstone It has been around for years, so it is normal that you wonder and have doubts about how Blizzard manages to keep the community active and pique their interest with each new expansion.

Well, you should know that United in Stormwind will take back part of what he offered Forged in the Barrens and will continue Blizzard’s plans for phase 2 of the Year of the Griffin. However, it will not be a simple theme change to focus on the Alliance, as it will include enough news to keep you hooked and even some players are encouraged to return to the tavern.

United in Stormwind, an ambitious expansion over the Alliance

Stormwind, defined as the representation of the values ​​of the Alliance, will offer you all kinds of activities and adventures, including new missions and the possibility of finding powerful allies while enjoying iconic places in the city.

Blizzard warned that great and sinister danger lurks within the castle walls of Stormwind. So your mission will be to face him and prevent the city from falling into ruins.

Based on this theme, its characters, the city and its locations, the developers created dozens of cards and some interesting mechanics that you will want to try as soon as you know more about them.

Many additional cards and new ways to use them

Like previous expansions, United in Stormwind It stands out for its huge number of new cards. The set will have a total of 135 cards that will be revealed little by little towards the launch of the expansion in early August.

In them we will see all kinds of characters with different abilities parade, from the human peasant worker, cooks and artists of various races, as well as prominent characters such as Dungar’s Flight Master, a special card that I will tell you about later.

Stormwind is a city full of merchants, so that’s where the game’s new keyword was born: tradable. The cards that include it can be played normally, but the striking thing is that they can be exchanged for another card from your deck for 1 mana.

Thus, this mechanic can save you from a serious predicament or give you what you are looking for to finish off your rivals. Cards of this type include Plate Armor, Rotting Viper, and Eager Traders, to name a few.

There would be no new expansion without more challenges and adventures, so Blizzard prepared the Mission Series cards, spells with up to 3 levels of progress that will give you useful rewards when you complete each one of them.

For example, The Demon Seed will ask you to take 6 damage on your turns. The mission might seem risky, but if you complete it, you will deal 3 damage to the opposing hero. Did it seem little to you? If you complete the 3 missions on these cards, a legendary minion will become your ally.

Some letters from Hearthstone: United in Stormwind

United in Stormwind also drink from World of warcraft and its tradeskills that reach Hearthstone as Tools of the trade. You will understand their concept very simply, as they are weapons that, instead of having damage, will help you in your battles with unique effects.


For example, we have the Runed Mithril Rod that will reduce the cost of your cards by 1 after you draw 4 cards. The durability of Profession Tools will decrease each time you activate their effect.

The news of United in Stormwind They are complemented by Mounts, cards that will give your minions extra power and abilities. Its benefits go further, as when your unit is eliminated it will summon the mount itself to help you in battle.

When and how can you enjoy United in Stormwind?

It is better that you prepare your strategies for the premiere of the new expansion, because United in Stormwind It will debut on August 3 worldwide. If you are excited about their news, we tell you that you can already pre-order this content.

United in Stormwind Comes in a bundle with 80 card packs, 2 random gold Legendary cards, the heroine Lady Katrana Prestor and her card back, 5 gold packs, and the alternate portrait Cantinera Ve’nari.

Additionally, you will be rewarded with some advantages for the Battlegrounds, such as the possibility to choose 4 heroes instead of 2, early access to the next heroes and more. The Megacombo of 80 envelopes will cost you $ 1100 MXN.

On the other hand, you will have the alternative of acquiring for $ 689 MXN the standard package with 60 envelopes, 2 legendary cards and the card back of Lady Katrana Prestor.

Do you want to start your collection of United in Stormwind? Note that Blizzard has already released patch 20.8 and it came with a gift for all players. This is the Flight Master Dungar card, a legendary neutral minion that you will receive and can use immediately by simply logging in to the game.

More news are on the way to Hearthstone

Blizzard already has a whole roadmap outlined for the future of Hearthstone in the next few months. United in Stormwind It is part of Phase 2 of the Year of the Gryphon, which will bring exciting new features for the Battlegrounds, such as exclusive Hero Skins.

In addition, ambitious adjustments to minion types, more content for Duels, tavern brawls, balance changes, and surprises related to the solo experience are on the way. Phase 2 of the Year of the Gryphon will also bring with it the long-awaited Mercenaries mode, which we will learn more about this fall.

Finally, Grandmasters 2021 will continue with its Season 2, which will already challenge esports players with the news and adjustments of United in Stormwind. The competition will resume on August 13 in a weekly format heading to the 2021 World Championship, where the best will meet in epic duels.

Following the launch of the newest @Playhearthstone expansion, Grandmasters are gearing up to face off in Stormwind when Season 2 launches on August 13!

🎉Check out the full schedule and format changes, including a farewell to Specialist, here: https://t.co/O6wZz7nSHA pic.twitter.com/GUaHjvqtVr

Hearthstone it is available for PC, Mac, iOS and Android. Find more information related to the card game on this page.