HomeNewsCrypto 1x1: What Bitcoin fans should know about the seasonal price behavior...
News

Crypto 1×1: What Bitcoin fans should know about the seasonal price behavior of the cryptocurrency | 15.09.21

As with stocks, the typical historical price pattern for Bitcoin can be determined over the course of the year. The Bespoke Investment Group has made corresponding calculations for the past ten years. This year’s price behavior deviated from the historical trend for a long time, but recently there has been a convergence again. If it stays that way, Bitcoin will make profits from the end of October to the end of the year if history should repeat itself. From Jürgen Büttner

In the case of stocks, September has historically been known to be a comparatively weak month. With this in mind, and given the growing popularity of cryptocurrencies, analysts at Bespoke Investment Group, which specializes in financial market research, looked at what the seasonal trends in Bitcoin have been like in the past.

The first graph below shows a compilation of the average annual performance of Bitcoin over the past ten years for each day of the year. In general, Bitcoin started the year slowly. Based on the past decade, average performance was essentially flat in the first quarter of the year, but then began to accelerate upward in the second quarter.

The strength generally continued into the first half of the third quarter, but then the period from mid-August to mid-October was the weakest time of the year, when the average annual change in Bitcoin fell from over 120 percent to below 85 percent. While the fourth quarter started rather slowly in the past, the year then usually ended with steady gains from the end of October to the end of the year. 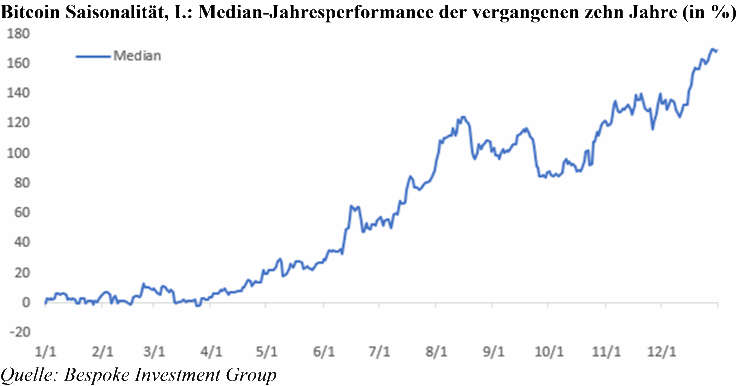 For consistency, the next graph shows the percentage of time Bitcoin has seen positive returns for each calendar day of the year over the next month (four weeks).

Historically, from 2011 to 2020, Bitcoin saw the most positive one-month future returns right around the U.S. tax filing date (typically April 14th, first red dot on the graph), according to data compiled by the Bespoke Investment Group. In any case, prices went up every ten years from April 14th over the next four weeks. In the current period of the year (second red point in the graph), Bitcoin posted positive returns 60 percent of the time in the four weeks after September 8th. 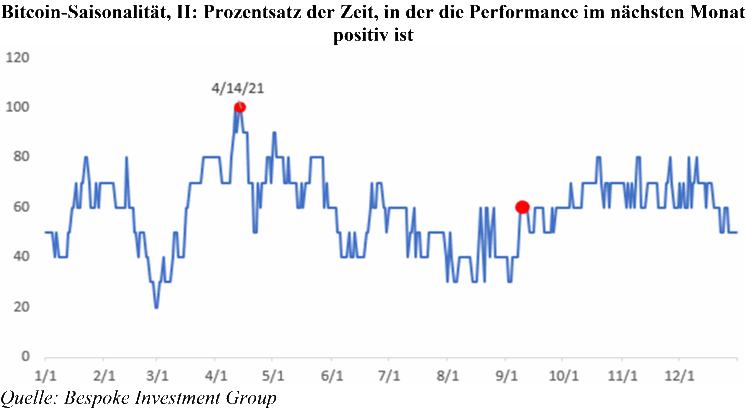 As always when it comes to seasonality in the financial markets, the Bespoke Investment Group emphasizes in this particular case of Bitcoin that historical patterns should only serve as a guide. Just because something has developed in a certain way in the past does not mean that it must also follow the same pattern in the future.

As can be easily seen, Bitcoin’s development in 2021 was almost the exact opposite of the historical pattern. Instead of starting the year flat, Bitcoin came out of the starting blocks strongly in 2021 and doubled before the end of the first quarter. From mid-April, when Bitcoin historically had the highest consistency of positive returns in the next month, the price peaked this time and quickly gave up most of the gains as the year progressed.

Bitcoin price finally bottomed out in mid-July and began to recover until Labor Day weekend, when the price briefly traded above $ 50,000 before then plummeting over ten percent.

However, as the chart also shows, the current price pattern has recently returned to the historical comparison. If this synchronization continues, a difficult time combined with a lull would have to be taken into account. But when things then continue for the rest of the year as on average in the past decade, then there will be a lively upward phase in the course of the fourth quarter up to the end of the year. A prospect that the bulls among Bitcoin investors would certainly have no objection to. 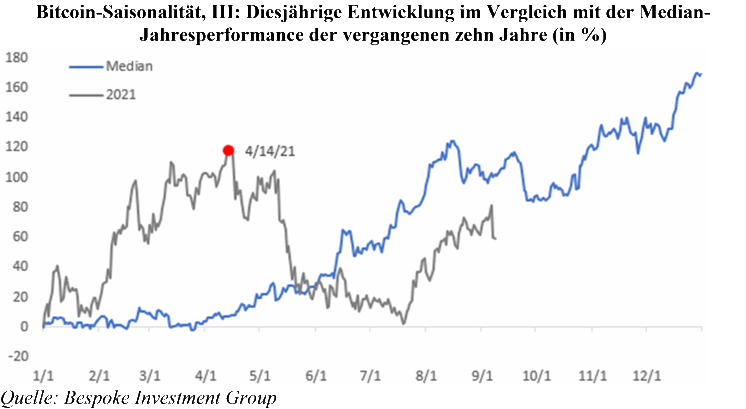