HomeNewsBitcoin: Do we see an extremely strong Q4 or is the market...
News

Bitcoin: Do we see an extremely strong Q4 or is the market going back to diving? A management report

The elegant mathematics behind Bitcoin is not only evident in the functioning of the actual blockchain, which determines exactly how many Bitcoin there will be or how long the time periods between individual transaction blocks are. In terms of price, too, the historical development is presented in a surprisingly precise cyclical movement that seems to run every four years. The mathematical structure of the Bitcoin network and the cyclical price movement go hand in hand, because according to the “Stock-to-Flow-Ratio” price model that became popular in 2019, this cycle is based on the halving of the newly generated every four years Bitcoin.

This has already happened in 2013 and 2017, in which Bitcoin was able to reach peaks of over $ 1,000 and just under $ 20,000 after an increasingly parabolic rally. Both bullish market phases had peaked about two years after the block generation volume had halved.

Even in the current cycle, after the third “halving event” in summer 2020, in which the rate of newly generated Bitcoin fell from 12.5 to 6.25 Bitcoin, the price development follows this model with impressive precision.

Historically, the fourth quarter in particular has played an important role, as all parabolic phases have so far taken place in these periods. In terms of time, this year apparently fits exactly into the four-year cycle drawn.

From a historical perspective, the fact that September currently does not want to contribute to the euphoria for a possibly strong fourth quarter is not surprising, because the Bitcoin price has been largely weak in the past few years in the September months.

If you look at the impressive synchronicity between price development and price models, it almost seems too good to be true, a repetition of the previous two bull markets seems likely.

It shouldn’t be that easy, because on the one hand the old adage counts: history doesn’t repeat itself, it rhymes. On the other hand, there are a few factors that could speak against a strong Q4.

The Bitcoin “Bull Market Support Band” as the last line of defense?

With Bitcoin, two important indicators have emerged in the past that speak for an intact bull market. On the one hand, there is the relevant 200-day trend for most assets. On the other hand, however, the exponential 21-week trend has been an extremely reliable indicator of the bull trend in the past. More precisely: Among chart technicians, the so-called “Bull Market Support Band” has emerged as a very popular indicator for determining the integrity of a Bitcoin bull market. This support band is made up of the exponential 21-week trend and the simple 20-week trend. 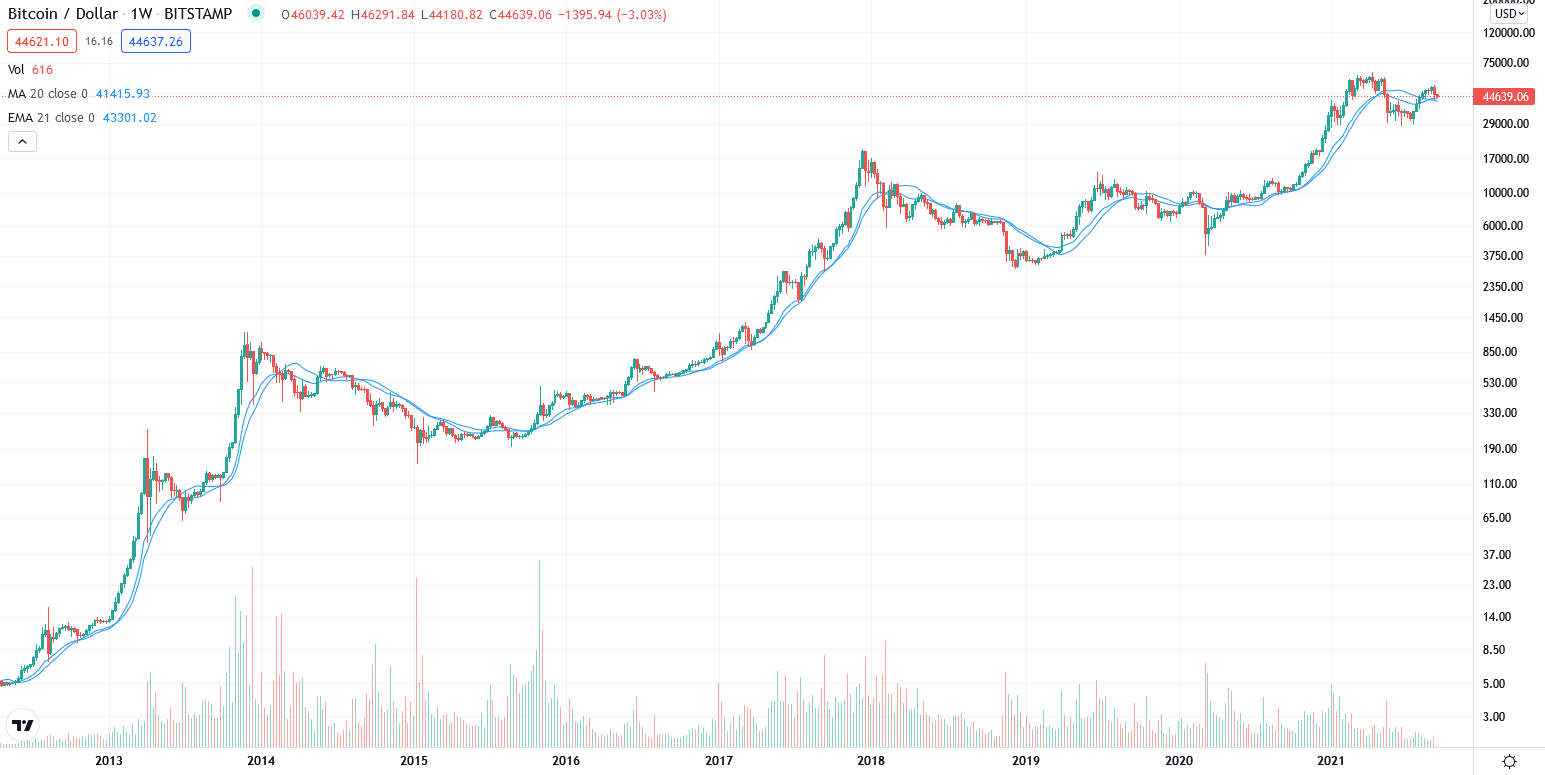 In the course of the bull market in 2013, the price went well below the support band for a few weeks after the first top in April of that year, before the cycle came to an end in a second top at the beginning of December. Many chart analysts draw parallels between the 2013 bull market and the current one. According to this argumentation, falling below the limit in the meantime is not a knockout criterion for a bull market.

So what do these indicators show? After the steep rise, which started last year with the entry of various institutional investors and which continued into the second quarter, the price is below the 200-day trend for a few weeks in the wake of the sharp correction in May , as well as slipped under the support band. The strong recovery from July onwards, however, revived the momentum and lifted the price well above these indicators.

However, the flash crash in September again caused significant damage to the chart. After an initial confirmation, the 200-day trend could not be maintained in the end. However, the initial crash found its bottom exactly on the support band and this could therefore serve as a strong support. Now it is time to defend the support band. Should this not succeed, the fourth quarter could look bleak. 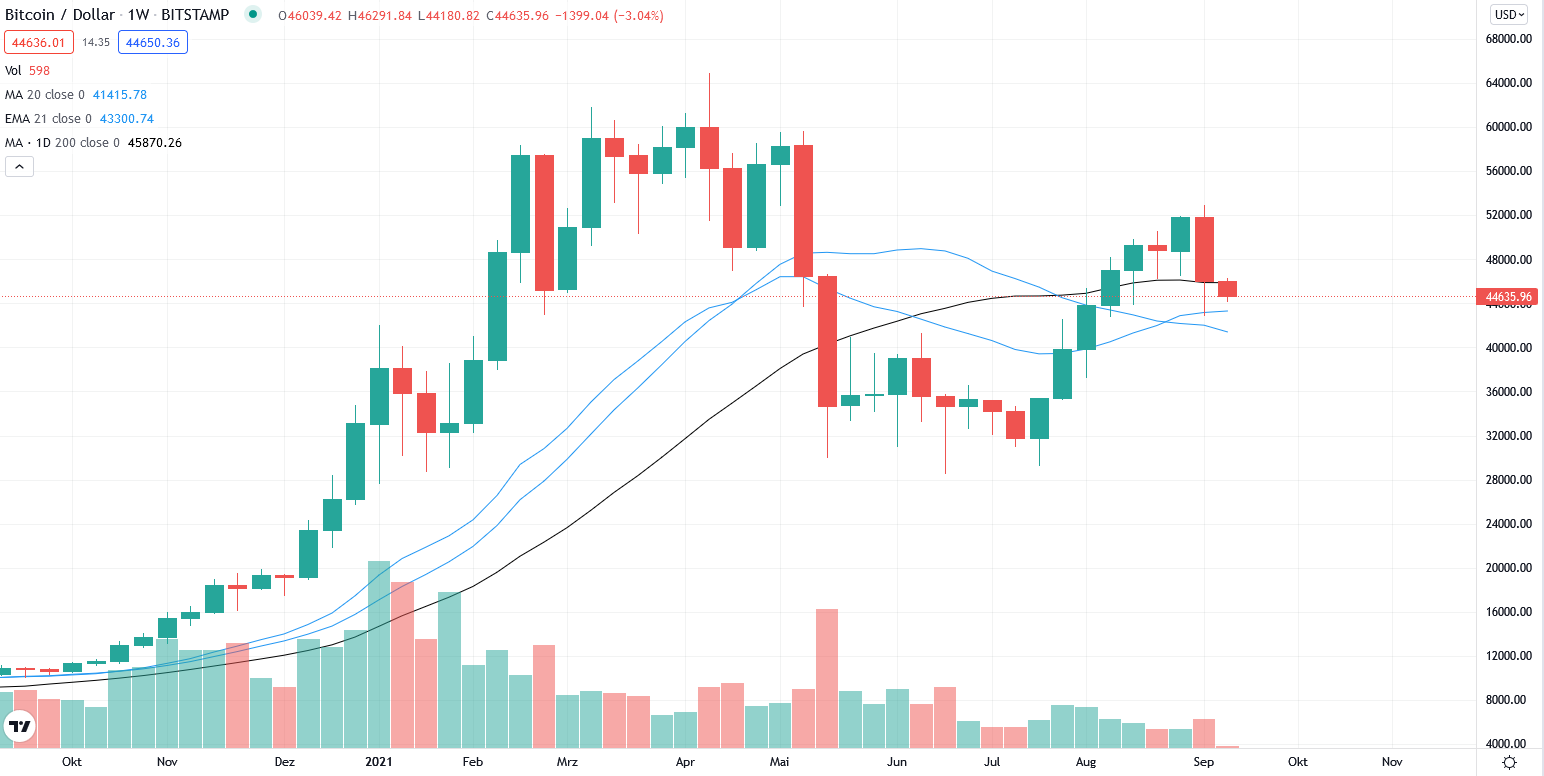 The pros and cons


On the positive side are the unchanged good fundamentals, such as the continued strong interest from the institutional sector to see a rapidly growing adaptation of Bitcoin, such as the example of El Salvador or the recent legalization in Ukraine. In addition, the Bitcoin stocks on the major exchanges such as Coinbase are dwindling again significantly after a brief increase in the course of the May crash. This speaks for a growing interest in keeping Bitcoin stocks long-term – under higher security conditions on external wallets and not on a trading platform.

The historical price development is also in line with the September crash, as a result of which a weak price performance in September should not be assessed as unusual. In addition, the most recent crash was triggered by another highly leveraged market, which triggered a chain reaction through a series of liquidations – there were no fundamental reasons for this correction.

Nevertheless, the most recent crash caused some damage in terms of chart technology. It is important to keep the support band mentioned in order to find a stronger momentum in the fourth quarter.

On a fundamental level, the hotly debated issue of stricter regulations in the USA poses a major risk that could lead to further price pressure. The planned infrastructure law should make it much more difficult for the US crypto sector in the future due to a very extensive formulation for the definition of a “broker”. According to the current version of the law, not only actual brokers such as Coinbase, but also mining companies or even developer teams of any blockchain protocols could be made liable for tax, as they are indirectly involved with transaction processing on the blockchain and thus with financial transactions in Come into contact.

Finally, it should not be forgotten that the crypto market is an asset class in its own right, but is not uncorrelated with the rest of the financial world. Should the stock markets initiate a correction in September or in the course of Q4, which many analysts consider to be overdue, this should also put the crypto market under enormous pressure, as many institutional players who are now also involved in this market are involved in a difficult market phase should first separate from the riskiest assets – as already seen in the Corona crash in March 2020, when Bitcoin made one of the most violent corrections of all.

How would things continue if the crypto market collapsed significantly this year?

If the fourth quarter does not turn out to be exhilarating, this does not yet call into question the general validity of the pricing models and the cyclical development of the market. In the end, models are a tool for orientation, the actual events always deviate from the theory, sometimes more, sometimes less. The saying goes once again: history does not repeat itself, it rhymes.

From a fundamental point of view, the crypto sector remains an investment field with massive opportunities in the long term. The adaptation of technology and the acceptance of Bitcoin and Co. is progressing faster and faster. Even if the US takes very tough regulatory action, cutting itself off from the innovation and the opportunities for its own economy, which is already very strongly represented in this sector, it will not inflict the fatal blow on the long-term development of the blockchain sector.

onvista guide: You want in Bitcoin and other Cryptocurrencies invest but don’t know how and where?

In our guide you will find all the important information about crypto exchanges and everything you have to look out for when making a crypto investment.

Are you ready to invest in cryptocurrencies?

Then we would like to recommend Swissborg to you – try the Swissborg app now via our bonus link and receive a small bonus in the form of cryptocurrencies!

https://www.financeads.net/tc.php?t=27795C106557068B&subid=newsHow to protect your cryptocurrencies:

Store your cryptocurrencies offline in a secure hardware wallet! Numerous test reports and evaluations show that the TREZOR hardware wallet meets the highest security requirements. It also supports a wide variety of crypto currencies such as Bitcoin, Zcash, Dash, Ethereum Classic or Litecoin.