Bitcoin regained the $ 50,000 mark at the weekend and has now clearly left it behind. This is an important signal not only from a psychological point of view, but also from a technical chart.

After Bitcoin had struggled with the 50,000 mark for a long time on Saturday, it was finally able to overcome it in the course of the day on Sunday. In the evening he went a step further and broke through the horizontal resistance zone between 50,000 and 51,000 dollars in one go. At $ 51,919, a Bitcoin on Monday night temporarily cost as much as it has not for almost four months.

The digital reserve currency also stood out positively on Monday morning. On a 24-hour perspective, it is four percent higher at around $ 51,800 – and thus performs slightly better than the overall crypto market, which is increasing by a good three percent.

If the breakout above the chart technical key resistance proves to be sustainable, it should give the upward movement of Bitcoin new dynamism. In addition, from a market psychological point of view, it is a milestone that can additionally fuel the interest and trust of investors. At the current level, the price is still a good 25 percent separate from the previous all-time high of around $ 64,900. 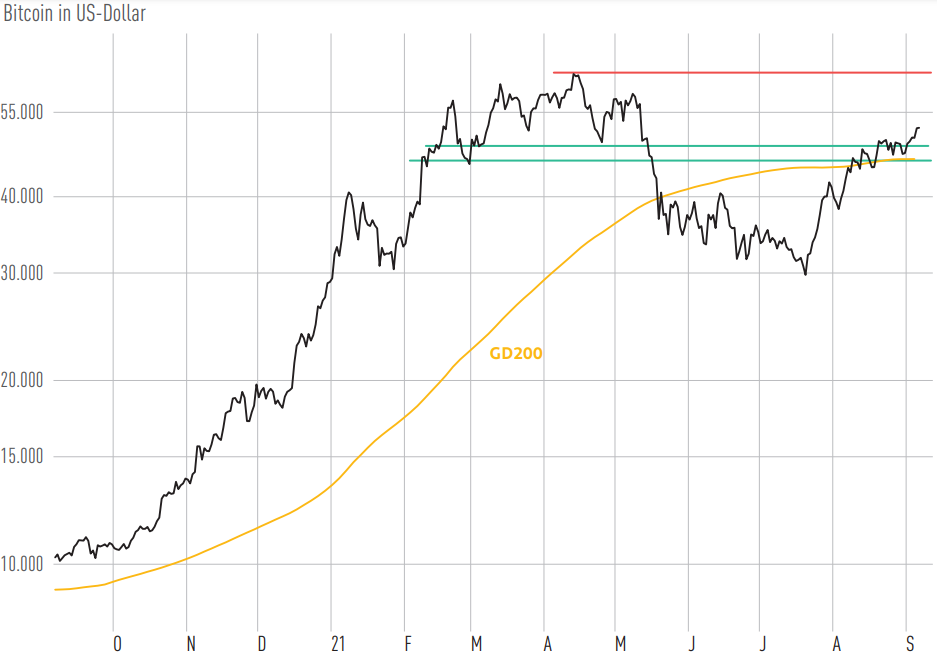 DER AKTIONÄR trusts Bitcoin even more in the long term and is betting on a continuation of the rally with a new note in the AKTIONÄR depot – more on this in the current issue (36/21). The buy recommendation for the coin as a speculative deposit addition continues to apply.

The chairman of the board and majority owner of the publisher Börsenmedien AG, Mr. Bernd Förtsch, has taken direct and indirect positions on the following financial instruments mentioned in the publication or related derivatives that benefit from the price development that may result from the publication: Bitcoin.