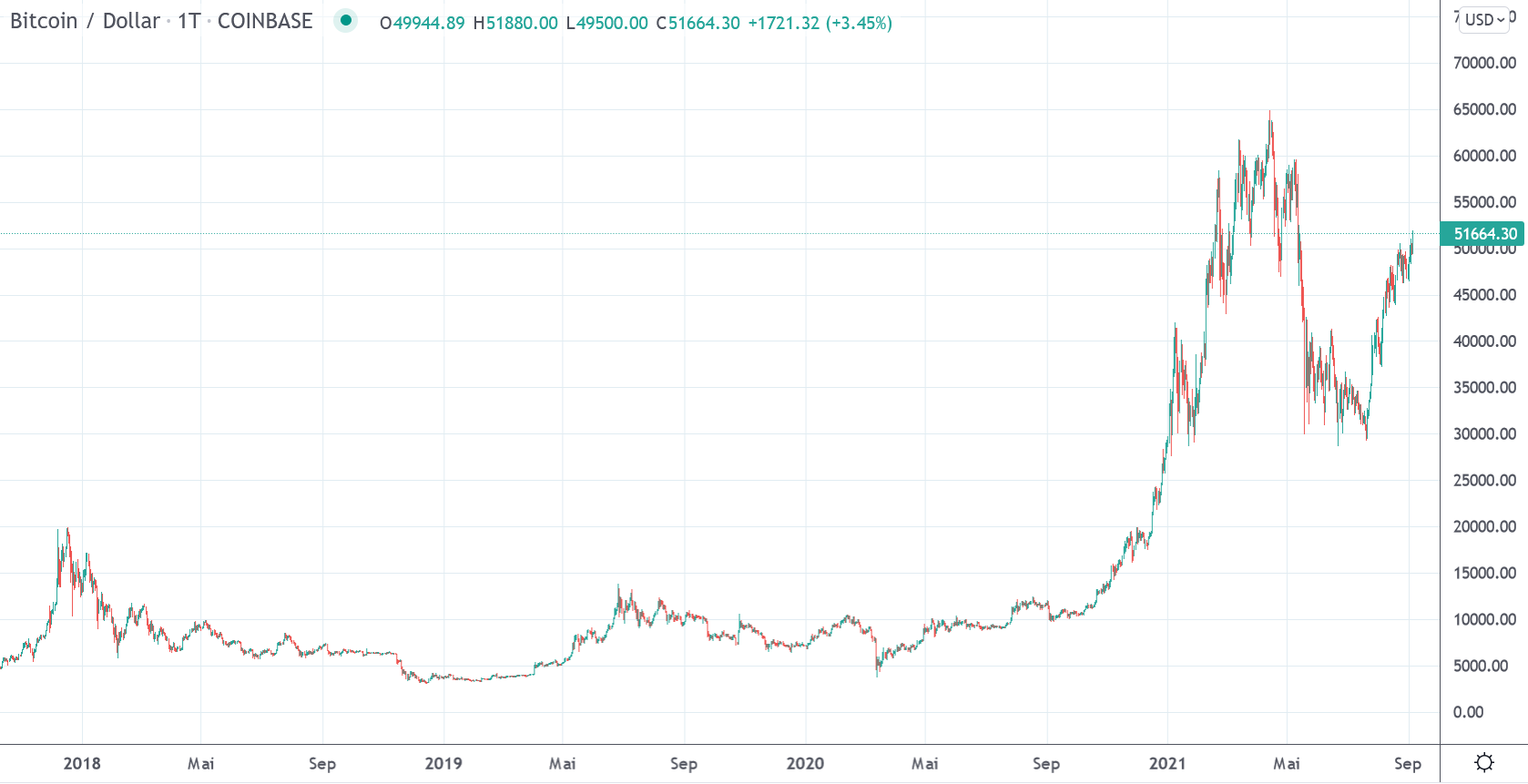 The reporting week was initially characterized by a consolidation phase, which took place just below the significant resistance zone of USD 50,000. A similar picture emerged here as with last week’s trading activity. On Monday, two trading days, which took place in narrow trading ranges just below the 50,000 mark, were followed by a correction that brought the price back to USD 47,000. On Tuesday, however, there was no further selling pressure and so, at USD 47,118, a slightly higher closing price than the previous day was achieved. The lack of negative momentum was a first sign that the market will not be satisfied with a simple bounce off the 50,000 zone. Another upward movement followed in the middle of the week, bringing the price closer to the magic area at USD 48,851. As early as Thursday, the market recorded trading activity above the 50,000 zone for the second time, at USD 50,419 at the daily high. Although the cryptocurrency was trading lower at USD 49,275 at the close of trading, the following three trading days once again saw an upward price trend. In steady sections, marked by higher daily lows, Bitcoin managed to penetrate just below the 52,000 zone by the end of the week. 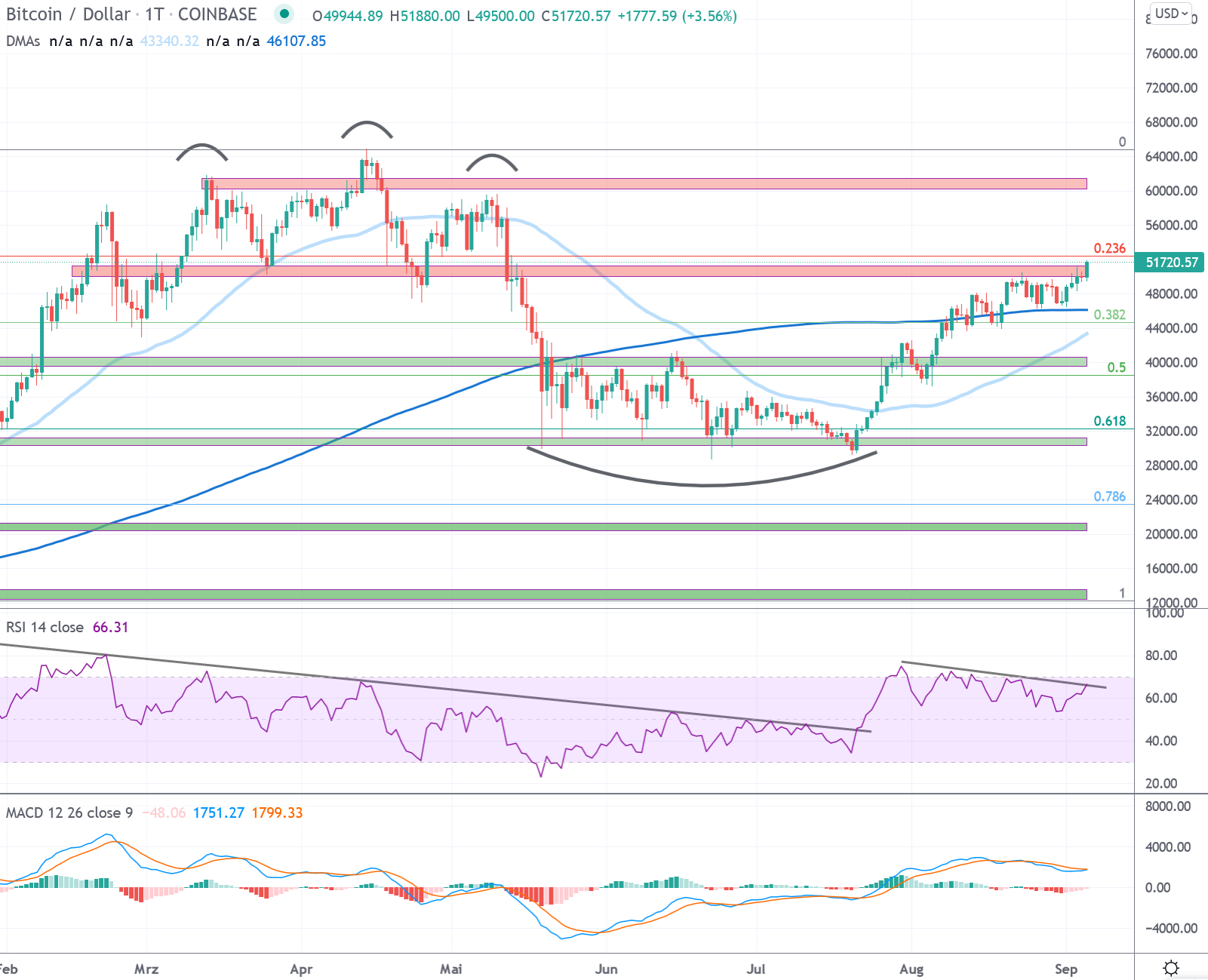 Since the breakout caused by the important 14,000 resistance at the beginning of November, things have happened in quick succession. With the breakthrough through the old all-time high at USD 20,000, the upward trend was strongly accentuated, which caused the Bitcoin price to mark its new all-time high just below USD 65,000 on April 14th. The rapid upward movement has so far been characterized by 3 corrections, each of which found its lowest point around the 50-day average (light blue line). The fourth correction, however, led significantly below this for the first time and so there was also a breach of the trend line, which has served as a support since the beginning of the year, shaped by the respective daily lows. In the past few weeks, this has resulted in an accelerated downtrend, which has led to important support areas. As a result, the price consolidated in the corridor 30,000 – 40,000 USD for three months, until the most recent breakout from the upper part of the corridor. This leads directly to the resistance zones that formed between February and May.

We are above the 11-week price corridor of USD 30,000 – 40,000. A “round bottom scenario” in the area of ​​the 0.618 Fibonacci point, which is calculated between the start of the rapid upward trend and the new all-time high, has manifested itself in a strong upward movement.


The impressive countermovement that followed the last failed attempt to break through the USD 30,000 support zone certainly came and shapes the current positive market environment. The ongoing optimistic price development brings Bitcoin directly to the resistance above the 50,000 mark and thus back into the area above the 200 daily average.

The current price area served as a support several times between February and May and is now classified as a significant resistance. The market is currently showing good momentum, marked by a steady penetration into the resistance zone. For the time being, price events are characterized by a negative RSI divergence. A continued penetration into the USD 53,000 area would remedy this shortcoming and suggests that the all-time high will soon be tested. The onset of a correction is not a big deal for the time being and should not lead back to the zones below USD 46,000 for a sustained positive picture. A longer consolidation in the current area, followed by a series of lower daily closing prices, also carries the risk of a “bull trap” becoming established. 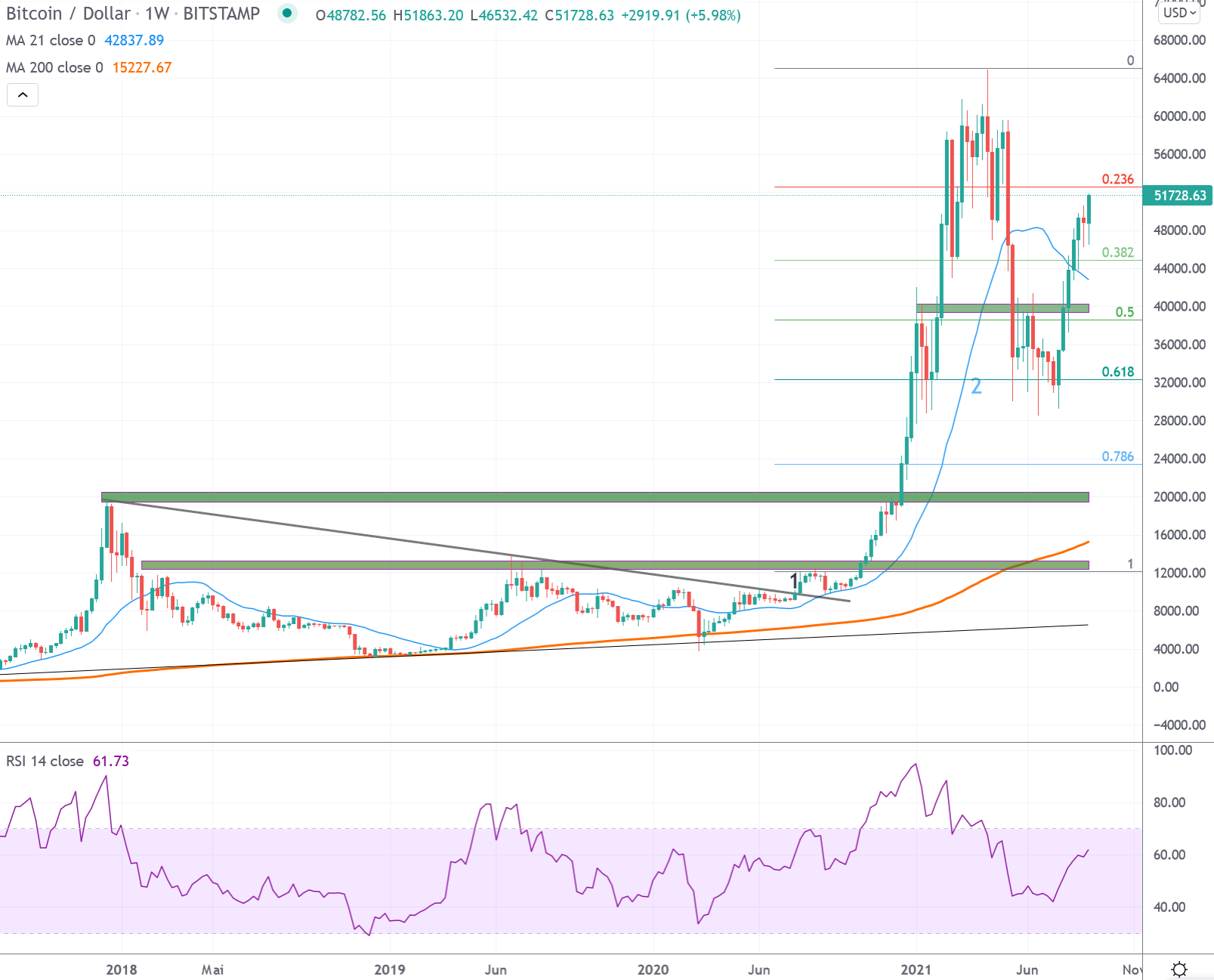 Since this first overcoming of the bearish trend, the signs of a valid trend reversal have intensified. With the breakthrough through important resistance zones and a continuous development above the 21 week average (2), the chances of reaching the all-time high set in 2017/18 increased noticeably. This was done in mid-December 2020. This was followed by a strongly accentuated price finding above this historical level, which in mid-April produced a new all-time high of USD 65,000. A consolidation initiated since then ended in a veritable price slide that brought Bitcoin back to the USD 30,000 mark in just two weeks. A subsequent breakout from the 10-week consolidation area 30,000 – 40,000 USD brings Bitcoin back to the 50,000 resistance.

With the 30,000 support in the 0.618 Fibonacci zone, a scenario of a continuing price development that ultimately leads beyond the existing all-time high remains intact. Such a scenario is reinforced by price events above the 40,000 support zone and a sustainable recovery of the 21-week average over the near future. A presumed “make it or break it” situation emerges in the current price area in the following weeks. Here the market decides whether pricing should take place above the all-time high or whether the current upward movement below the all-time high ends in a “bull trap” like in January 2018.

Risk notice
Investments and investments, especially in crypto currencies, are generally associated with risk. The total loss of the capital employed cannot be ruled out. Cryptocurrencies are very volatile and can therefore be exposed to extreme price fluctuations in a short time.