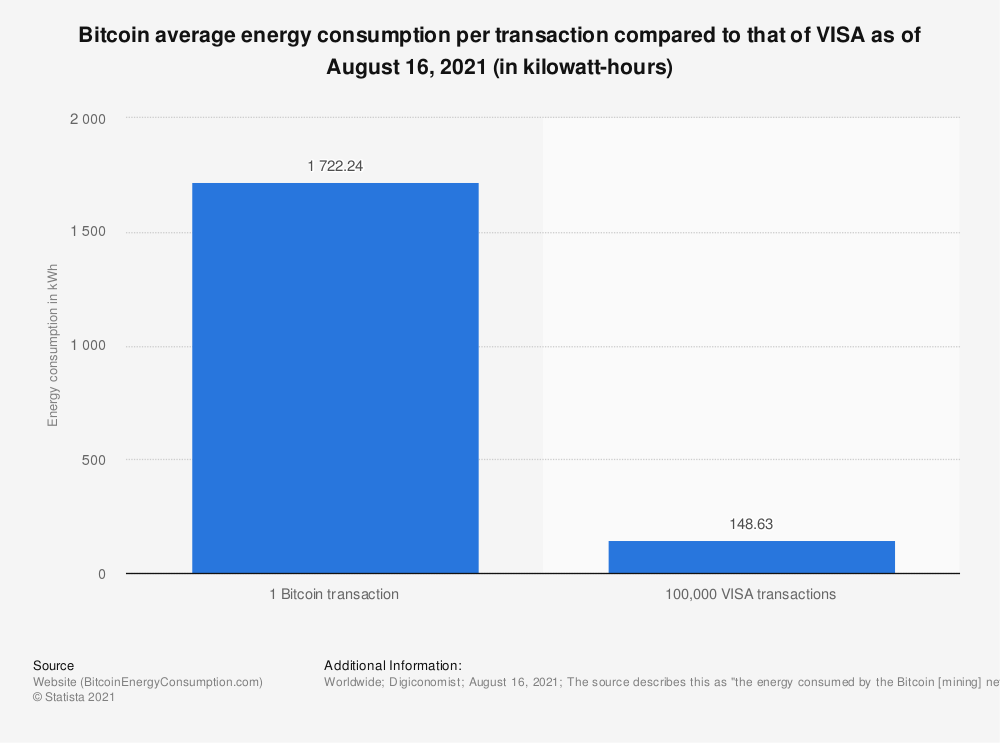 Investing.com – Crypto mining has long been considered a climate killer. The huge computing effort involved in the Proof-of-Work (PoW) process costs electricity – a lot of electricity.

The problem with PoW is that all computers on the blockchain are trying to solve the same math problem. Ultimately, however, only one of the many mining machines will find the right solution and be rewarded for it. All others go away empty-handed and the energy expended on it was in vain.

In 2018 Forbes magazine called it a “coffin nail for climate change” – and rightly so.

But since then the demand for energy has increased even further. According to the Bitcoin Energy Consumption Index, the estimated energy consumption for the continued existence of the BTC network was over 155 TWh per year as of September 1. Each individual transaction uses as much energy as the average US household does in just under 60 days.

China is kicking Bitcoin miners out of the country

Several power outages in the Chinese province of Xinjiang caused the hashrate (computing power) of the Bitcoin blockchain to collapse by 25 percent.

The authorities of the energy-hungry country put one and one together and issued a mining ban. As a result, the Bitcoin hashrate even crashed by 65 percent. A clear indication that much of the mining activity has taken place in China. In a country that mainly covers its electricity needs with coal-fired power plants.

In Iran, mining is officially allowed, but an official license is required. This is the only way for the government to have an overview of how high the share of mining in general electricity consumption is. Because electricity is in short supply in Iran.

The regional power producer believes that the illegal mining of Bitcoin, and, is the main cause of the country’s power shortage. From the company’s point of view, the illegal miners are consuming 2,000 megawatts.

“Unregistered miners are the main cause of the power outages in recent months. We would have had 80 percent fewer blackouts if the miners had stopped their activities. “

It is therefore more than obvious that blockchains are coming more and more into the focus of authorities due to their immense energy requirements.

Blockchains in the sights of climate change

Blockchain technology brings us many advantages – just like industrialization and the invention of the internal combustion engine. But while we are bringing about an energy turnaround in the face of impending climate change, we shouldn’t lose sight of energy-hungry crypto technology.

The technical possibilities and meme hype are one thing, but what about the energy balance?

Which blockchain is the most efficient? Bitcoin, Ethereum or Dogecoin?

As we already know, the Bitcoin is the climate killer par excellence among the blockchains. The BTC requires 1722 kWh for each individual transaction.

What is really astonishing is that 100,000 Visa (NYSE 🙂 transactions do not even use 10 percent as much energy as a single Bitcoin transaction.

Ethereum is already much better positioned with 62.56 kWh, followed by Bitcoin Cash and Litecoin with a little over 18 kWh. Cardano gets by with 0.54 kWh and Dogecoin only manages 0.12 kWh. Which is why Elon Musk also believes that Dogecoin is the ultimate alternative when it comes to energy requirements.


Is the Dogecoin really the most efficient blockchain?

Not really – the Chia is content with 0.023 kWh per transaction, but the Proofe of Space method used has an immense disadvantage. It is a veritable hard drive destruction machine, resulting in huge amounts of electronic waste in the form of SSDs. The hard disks are continuously written with data, which means that the memory chips have reached the end of their life cycle after just a few weeks.

With an energy requirement of 0.0079 kWh, Ripple is really one of the most efficient blockchains around. The blockchain developed for cross-border payments can also handle up to 1,500 transactions per second. Which puts Bitcoin, Ethereum, Cardano & Co. in the shade on this point as well. Still, Ripple doesn’t come close to Visa’s 65,000 transactions.

An IOTA transaction only consumes 0.00011 kWh. But even in the IOTA 2.0 DEVNET, the Visa standard of 65,000 transactions is nowhere near being achieved. So there is a lack of scalability so that this blockchain can really meet the challenges of the future.

The most efficient blockchain in the world

However, there is a blockchain technology that dwarfs everything else in terms of power consumption and performance – Proof of History.

Only two of the countless blockchains use the innovative Proof of History procedure and combine it with Proof of Stake – Solana and SafeCoin.

While there is no reliable data on the power consumption per transaction for Solana, the developers of SafeCoin calculated a value of for their optimized Solana variant 0.0000027 kWh.

While Visa consumes 148.63 kWh of electricity for 100,000 transactions, SafeCoin only consumes 0.27 kWh. Provided the numbers are correct.

“I don’t think any of the blockchains, including us, have perfect energy calculations. But what I do know is that if we were tested on it, we would be 100 percent the most efficient blockchain in the world.”

Solana, however, has a higher power consumption, since the technical requirements for operating a validator are set higher and more of these validators are required.

“Our consensus is about 1000 times more efficient than Solana’s, and Solana’s is already one of the most efficient. Our efficiency also affects energy consumption as we use fewer validators and the validators we have use fewer resources. Nevertheless, we can scale just like Solana. “

Thus, it is not one of the already established blockchains that can claim to be up to the challenges of climate change.

Ultimately, it can be said that climate change is in full swing. The ambitions to generate climate-neutral energy are laudable. It would be even better, however, to waste as little of this green energy as possible.

If you want to invest in the future of crypto technology, you shouldn’t lose sight of this aspect either. The movement for sustainability is just beginning.

In the future, some blockchains may be pulled the plug by law because there are simply better alternatives. And if you can’t imagine that at the moment, let me tell you that 20 years ago no one believed in the officially ordered demise of the internal combustion engine.

Note: The content does not represent a trading recommendation to buy or sell any kind of securities, derivatives or cryptocurrencies. All representations in this article are for informational purposes only.