HomeNewsCardano: Is the next big hit coming now?
News

Cardano: Is the next big hit coming now?

The cryptocurrency Cardano (ADA) has had a mega rally. After the announced network update previously fired the imagination of investors, the price has now been swinging sideways for around a week. THE SHAREHOLDER reveals how things are now going with the cryptocurrency.

The rally in cryptocurrencies started on a broad front around six weeks ago. ADA stands out in particular, as the price gained 176 percent during this time. Due to the price explosion, Cardano jumped two places up in the ranking according to market capitalization and is currently in third place behind Bitcoin and Ethereum. The market capitalization is currently $ 90 billion.

The sharp increase also allowed ADA to hit a new all-time high of $ 2.97. This level is also the recent resistance. On the downside, the GD20 supports at $ 2.52 and the support at $ 2.38. Due to the slight consolidation of the last few days, the price development formed a so-called rising triangle, which is usually resolved upwards. 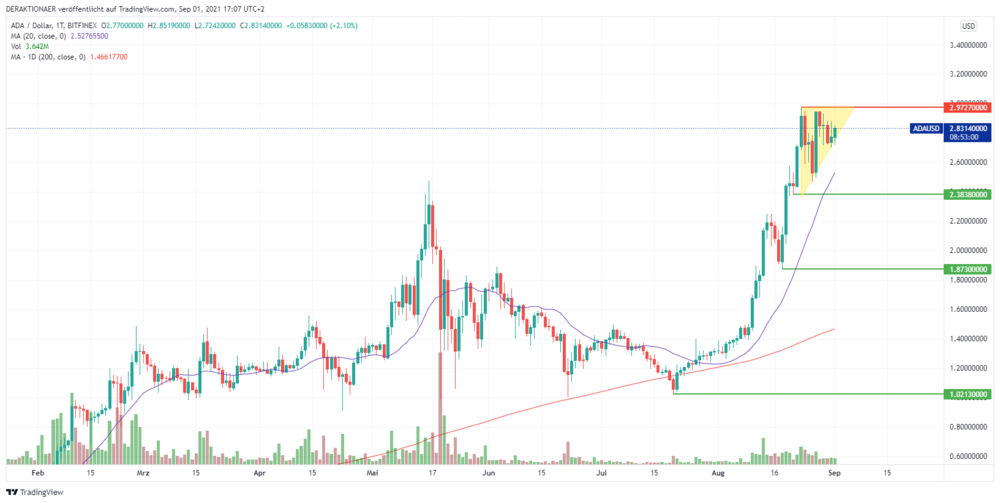 Daily chart of Cardano in US dollars

At the moment, the signs are still pointing to a rally, but the air is getting thinner and thinner as there was no noticeable correction after the sharp rise in the share price. Investors are eagerly awaiting September 12th, the day on which the eagerly awaited “Alonzo” update will go online. It remains to be seen to what extent this network update can meet market expectations and thus justify the sharp rise in the share price.

Notice of conflict of interest:

The chairman of the board and majority owner of the publisher Börsenmedien AG, Mr. Bernd Förtsch, has taken direct and indirect positions on the following financial instruments mentioned in the publication or related derivatives that will benefit from any price development resulting from the publication: Cardano.