HomeNewsDogecoin - The fun is serious
News

Dogecoin – The fun is serious

Originally intended in December 2013 as a fun crypto currency and a parody of Bitcoin and the rapidly growing number of complementary currencies, the coin with the Shiba Inu as a trademark is still in the top 10 today. A look at the creation of Dogecoin.

$ DOGE is the “funny and friendly internet currency” and thus refers to the origins as a joke. Dogecoin was developed by Billy Markus, an IBM programmer, and Jackson Palmer, an Adobe programmer. The fun cryptocurrency was intended as a parody of Bitcoin.

Initially designed for 100 billion coins, the decision of the founder Jackson Palmer to lift the limit was published on February 2, 2014. Since then, Dogecoin has had a clearly inflationary character. Starting in 2015, $ 5.256 billion new DOGE will be created every year, which corresponds to an inflation rate of 5.3% and will continue to decrease. The same proof-of-work algorithm is used as with Litecoin, the difference being that it takes just 1 minute to create a new block.

In 2013, the vision for the future of cryptocurrencies seemed relatively clear: a peer-to-peer alternative to cash that, through decentralization, made trust in financial institutions superfluous, which during the crisis of 2008 proved to be unscrupulous and often corrupt . Bitcoin, which started the movement of cryptocurrencies in 2009, brought real technical innovations to realize this vision.

Back then, the Australian entrepreneur and technologist hoped that a project like $ DOGE, through the power of the community, could help raise awareness of this technology and its innovation. Two years later, the market value was in the billions, leading Jackson Palmer to write that cryptocurrencies had attracted “shark-like scammers and opportunists”.

He complained that the industry was overrun by opportunists who wanted to make money instead of investing in the advancement of technology. In light of this, in 2015 he decided to back off from any involvement in memecoin and cryptocurrencies in general. He handed the development over to a trusted team of community members. After the meteoric rise in market capitalization in 2021, he confirmed again in a tweet that he would not be back.

I am often asked if I will “return to cryptocurrency” or begin regularly sharing my thoughts on the topic again. My answer is a wholehearted “no”, but to avoid repeating myself I figure it might be worthwhile briefly explaining why here …

Since October 2018 Elon Musk is officially an observer of cryptocurrencies and has been tweeting about $ DOGE frequently since July 2020. Dogecoin, which previously traded under one cent, jumped to 7 cents and has never fallen below $ 0.05 since then. In mid-April the price catapulted to $ 0.44, consolidated for a short time, only to reach a new all-time high of $ 0.74 immediately afterwards. 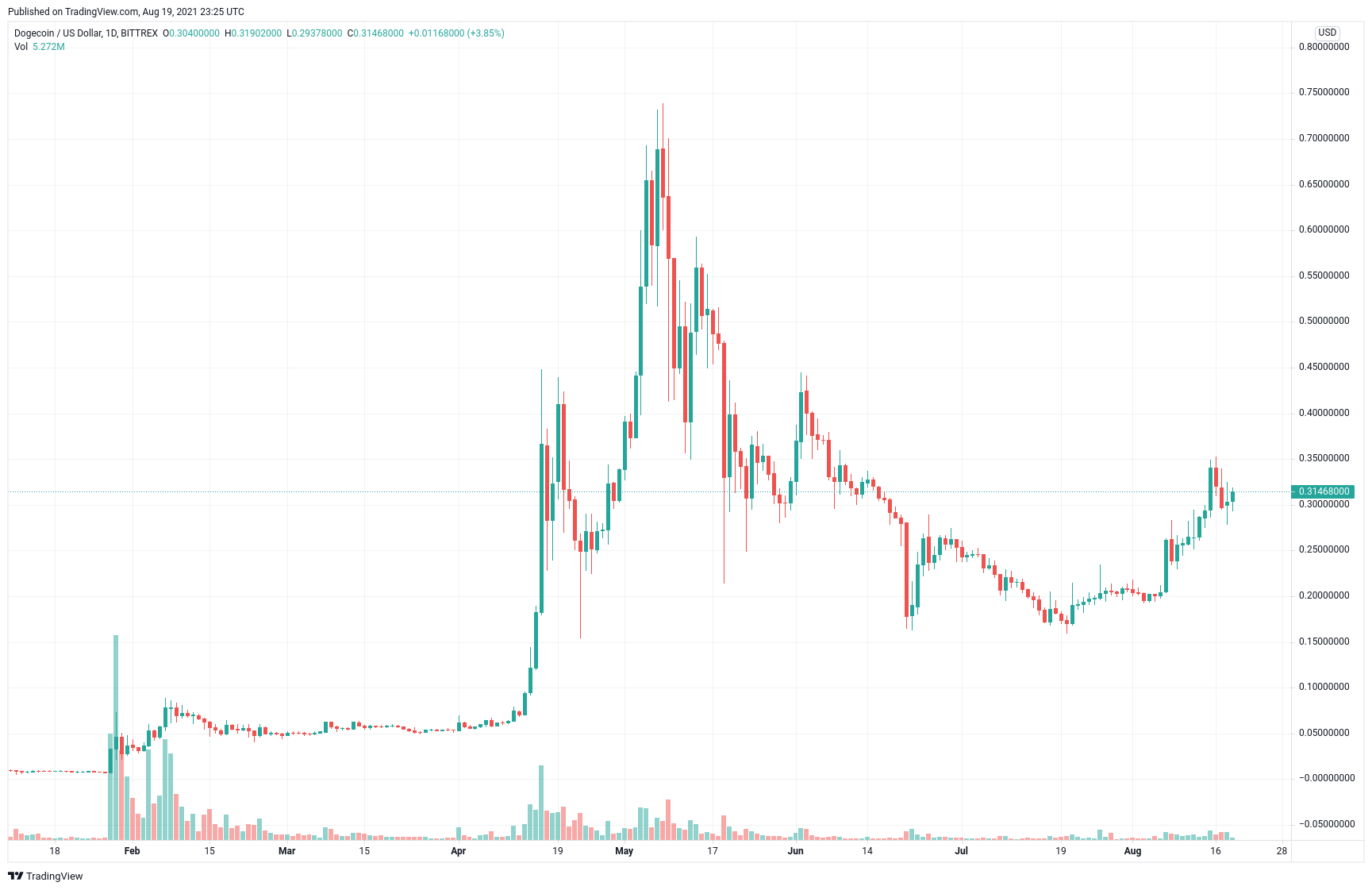 With the rise in price, the cryptocurrency attracted even more attention. Celebrities like Snoop Dogg, Gene Simmons and Kevin Jonas have also spoken out in favor of Dogecoin. The number of retailers accepting Dogecoin as a form of payment is also growing. Hotel groups, restaurants and shops for everyday use open up the new user group.

In March, Mark Cuban, the owner of the Dallas Mavericks, announced that they would be accepting Dogecoin as a method of payment. Fans could use it to buy merchandise at a discount and pay cashless. Shortly afterwards, the billionaire described the success of the campaign as fans apparently preferred Dogecoin for payments. He also promised that the Mavs won’t sell a single token.

After six years of stagnation, the foundation was reactivated in August 2021 and focuses on supporting the ecosystem. The foundation owns and will maintain the Dogecoin brand and logo for the community. This means that it can continue to protect the brand and the community (under a very liberal license) has the option to use it for Dogecoin-related memes, projects and fun. – The Dogecoin Foundation has its back on the community.

Not many people know that Jens Wiechers, single-handedly and with great personal effort, has been fighting the misuse of the “Dogecoin” brand under the banner of the Dogecoin Foundation since 2014. Trademark law has had to be defended especially recently. Numerous attempts have been made to adopt the “Dogecoin” brand in various legal systems. 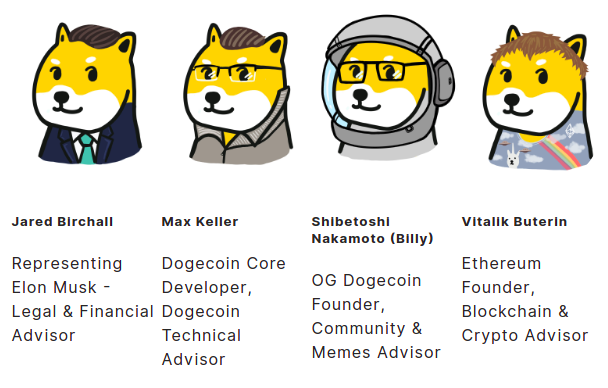 The Dogecoin Foundation Advisors provide important insights into specific strategic areas. Ethereum co-founder Vitalik Buterin has joined the Foundation as a blockchain and crypto advisor, signaling that he will help shape the future of the former memecoin. He has already expressed his support for Dogecoin and added that he would like to believe that Ethereum is also a Dogecoin in spirit, so that cooperation between the two networks could even be possible.

Tesla founder Elon Musk has been advising the team since 2019. He is represented in the foundation by his legal and financial advisor Jared Birchall. A foundation with legal status that provides a structure to recruit the full-time staff required for such a process is key to moving forward. Birchall is a former senior vice president at Morgan Stanley, serves on the board of directors of the Musk Foundation, and also manages Musk’s Family Office. The executive will represent Musk’s interests on the Dogecoin advisory board alongside Buterin, Dogecoin founder Billy Markus and core developer Max Keller.

“Currency for the people”

The Dogecoin Foundation is a non-profit organization that was formed to:

The “Dogecoin Foundation” has existed as a non-profit organization in the USA since 2014, but the latest developments around open source and the treatment of non-profit or charitable organizations in the field of cryptocurrencies rule out the foundation’s long-term establishment in the USA. Liechtenstein, on the other hand, is crypto-friendly and as a member of the European Economic Area (EEA) it would give the foundation the flexibility it needs to work with other European organizations.

The new Manifesto of the Dogecoin Foundation was published on August 15th and proclaims the ambitious goal of “developing a currency for the people”. The team’s plans are nothing less than to turn cryptocurrency, which started as a joke, into a viable payment method that you can use to simply buy a cup of coffee.

The team has revealed that new projects will be announced in the coming weeks that will enable faster integration. Arguably the Foundation’s biggest impact will be its role in promoting project development. It will ensure that the cryptocurrency, which currently has a capitalization of 38 billion dollars, is promoted in the various areas.

The Feisty Doge NFT has temporarily become the highest rated NFT in the world at over $ 110 million. The picture was already sold as NFT in June and achieved a maximum bid of 43,279 US dollars at the time. The motif is part of a photo shoot with Kabosu, the same Shiba Inu who can also be seen on Dogecoin.

I’ve created the next step in $ DOGE tokens – an NFT DOGE, a fractionalized piece from the Zora auctions a few months ago. The 100 bil tokens are backed by the NFT in the @fractional_art contract.

A resourceful NFT collector announced that he had broken the NFT into 100 billion tokens so that anyone could purchase some of the property. The tokens trade under the ticker NFD and can be bought and sold on SushiSwap. The market capitalization of the fractionalized NFT pushed Beeples Everydays out of the top spot (69 million).