Another almost 19 percent growth in the past 24 hours has pushed the crypto asset ADA – the token of the Cardano blockchain – to its new all-time high. You now pay significantly more than two euros per token for ADA – that is more than double the price compared to the previous month and has now brought Cardano to third place on the crypto charts in terms of market capitalization. Since hitting a low on July 20, ADA is up about 140 percent. 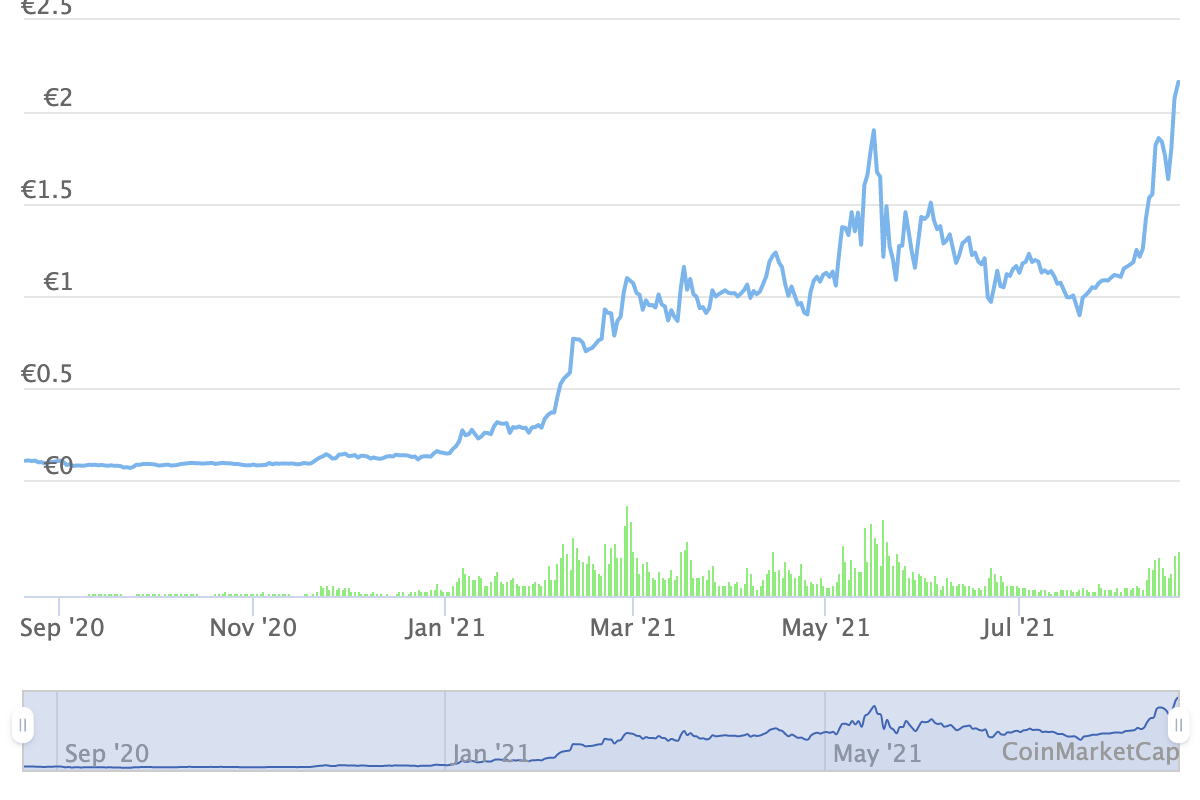 Cardano, founded in 2015 by former Ethereum colleague Charles Hoskinson, is quite a contentious thing. While some see it as a hype with little substance, others see it as a technology that took longer to get onto the market, but is also more mature. But the network still has to prove that it can keep up with Ethereum or the growing ecosystems of Solana and Polkadot.

The so-called Alonzo upgrade of the Cardano blockchain is therefore eagerly awaited. This is expected for September 12th and brings with it a very central thing that is essential for blockchain platforms: support for smart contracts. Only then make it possible for other developers to program their dApps for Cardano. Smart contracts have been around for a long time at Ethereum and several other blockchais – Hoskinson’s team has to follow suit.


Analysts see the upcoming Alonzo upgrade (hard fork) as a good time to buy more ADA. The theory: If many more transactions take place on the Cardano blockchain (e.g. via DeFi applications) in the future, the token holders will benefit. At Proof of Stake, they are rewarded with new tokens for securing part of the network with their tokens.

Cardano and Polkadot benefit from the CO2 problem of bitcoins

Attack on Ethereum and Bitcoin

But to get developers to write apps for Cardano, the project is taking a lot of money. A further four million dollars will be distributed to developers via the Project Catalyst Fund 6 – a common means of blockchain projects to get one’s own ecosystem going.

Meanwhile, representatives continue to be aggressive. In the CO2 debate about Proof of Work blockchains, Fernando Sanchez from the Cardano developer company IOHK spoke up and reported: “Cardano is a decentralized platform that can replace the inefficiencies of older and outdated systems. Because of its sustainability, Cardano and other proof-of-stake protocols are seen as part of the solution rather than contributing to the problem caused by Bitcoin and Ethereum. “

Cardano (ADA) has now reached number 3 on the crypto charts