HomeNewsCrypto 1x1: What is really behind the recent price gains of Bitcoin,...
News

The prices of cryptocurrencies have recovered significantly in the past few weeks. Market participants are therefore controversial about the decisive arguments for this. BÖRSE ONLINE shows, based on a current study, what should really be behind the strong upward movement. From Jürgen Büttner

In the past few days of trading, prices on the crypto market went down again, but overall there has been a comeback for this asset class in recent weeks. This can be seen, among other things, in the development of the two heaviest cryptos – Bitcoin and Ethereum. Bitcoin, for example, rose from July 20 to August 13 from $ 29,807.35 to $ 47,793.32. Ethereum, in turn, posted an increase from $ 1,787.51 to $ 3,322.21 in the same period. In other words, we are talking about a whopping growth of a good 60 percent and almost 86 percent.

The strong recovery of the crypto markets surprised most investors and market participants are eagerly discussing the reasons behind it. In this context, JP Morgan notes that almost three months after the previous crypto crash on May 19, neither the Bitcoin nor the Ethereum funds have seen any significant impetus from capital flows.

Instead, according to the US institute, there has been a lot of movement in futures, as can also be seen in the following chart. Because this shows the JP Morgan assessment of the net positioning changes of investors in CME Bitcoin and Ethereum futures (in number of contracts to eliminate price effects). Accordingly, the position proxies based on CME futures not only reversed previous declines, but also marked new record highs for Bitcoin and Ethereum. 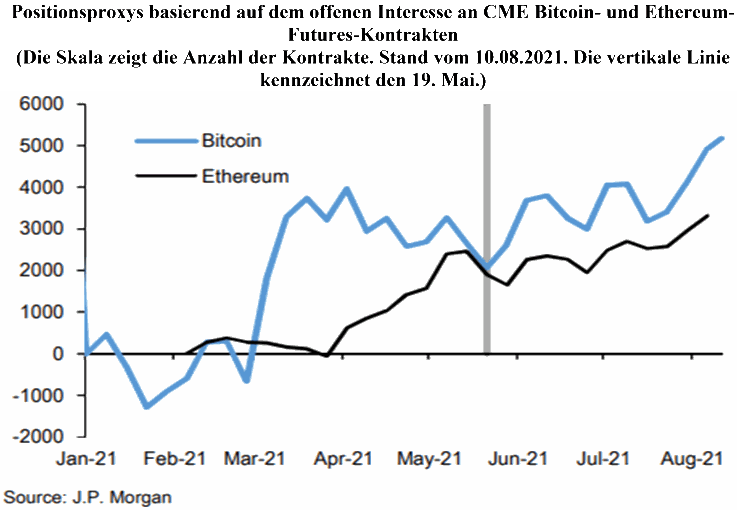 JP Morgan believes that momentum traders such as CTAs have likely exacerbated recent price gains. Because the decay of the momentum signals has not only stopped, but has even been reversed, as momentum traders have built up positions.

JP Morgan analysts recall that they had previously argued that Bitcoin’s failure to break the $ 60,000 mark would likely cause momentum signals to mechanically decline and further position closures. This is likely to have been a major factor in the correction over the past few months as it has led CTAs and other momentum-based investors to reduce positions. 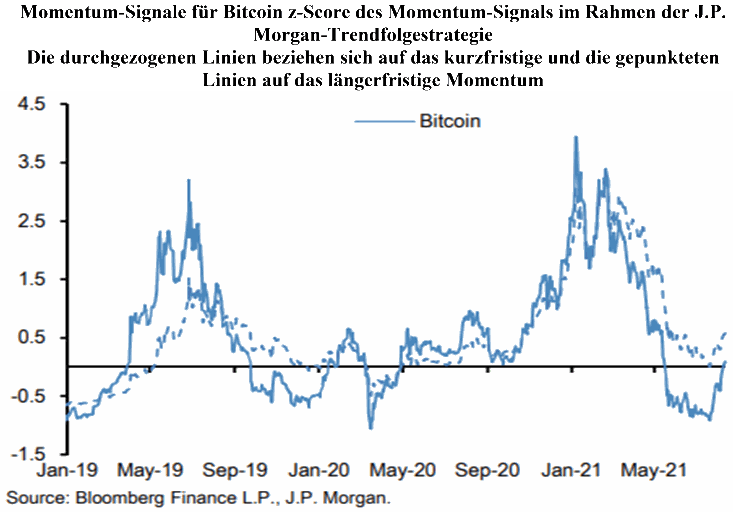 Now again it is the case that these Bitcoin momentum signals are rising, especially the momentum signal on a short-term basis. Because, as can be seen from the graphic above, the last time there was a turn from negative to positive. Usually this is when the impact on momentum traders is most felt. Because such a market environment forces them to give up short positions and build up long positions. According to JP Morgan, there are similar dynamics with Ethereum. Here, too, the short-term momentum signal went from negative back to positive.

In addition, the analysts recall an earlier thesis that futures backwardation (spot price above future price) is a bearish signal for Bitcoin and the crypto markets in general. Because backwardation is an unusual development and reflects weak Bitcoin demand and negative price expectations from institutional investors. This was the case for most of 2018 as well as for most of the previous four months. Based on previous experience, the 21-day moving average has to move back into positive territory in order to be able to assume that a previous phase of weak demand is over. This condition is now fulfilled, since the moving 21-day average is clearly in positive territory.

Another bearish signal is traditionally, according to JP Morgan, when the market share of Bitcoin in the crypto markets drops significantly. In April and May, for example, the share fell from around 60 percent to 40 percent. That was a negative signal and was a reminder of the price upswing driven by small investors in December 2017, when the Bitcoin share fell from around 55 percent to below 35 percent. From this point of view, it is not encouraging that the Bitcoin market share is stagnating at almost 45% despite the recent strong boom in the crypto markets. In any case, the US institute would prefer this proportion to rise to over 50 percent.

Conclusion: Overall, there are clear signs of an improvement in demand in the futures markets, indicating increasing institutional demand for cryptocurrencies. Momentum traders like CTAs have likely amplified recent moves as the shorter-term momentum signals have moved from negative to positive. Experience has shown that this leads momentum traders to abandon short positions and build long positions.