HomeNewsCrypto market back at over $ 2 trillion
News

Crypto market back at over $ 2 trillion

It may be the comeback of the year: the crypto market has rehabilitated itself after the hard crash in May and has now regained the $ 2 trillion mark. Since July 20, i.e. within less than a month, the market capitalization has grown from 1.2 to just over 2 trillion dollars – a jump of 40 percent or 800 billion dollars (= more than Tesla on the stock exchange) in a short period of time is worth).

The resurgence of the crypto market, how could it be otherwise, is being led by Bitcoin. Since its last low on July 20 at less than $ 30,000, this has grown by about 35 percent to now $ 47,000. Number 2 in the market, Ether (ETH) gained a whopping 47 percent over the same period and is now trading at $ 3,300. Many other altcoins are also growing strongly again – Bitcoin dominance is falling again and is heading towards 40 percent. 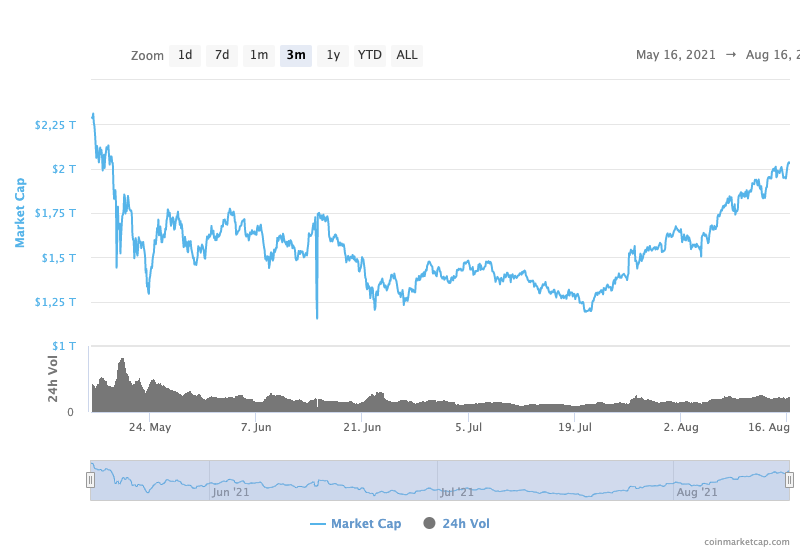 The strong new period of crypto assets has had a positive effect on the share prices of those companies that are closely related to Bitcoin, i.e. essentially Coinbase and MicroStrategy. However, as reported, market leader Coinbase also warned that a decline in trading volume is expected in the coming months – so the bottom line is that traders will be less interested in Bitcoin and Co.


Inflation and regulation as factors

The market is also being driven by fear of rising inflation, which in the USA has ensured that wages adjusted for inflation are now even lower than in December 2019. Inflation in the wake of the massive Corona aid programs in the USA and Europe were one of the reasons why small and large investors increasingly fled to crypto assets – in the expectation that prices there would continue to rise.

The noticeable efforts in the USA and the EU to stricter regulations on the crypto market are not depressing the mood – on the contrary. Stricter laws regarding money laundering and taxation of Bitcoin should now also ensure that previously skeptical investors take the crypto industry more seriously. Even setbacks such as the mega-hack of the Poly Network crypto platform, in which deposits from tens of thousands of customers worth $ 600 million were stolen (and most of them were given back a little later) did not depress the mood for the time being.

The positive mood means that analysts dare to make record forecasts again. Analyst PlanB expects Bitcoin price to reach $ 100,000 before the end of 2021 – double the price compared to today. PlanB relies on the so-called “stock-to-flow” model, which is based on the following thesis: Bitcoin halvings mean fewer new BtCs come onto the market, and the increased demand for the rare commodity is continuously increasing the price.

Hackers stole $ 600 million in cryptocurrencies in the United States