The Argentine president recently indicated that the country is open to the idea of ​​introducing the world’s largest cryptocurrency, following in El Salvador’s footsteps.

Bitcoin adoption could be a “good way”

In a recent interview with the Caja Negra, Argentine President Alberto Fernandez was asked whether a digital central bank currency was being considered in his country and whether Bitcoin would be introduced as legal tender.

El Salvador recently took the step to recognize Bitcoin as legal tender in the country. When asked if Argentina would follow El Salvador’s lead, Fernandez said that “there is no need to say ‘no’.”

The Argentine president stated that the introduction of Bitcoin could be “a good way to go”. He added that the inflationary effect in the country could be neutralized by the benefits of the cryptocurrency.

Inflation has been a problem in Argentina for some time. In July, the annual inflation rate exceeded 50% for the first time. Goldman Sachs analyst Alberto Ramos added that high inflation remains one of the top macroeconomic challenges facing the government.


President Fernandez stated that he is approaching the cryptocurrency issue with caution because of the nature of the asset class and its lack of awareness.

He also pointed out concerns about the volatility of Bitcoin price, pointing out the fact that the value of BTC has increased over the years.

The Bitcoin price formed a golden cross on the 12-hour chart that could drive the BTC price up.

Bitcoin price is currently securing support for the 50% fibonacci expansion at $ 44,076 before moving higher.

Bitcoin price appears to be forming an SKS pattern that will only be confirmed if BTC breaks the diagonal trendline above the 61.8% fibonacci extension level at $ 47,675.

Should the technical pattern prove to be confirmed, Bitcoin price could rise 16% from the neckline of the SKS pattern and hit the target price of $ 56,749. 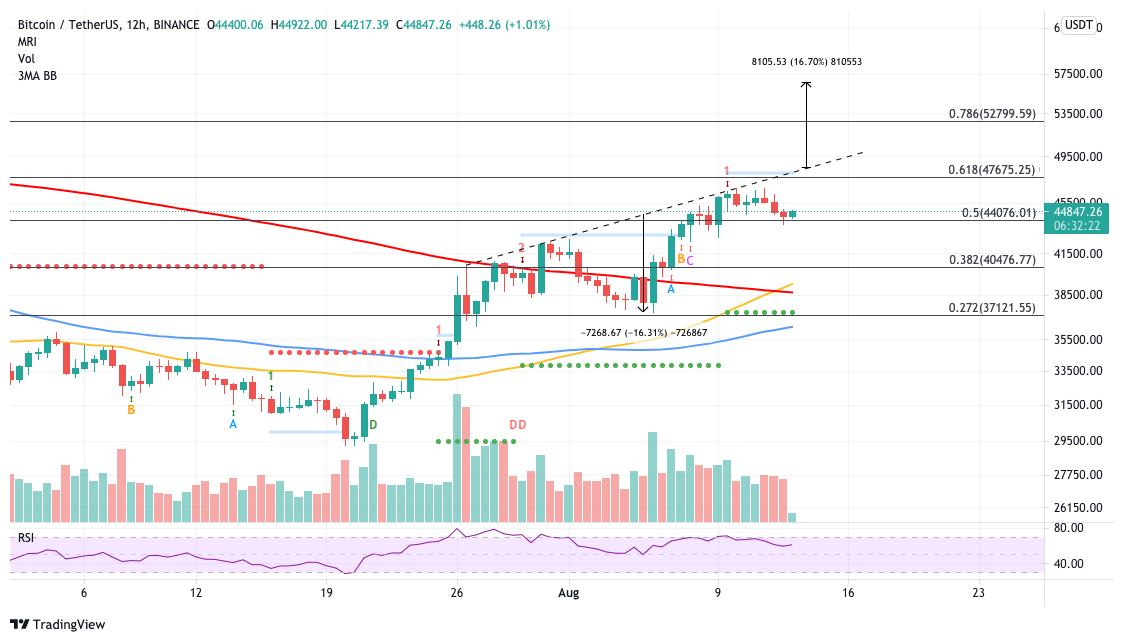 However, the Bitcoin price also has to break out of the 78.6% fibonacci extension level at $ 52,799 in order for the upward target to be reached.

Should selling pressure intensify, Bitcoin could be forced to retest the lower support level on the 38.2% fibonacci expansion at $ 40,476 before falling further to the 50 Simple Moving Average (SMA) on the 12-hour chart at $ 39,246.