The Bitcoin continues its dynamic upward movement and traded on Tuesday morning on a 24-hour basis five percent higher at around 45,700 dollars. The analysts at Fundstrat Global Advisors believe much more is possible and have now confirmed their price target of $ 100,000 by the end of the year. The reason for this is an important chart signal.

“Bitcoin has recaptured the 200-day line, now it’s time to buy,” write the experts around Bitcoin bull Tom Lee in a recent study. The reason: If the Bitcoin is quoted above the long-term trend line, its future performance is many times stronger.

Calculations by the Fundstrat analysts have shown that Bitcoin has gained an average of 193 percent over a six-month period if it is quoted above the 200-day line. In the case of quotations below this, the forward yield in the same period is on average only a little more than ten percent.

The experts’ simple bitcoin trading rule is therefore: “Buy when it is above the 200-day line.”

Fundstrat founder Tom Lee does not have a concrete explanation for the significant price increase of almost 60 percent in the last three months. The fact is, however, that it is increasing despite all the adversities – such as the legal and regulatory headwinds in China and the USA.

In the US Congress, a vote on a new infrastructure program is soon on the agenda, which also provides for the taxation of digital assets. The US Treasury wants to earn around 28 billion dollars with the controversial tax on profits from trading Bitcoin and Co.

“And yet the Bitcoin is in rally mode,” said Lee. That is also a valuable finding. His recommendation is therefore very simple: “Go long on Bitcoin and stocks related to the crypto market.”

If Bitcoin stays true to its historical pattern and gains 193 percent after the recent breakout above the 200-day line, it would cost around $ 134,000 in February. The Fundstart target price of 100,000 dollars by the turn of the year would be absolutely within the framework. 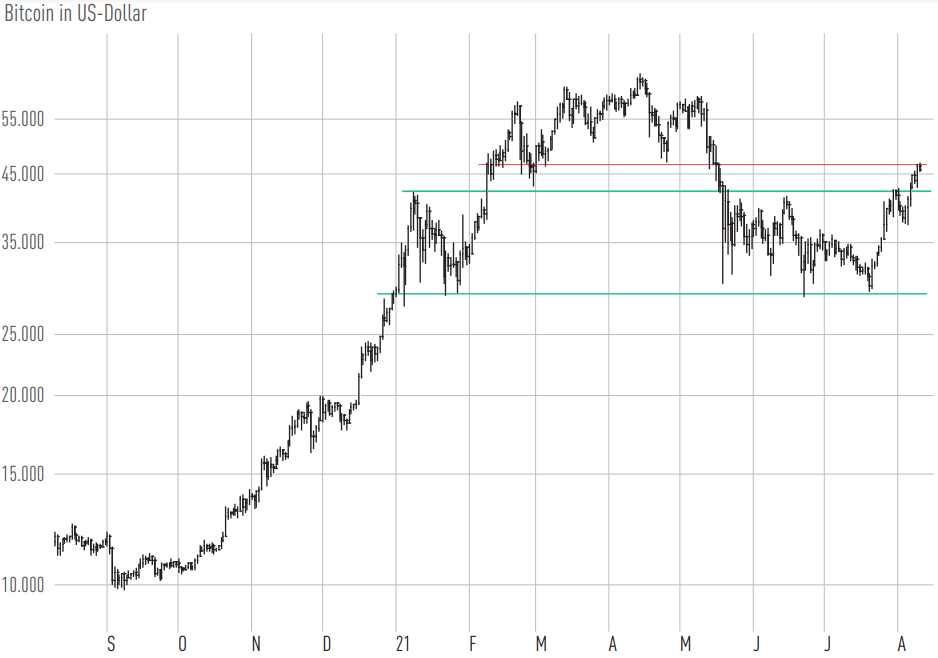 Of course, this is a model calculation and there is no automatic mechanism for history to repeat itself this time as well. But the impressive comeback on the chart and the ongoing strong fundamentals are reason enough to be bullish on Bitcoin.

Invested investors therefore stick with it and let the profits run. Courageous newcomers can also access the latest buy signals again and build up a long-term position as a speculative deposit addition.

The chairman of the board and majority owner of the publisher Börsenmedien AG, Mr. Bernd Förtsch, has taken direct and indirect positions on the following financial instruments mentioned in the publication or related derivatives that benefit from the price development that may result from the publication: Bitcoin.