HomeNewsBillie Eilish: This is how her second album »Happier Than Ever« sounds
News

Billie Eilish: This is how her second album »Happier Than Ever« sounds

In the middle of the album comes a kind of disclaimer. According to the motto »Continue listening on your own responsibility«. However, Billie Eilish is not just about listening to her music, but in the hauntingly spoken lines of the ninth song »My Responsibility« she turns against the decisive judgments that her opponents, the media, but also her fans spread about her. If she lived by it, she would never be able to move again, she sighs and asks, translated analogously: “Is my value based on your perception? Or am I not responsible for your views?”

Billie Eilish’s second album comes at a complicated point in her career. With the debut »When We All Fall Asleep, Where Do We Go?«, the then 17-year-old musician got off to an incredible start in 2019, leading the charts, winning all Grammy main categories. But with success came the haters, the fame bubble, the flatterers. Billie Eilish’s popularity, however, worked strongly, at least with young audiences, through a sense of identification. Can it still work if Eilish continues to sing about her life, but this life has become so different from that of her fans?

Billie Eilish has also allowed an unusual level of closeness as a pop star. She underlined this with the documentary »The World’s A Little Blurry« – you could see her writing songs and on a world tour, but also in relationship disputes and on the driving test. We think we know what’s going on with her. And she knows that we believe that – and knows what we don’t know. Several songs on the new album are about preserving this space of the inaccessible.

This already starts with the opening inventory »Getting Older«, in which Eilish sings about the stranger who is always waiting outside the door. In the song »Overheated« she describes the intrusion of the paparazzi into her life and wonders what news value the fact that she looks just like everyone else actually has. And even in the love songs, the side effects of fame mix: Here it is about false names at the hotel reception and the avoidance of busy lobbies, there a lover should sign a silence agreement.

But the connection of the celebrity world of the pop phenomenon with the living environment of the listeners succeeds, because the audience, who naturally moves in social media, knows very well what it means to be judged on the basis of images and statements – albeit on a smaller scale. So the identification remains, and Billie Eilish can take the next step.

On the image page, which is always important in pop, this is a reference to classic American entertainment icons – Billie Eilish already showed herself blonde on the British »Vogue«, on the album cover she throws herself into an off-the-shoulder pose. 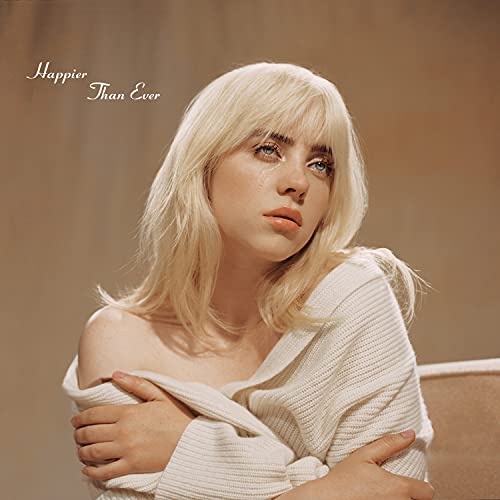 Product meetings are purely editorial and independent. Via the so-called affiliate links above, we usually receive a commission from the dealer when buying. More information here

In interviews, she talked about having heard Julie London’s »Cry Me A River« or Frank Sinatra, and this reference to the classic torch songs can be heard on some ballads: »Billie Bossa Nova« is an amazingly light-footed song about love, sex and secrets, and the beautiful consolation song »Everybody Dies« dares the art of packing existential questions about eternal life into song lines that allow themselves a childlike amazement. In comparison with the Great American Songbook Inspired Lana Del Rey, Billie Eilish never delves into allusion details and therefore does not sound retro-blissful.

On the contrary, the music that Eilish has once again written with her brother and producer Finneas once again succeeds in finding the right mix of timeless and time-typical: Sometimes »Your Power« begins with a classic acoustic guitar theme, then suddenly the autotune chorus strikes in »NDA«. While on the debut album too contemplative moods were interrupted by sometimes garish beats, the successor remains mostly quiet. Billie Eilish doesn’t lightly jeopy her reputation as an ASMR icon, there are passages of the most glorious whispers in the headphones, but her vocals are even more versatile than before, sometimes distorted, sometimes doubled, occasionally really big croons.

Takes no responsibility for the opinions of her fans: Billie Eilish in Blond

What remains is the title of the album – »Happier Than Ever«. He appears twice in the songs. In the beginning, in »Getting Older«, it is more of an invitation to oneself – a kind of personal version of the »pursuit of happiness« from the American Declaration of Independence: »I’m happier than ever, at least that’s my endeavor, to keep myself together and prioritize my pleasure«. In this somewhat cumbersome way, she commits to maintaining mental health – even if it can be difficult under the circumstances described.

After that, Billie Eilish lets us up close again in several pieces, she sings of the »cuddle hormone« oxytocin, of a sleepless love (»Halley’s Comet«), of the realization of having to let go of a relationship (»Lost Cause«).

The penultimate track on the album is also called »Happier than ever«, it is the clear climax: First of all, it becomes very clear, to the delicate acoustic guitar: »When I’m away from you, I’m happier than ever«. But from verse to verse, the separation song dispels any impression of a harmonious conclusion – the ex becomes a stalker, the sound threatening, “just fuckin’ leave me alone”, Eilish pleads.

There may still be a lot (and some) standing in the way of the pursuit of happiness – but Billie Eilish won’t let herself be stopped, she makes that clear on this album. The difficult second album? »Happier Than Ever« is proof that Billie Eilish can still achieve a lot as a singer and still has a lot to say as a songwriter.